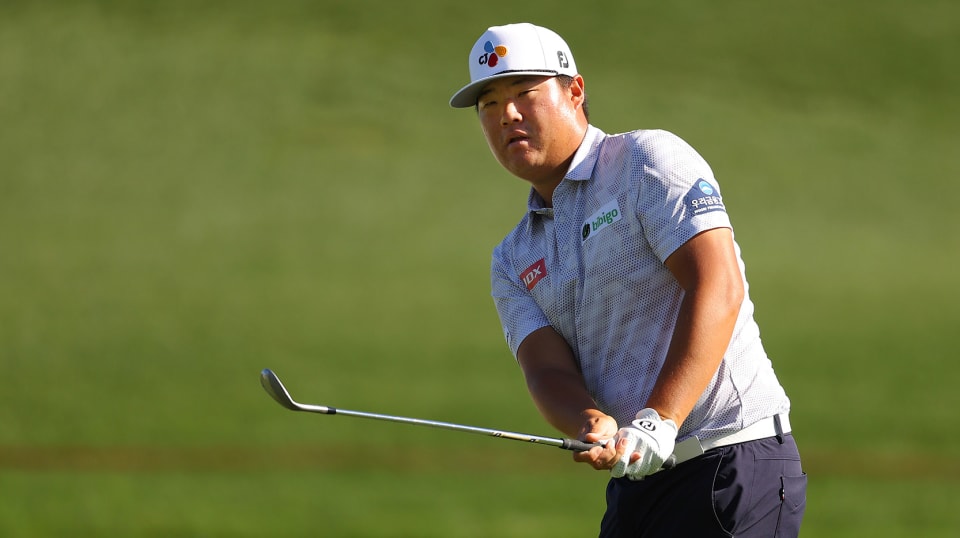 “Sungjae has a special ability to memorize, with his eyes, what he sees or screens… his ability to take a good look at something, put it in the brain, and re-imagine and then implement it… I think it is superior to anyone,” Ji Taek recently told the TOUR’s International Media division for an upcoming in-depth PGA TOUR profile.

“He watched a lot. It’s a little hard to describe but he was one of a kind in that area. And now he still reviews his swing in videos and watches other golfers’ videos a lot too.”

So Im had analyzed Scott’s swing many times before. His favorite was probably Rory McIlroy. When McIlroy played the Korean Open, a 15-year-old Im actually got a lesson from the Northern Irishman as a perk of the Korean junior system.

With all this information ingrained in his growing brain Im went about creating his own perfect swing in his childhood years. But while most kids want to learn to shape and curve the ball, Im was fixated on making it go straight. Dead straight.

“When he was a kid Sungjae was very annoyed if he didn’t like the ball he hit. Every time he takes a shot, one by one, he always had to hit the high ball on the straight,” his father adds. “From an early age. High ball, straight. If the ball draws or fades a little, he was very annoyed.”

It was this search for perfection that is part of the birth of his very slow and deliberate backswing. Im comes back slow before transitioning into higher speed on the downswing. The drills used to get a smooth tempo would eventually find their way to the course.

“When he would go to the practice range, it’s always tempo. One, two, three. I kept putting it in his head. So, when swinging back, you have to say ‘one, two, three,” Ji Taek says. “One, two, three… it must have been in his brain… I repeated it for one to two years.

“But now it is slower than that. Originally, his swing tempo was at that level, but his swing seems to have been slower since the Korn Ferry Tour. That’s the rhythm that only he has kept on his own.”

In the fifth grade – Im began playing junior tournaments on the mainland. Jeju Island sits off the southern tip of South Korea’s mainland with Seoul about an hour flight away. It was actually a wrong turn looking for the golf course one day that would change his trajectory.

“One day, he participated in a competition held in Cheonan, and we went to the (nearby) driving range by accident,” Ji Taek explained. “About 10 academy students are there training under a pro coach. Sungjae was very envious when he sees it. I asked him if he wanted to be in the academy. He immediately replied that he wanted so. So, after consulting with the pro and the academy director, I put Sungjae into the academy.”

From there he was able to put full focus on his golf. When he reached high school his coach was Hyun Choi – a mentor he continues to work with today. Im often sends video back to Korea for his coach to analyze, they discuss drills, and Im puts it into practice. During the COVID-19 pandemic break in 2020, Im flew Choi out to the U.S to keep their work going.

A great swing is one thing – but a great competitive drive and mental game is another. It was the emergence of these traits that saw Im become one of the best young players in the world and had good judges suggesting the U.S. was the place for him.

He turned professional at 18 and conquered every step put in front of him. Im’s parents couldn’t help but be amazed by their son’s quick progress through various Q-School stages in Korea and then in Japan. He held the fifth-best scoring average on the Japan Tour in 2017 and while his top finish was a runner-up – it was a ringing endorsement from a local legend that would have the Im family thinking of taking a run at something bigger.

Shingo Katayama – a 31-time Japan Tour winner who also has two top four finishes in majors – played with Im that season. He walked away telling some of his friends he’d seen the future. In his opinion Im was perhaps the only player on that tour with PGA TOUR proficiency. One of those friends, Han Lee, passed on the information to Im’s parents.

“When we heard it, we were so excited. Sungjae, his mom and me. All of us. The legendary permanent seeded player, Katayama Shingo praised him!” Ji Taek beams even now. “Further, it was not just an ordinary praise, but specifically rate him as the only one who can go to the PGA (TOUR). That was when Sungjae was 18 years old and in the first year of Japan Tour.

“We had never thought he had such potential. We just thought it would be nice if Sungjae played on the Japan Tour. When the legendary Katayama Shingo expressed about it, that’s what made a milestone for us. We should go to America!”

The family gave themselves a three-year target to progress from the Korn Ferry Tour to the PGA TOUR. He needed just one year – winning in the season opener and the season ender – and the rest is history.

In 2019 in his rookie TOUR season he played 35 times – gaining a reputation as an iron man for doing so. Hotel-to-hotel living was actually preferred. His parents in one room, he in another. Im played golf. His parents did the rest. They continue to act as a traveling team to this day and not a round goes by without seeing his folks watching his efforts.

But after a few years of the same pattern the golfing nomads have recently put down roots – in Duluth, Georgia – buying a house near TPC Sugarloaf. They’re still coming to terms with it but didn’t make the decision lightly – canvassing many Korean golfers that came before them.

“When I was on the Korn Ferry Tour three years ago, I practiced at Sugarloaf a lot,” Im says. “At that time, after seeing this place and feeling the atmosphere of the course, I had already thought that I would definitely want to settle down here. I like the environment where I practice, and I really like it because the atmosphere itself is good.”

And so now the next step awaits. Im’s goals have shifted to more wins and better efforts on the biggest stages. He has 16 career top 10s so far – but only one of these came at a major, THE PLAYERS, a World Golf Championships or in the FedExCup Playoffs. Im battled with Dustin Johnson but ultimately finished as runner-up last November in his Masters debut.

Further to that, he likes to keep an eye on lists and his place on them. Like securing a Presidents Cup slot for a rematch against the U.S. in 2022 and climbing up the FedExCup standings and world rankings.

“Currently, my President’s Cup ranking is at the top and I want to keep it there. I haven’t won this year yet, but I want to win once,” Im says. “I want to get good results in the majors this year. Besides that, what I always want every year is to attend the last TOUR Championship and finish off with good results.”

Given he’s continually exceeded all of his goals as his journey has evolved don’t be surprised if in a few months he’s a major-winning, Olympic-medal winning, FedExCup champion.