TaylorMade 300 Mini Driver Review – Go back thirty years and a ‘mini driver’ would have been known simply as a ‘driver‘, because every single head was that size. Nowadays, pretty much every driver head is 460cc and this provides golfers with a more forgiving option, which means that they can swing faster and achieve easy launch and distance. 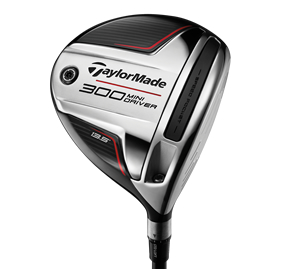 I first remember the shift in size occurring in the late 1990s, when the Callaway Great Big Bertha was released, and drivers seem to have grown bigger and bigger ever since.

The Mini Driver first came to our attention when Phil Mickelson adopted the strategy of having two different drivers in his bag – a fairway finder and one to ‘hit bombs’.

Unsurprisingly, Mini drivers have smaller heads, slightly more loft and a shorter shaft, so they are more like what I would have traditionally called a 2 Wood.

Earlier this summer, TaylorMade brought out the 300 Mini Driver, which is the follow up to their Original One of 2019 and pays homage to the 2001 300 Series Driver which I gamed as a junior. Time to roll back the years, this should be an interesting one…

Described by TaylorMade as mini and mighty, this club is said to be suitable for both tee shots and shots off the deck. The brand also say that it is more forgiving than a standard fairway wood, and I assume that this is down to the size of the head, as much of the technology is very similar to that of a fairway wood.

The head size is 307cc (so not exactly 300!) and it features plenty of the same technologies that you see in TaylorMade’s other wood products.

Forgiveness comes via the Twist Face, which is designed to help correct shots which are struck from the toe or the heel and get them moving back towards the target.

The Thru-Slot Speed Pocket technology powers the club, as it enhances sole flexibility at impact to add ball speed, while also improving forgiveness on strikes low on the face which is a common pattern with woods off the deck.

The head is made of carbon, allowing engineers to lower the CG in order for the ball to launch higher off the tee and ground.

Another piece of technology that has transferred over to the Mini Driver from TaylorMade’s fairway woods is the V-Steel Sole, which was present on TaylorMade’s older woods and has been reincarnated. The 54g plate has been redesigned to provide the best possible turf interaction and launch the ball high with low spin.

The 300 Mini Driver is available in either 11.5 or 13.5 degrees, and these lofts can be adjusted by 2 degrees up or down thanks to the brilliant TaylorMade loft sleeve.

I took the Mini 300 Driver to Mercedes Benz, Stockport to hit some shots inside on the Trackman 4 simulator. I used Titleist Pro V1x’s to compared it against the previous TaylorMade Original One Mini Driver and my own current 3 wood.

You can watch my full review via the Golfalot YouTube channel here:

The 300 Mini Driver does look better than the Original One of 2019 in my opinion, as the Lonsdale-style logo has disappeared from the sole and the cheap-looking headcover has been much improved. Their is a nice balance between vintage and contemporary.

Down by the ball, the clubhead doesn’t really seem that much bigger in size to one of the bigger fairway woods like the Callaway Epic Max.

The crown is all black with a subtle white TaylorMade logo to help you line the ball up. The carbon look means that it is similar in design to the SIM2 Driver, albeit much more conservative in colour – I liked it.

The face is a traditional steel colour which matches the V-Steel plate on the sole, and the Speed Pocket and rear weight are clearly visible. The design is similar to the old 300 Series driver, but with the added technology of a modern club.

Hitting from a mat does mean that you get a perfect lie every time though, and so I imagine that things could be a little different when hitting from the fairway or even longer grass, if that’s what you wanted to use this club for.

Like me, you may be then thinking why not just call this club a 2 wood then? But I suppose they have to justify the extra £70 that they are charging by calling it a driver, not a fairway wood…

My first few shots were nice, carrying around 200 yards with spin rates in the low 3000s and a very straight flight.

Compared to my current Titleist TSi2 fairway (15 degrees) the Mini Driver looked a lot bigger, but the fairway actually went a couple of yards further in the air.

I returned to the Mini Driver again now that I was fully warmed up to try and get a little more out of it. I absolutely ripped one and it carried around 205 yards, running out to 230 yards. The flatter, low spin ball flight meant that I just wasn’t achieving the same easy carry as I was with my 3 wood that has a much higher plight, despite the fact that it has more loft and a shorter shaft.

This club didn’t get close to my driver in distance (my current driver carries 225 yards) and as it says driver on the head I wanted more. I can’t help but think again, if it said 2 wood on the sole, I would have been happier with my findings.

I then put the 300 Mini Driver up against the Original One Mini Driver. Is it worth changing for the new model?

I had 205 yards carry, 229 yards total to beat, and the Original One carried 206 yards and finished at 225 yards. The ball flight was a touch higher, but it was very similar in everything else.

The 300 Mini Driver is slightly better in performance than the Original One, but if you already own that Mini Driver I’m not sure it’s worth the upgrade.

At £369, I can’t see any performance advantage of paying £70 more than a 3 wood that you could crank down to 13.5 degrees because the numbers would be very similar.

If you are swapping out your driver for a mini driver then it may save you a bit of cash, as they’re closer to £500. If you choose to go all Phil Mickelson then it’s going to be an expensive driver and mini driver combination, well over £800.

This is such a niche club. It is aimed at the golfer who may be traditional in their thoughts of how big a driver should be or somebody who hates their driver and loses all confidence when they have to tee the ball up high.

Having that bigger head normally makes people think ‘the bigger the surface area, the better’, but there are still some golfers who prefer the smaller shape as it helps them to feel more in control.

In my opinion this feels like a SIM2 Ti 3 wood in a bigger head and slightly more muted colours, it even has pretty much all of the same technology and the same price tag. My dispersion was better in terms of both strike and accuracy as you would expect it to be when comparing a driver and a fairway wood.

The club does fit where TaylorMade want it to however, exactly between a driver and a 3 wood, and the performance reflects this.

This club is really aimed at two completely different golfers. The first would be the likes of Phil Mickelson or Henrik Stenson, somebody who doesn’t see distance as a issue but who wants something reliable that they can use to find fairways.

The other golfer would be a higher handicapper who struggles with their driver and may be put off by the bigger head shape – although I’m not sure how much use these golfers would get from hitting this club off the ground?

I wouldn’t, as I love my driver and it is too big behind the ball compared to a 3 wood. I tee my golf ball up so high that people often ask me about it, so having to tee the ball down for this club wouldn’t help with my intended higher ball flight. As a result, I’d be more likely to use this club off the fairway rather than from the tee.

This club does exactly what TaylorMade want it to do – it doesn’t go as far as a driver but it will go straighter, and these characteristics are things that I don’t need help with in my game, I could do with more distance rather than something more accurate.