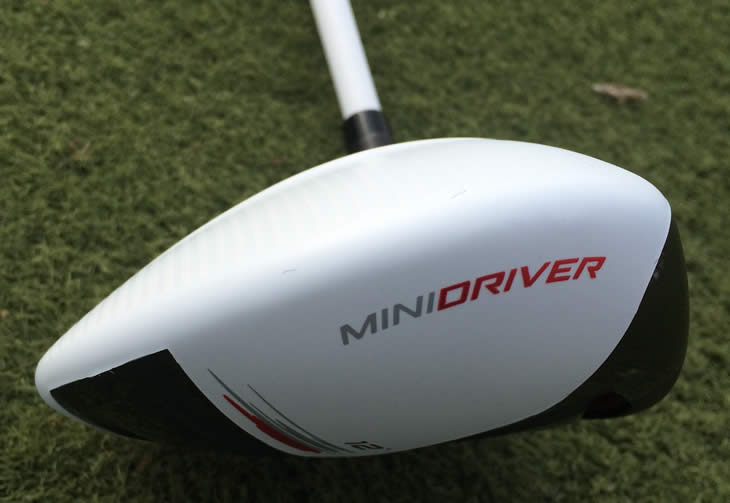 TaylorMade AeroBurner Mini Driver Review – In the good old days when it came to choosing woods there was just a driver and a couple of fairway woods to pick before you went to your irons.

Then TaylorMade introduced the Rescue club and the hybrid category expanded. Now they are at it again with Mini drivers splitting the driver and fairway in your bag.

The first to try this was the SLDR S Mini last year, which was very well received, so now they have shrunk the AeroBurner driver, or enlarged the AeroBurner fairway depending on how you look at it, to create the AeroBurner Mini driver. 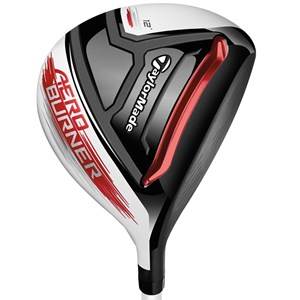 The white, titianium head looks great at address and is possibly the best of the three for me.

There are three lofts of 12°, 14° and 16° and the crown uses the same raised section and rough surface to assist with reducing drag as it goes through the air.

Aiding this is the AeroHosel fin on the rear of the hosel, which you don’t really notice as it merges into the white crown, which is there to help alignment with the black face and the subtle AeroBurner logo.

On the sole is the wide red SpeedPocket that maintains ball speed from low centre strikes and is one of the keys to the performance of this club.

Teeing the ball up gives a great sound and feel and the flight was high and strong. However hitting it from the ground is where the SpeedPocket comes into its own, as it gives that extra ball speed to get even the 12° version up and away just as easily. This loft flies a little lower from the deck than the tee, but the 14° performs very similarly from either.

On the range the Trackman data showed little or no decrease in ball speed when hit from the deck or the tee and that impressive stat was due to the SpeedPocket.

In addition, the smaller head can move through the air a touch faster than a 460cc driver, so that will help increase club head and ball speed too.

What is key to its accuracy is the 43.5 inch Matrix shaft that is 2.25 inches shorter than the AeroBurner driver, or about the same length as driver shafts were when I was a lad. This makes it more manageable to swing and there is also evidence that, depending on the golfer, a shorter shaft can increase distance because it is easier to strike the ball out of the centre of the face for maximum performance.

So is this a driver washed at too high a temperature or a pumped up fairway?

It is both and it performs very well, comes in at a good price and like the other AeroBurner woods is great fun to hit, which is half the battle.

Hitting a driver off the deck is one of my favourite shots to pull off, right up there with nailing a 2-iron, and it is great to see a driver designed for this purpose that is also great when teed up.

Unlike when you hit a driver from the deck, the Mini looked more at home behind the ball and there was no extra effort or swing change required to get it launching just like a fairway.

From the tee it felt effortless to get going and the sound and feel as you banged one out of the middle was every bit as good as the AeroBurner driver, if not better because the smaller head seems to have a little more feel to it.

However, before you run out and buy one without reading any further, you need to ask yourself one question:

Do I have room for it in my bag?

The answer will depend on who you are and what you want to use it for.

If you are a good driver of the ball and occasionally have to throttle back to a 3 wood on some holes, then the AeroBurner Mini could take on the driving role for either or both and it could also give you a longer club from the fairway.

If you are a bad driver of the ball and use a fairway from the tee for safety reasons then the Mini will give you some more distance from a larger, more forgiving head that still has a similar amount of loft to your fairway if you went for, say, the 14° version.

Better players who play golf a lot in wind or on links may like the option of a stronger lofted wood to hit from the fairway to keep the ball down.

The 12° Mini probably requires an above average swing speed to be effective from the fairway, so if that is not you then the 14° would still be a good choice as the larger head and slightly longer shaft should still go further than the equivalent fairway.

Others may decide to reconfigure their bag with the 14° Mini and then add the 18° AeroBurner #5 fairway before going to hybrids in order to keep the distance gaps and that would be a good call too.

The key is to get the loft gaps right in your bag, so give it some careful thought as TaylorMade expect 50% of golfers to use it as a driver replacement and the other half as a fairway replacement.

Given the AeroBurner range has a broader player appeal than the SLDR, the AeroBurner Mini driver could herald the start of another new category in golf, so I would strongly recommened taking it for a test drive.