Fast forward two years and I was back out on the golf course (this time it was Prestbury Golf Club) with the newly updated waterproof version for 2021. 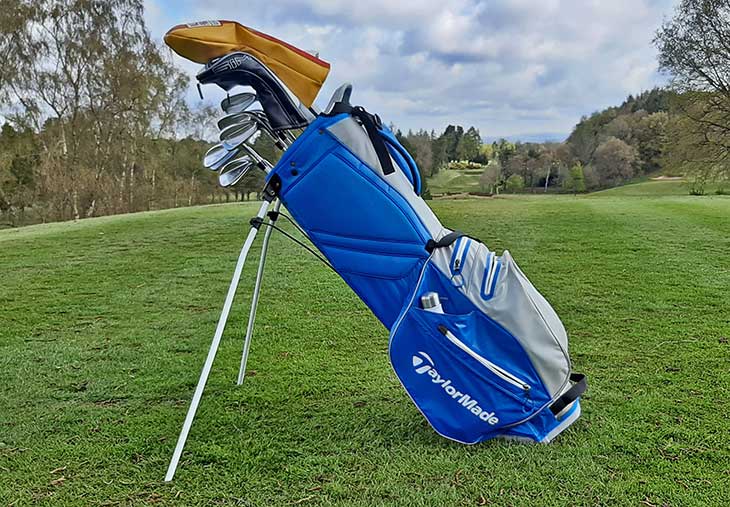 Have TaylorMade managed to make a great golf bag even better? Time to swap my clubs over and head to the first tee to find out.

This is a golf bag specifically designed for the hardcore European golfer who isn’t afraid to hit the course when the weather forecast isn’t on your side. Providing 100% waterproof protection with a lightweight and highly functional design, the new Waterproof FlexTech seems to have it all.

Other notable features to make life easier are as follows:

How else do you test a waterproof golf bag than head to a golf course in some pretty inconsistent British weather and play some golf? Having previously tested the original FlexTech, I had a pretty good inkling that it would perform well but the price tag has also jumped up another £60, so is it worth the extra cash? Let the testing commence.

I’m a fan of how TaylorMade golf bags look. In recent years I really think they’ve stepped up their carry bag game and produced some great looking bags across their line.

This design is pretty simple overall but quite contemporary with no standout bells and whistles – just the classic TaylorMade logo on the right and left side pockets. There’s not too much to dislike here, as far as I’m concerned the FlexTech looks exactly like a stand bag should.

I tested it in the striking royal blue/grey/white colourway. To be honest, if I was to buy this bag wouldn’t be my colour of choice. This colourway stands out, which may be exactly what some people want if they’re parting with over £200 for a golf bag, not me personally. Nevertheless that’s just my opinion and it really pops even on the bleakest of days thanks to the electric blue and and waterproof shell-like finish.

Other colours available are the SIM2 themed black/white/blue, navy blue/lime green and plain old black. Through the four colourways, every golfer is bound to find a model for them.

I also found the bag to look a little clunky and I wasn’t a fan of the ‘shiny’ finish (even though I understand it’s performance benefits), it all just felt a little crinkly and not really to my taste. The size of the bag and the width of the pockets also wasn’t quite justified in terms of storage space for me – the space was instead taken up by the the club section – which I suppose is the most important element of a golf bag.

Over the 18 holes there weren’t too many areas in which I could criticise the functionality of the FlexTech bag.

Firstly, how did the bag handle all of my 14 golf clubs? Considering I had a full set of 14 clubs with my irons (4-PW), two wedges and putter all having thicker grips than standard on them I was very impressed at the amount of space the bag offered. When pulling clubs out I never had an issue with any getting stuck or becoming awkward at any point. On a couple of occasions when putting my putter back in the top slot I had to move things about a little to get it exactly where I wanted but this is hardly a criticism.

Two full length dividers is all you need in any golf bag in my opinion. I’ve never been a huge fan of 14-way tops and dividers – they add weight, don’t look great and I actually think they’re more of a hinderance than a help – there’s more to go wrong.

Secondly, was it comfortable to carry for 18 holes? This was the area in which this bag really excelled. The 4-point double carry strap was a bit of a dream to carry. The straps themselves are wide, padded and very stable.

I found they sat on my shoulders well without any annoying niggles or weight distribution issues which I have found when testing other carry bags like the Titleist StaDry 4 Plus. Let’s be honest if a carry bag doesn’t sit right and becomes a chore to carry, it’s a no-go isn’t it?

I also found the stability of the straps actually made the bag feel lighter too because the weight was distributed so well across my shoulders. Good work TaylorMade.

The legs were wide and strong and never proved a problem during my test. I can imagine it staying pretty strong on even the windiest of days.

You’d do well to knock the FlexTech over in any conditions and even on slippery flooring the legs won’t get away from you thanks to the anti-split stand system. The legs don’t have ‘feet’ but I found they genuinely didn’t need it.

The main grab handle at the top and a nylon strap at the bottom makes lifting the bag in and out of a car boot very straightforward too. This may seem like a simple point but it’s amazing how many bag manufacturers get it wrong.

During my testing I also chucked the bag on the Motocaddy CUBE push trolley for a few holes and one thing I really liked was the handy little ‘tunnel’ that passes underneath the side pocket, allowing you to tuck the straps away while maintaining easy access to the contents of the bag without them getting in the way.

This, combined with the ample storage space makes this bag very versatile. It’s by no means a natural cart bag but it is perfectly functional.

Finally, did it keep my clubs dry? Yes. Playing through some pretty changeable weather the FlexTech waterproof bag had no problems in batting off any rain and moisture throughout the test.

Specifically so, I left the bag outside the clubhouse post-round whilst I headed indoors to change my shoes etc, in which time there was a huge downpour which soaked my bag. My clubs and belongs though… bone dry.

The seam-sealed zips are brilliant and if you’re looking for further protection, a decent waterproof cover is included with the bag which is simple and easy to attach if the heavens open and catch you off guard.

There is no getting away from the fact that this is a very expensive stand bag. At £239 RRP I can’t think of too many golfers that are willing to part with that amount of cash for their second golf bag just to use on golf trips, maybe in the winter when trolleys are banned, or even for that quick evening 9 holes.

That’s assuming that most club golfers have two bags: a cart bag and a carry bag.

Having said that I think the beauty of the FlexTech is that it’s practical, high-performing and versatile enough for you to only need one golf bag. If you think of it that way, £239 isn’t actually that much compared to some other golf bags on the market.

I gave the original FlexTech bag five stars as it performed well and looked great. The waterproof FlexTech has managed to carry over all the great assets of the old model whilst truly being the bag for all elements.

In the right colourway – yes. I think the navy blue/lime green one would look great down the links.