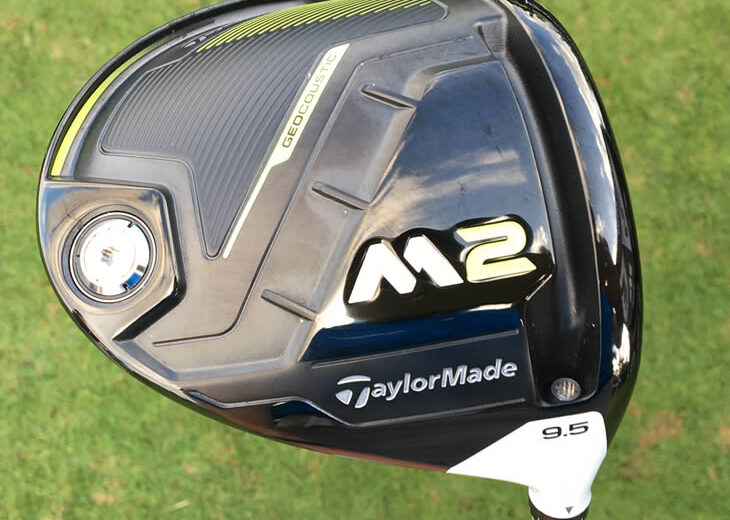 TaylorMade M2 2017 Driver Review – Sometimes things you have waited for all your life come along bit late.

Like the two highest profile athletes of one of your main competitors voluntarily switching to your product just as you launch the new version.

However looking on the bright side, with Tiger and Rory choosing the TaylorMade M2 driver in 2016 it shows that TaylorMade are on the right track and therefore the 2017 version should be even better. 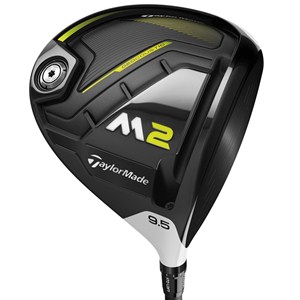 That’s what TaylorMade are banking on with the 2017 M2 driver as they use thinner 9-1-1 titanium sole combined with 6 layer carbon composite crown to give the same distinctive black and white look at address.

The white titanium leading edge is a narrower shape than the previous version, which makes the black carbon composite section larger and helps with the weight re-distribution.

The Speed Pocket has been redesigned and is three times as flexible as the previous M2, and back to the same level as the AeroBurner driver, in order to add as much ball speed as possible.

It is also looks a bit more like a Speed Pocket designed specifically for this club rather than the previous model which seemd to have a filled in space where the front weight track from the M1 used to be.

The rest of the head is also different with a new sole design that has to have a name of course and is christened Geocoustic, which is TaylorMade’s way of saying that they have used the shape of the design to improve the head..

In real terms the 9-1-1 titanium panel on the toe section of the sole has been sunk in a little, which saves volume here to enable the overall footprint to be larger.

It also has the benefit of stiffening the structure of the head, which helps the sound and means they need less sound ribs on the inside, which also saves weight to be used elsewhere. All clever stuff and worthy of its own name.

All this enables a whopping 25g to be moved low and back in the sole of the club, which improves the MOI of the M2 driver beyond the 5000 g/cm² mark to make it more resistant to twisting on off-centre strikes.

The generous face is 7% larger to widen the sweet spot further and sitting in front of the redesigned Speed Pocket increases the oomph the 2017 M2 driver can deliver.

The adjustable hosel has also been on a slimming diet and the sleeve has changed from plastic to aluminium to make it easier for fitters to switch between shafts.

In testing the 2017 M2 has a much more solid sound than the previous model and I probably preferred it to the 2017 M1 driver, which has a slightly more ‘open’ sound due to the weight tracks.

But sound and feel shouldn’t really come into this as both drivers look pretty similar at address, so it is really down to which one suits your swing best.

Like before the M2 2017 head spins more than the 2017 M1 in standard set up when I tested both as 10.5° heads. Dropping down to a 9.5° M2 head lowered the spin and increased the ball speed, but the launch also dropped so I was getting more distance, but with less carry.

Adding a bit more loft on by adjusting the hosel up two notches brought back the spin and also closed the already slightly more closed M2 face a little too much, as well as changing the balance of the head a bit too.

Therefore for me, the 2017 M1 head suited my swing slightly better as I was able to fine tune it in better, as the M2 only has the head loft and adjustable hosel option.

This does not make it a bad club as we are only talking a few yards here or a couple hundred rpm of ball spin there. It is just not optimum for me and this is the process you need to go through with a TaylorMade fitter to see which works for you best and hopefully it it not the more expensive one.

For the same price there is also a 2017 M2 D-Type version, which is a draw bias head that will add around 250rpm of spin and around 10 yards of draw to your average shot.

The sole weight is more towards the heel to promote the draw, but there are some subtle changes on the crown where the face is 1° more closed than standard.

However the shaping of the back of the white line towards the toe creates an optical illusion that the M2 D-Type head is still square at address, so you hardly feel you are hitting a draw bias driver.

It’s the first time TaylorMade has created a draw version and the subtle way it does this will make this an option for more players than you think. The M2 D-Type sounds and feels good and the draw is subtle and manageable for those who tend to hit it straight or leak the odd drive.

Overall then the 2017 M2 driver is an improvement on the previous version and, for around the same price difference of £110, offers you the looks and performance of an M1 for less.

The M2 RRP is however £40, or 12%, more than the previous version, which puts it towards the top end of the market, which is a lot for driver with limited adjustability.

Now depending on how your fitting goes, you may decide that the extra ton for the 2017 M1 driver will give you the return you want on your healthy investment.

Or maybe the 2017 M2 driver delivers for you without the need for extra bells and whistles, in which case, it is a good deal if you are free to switch.