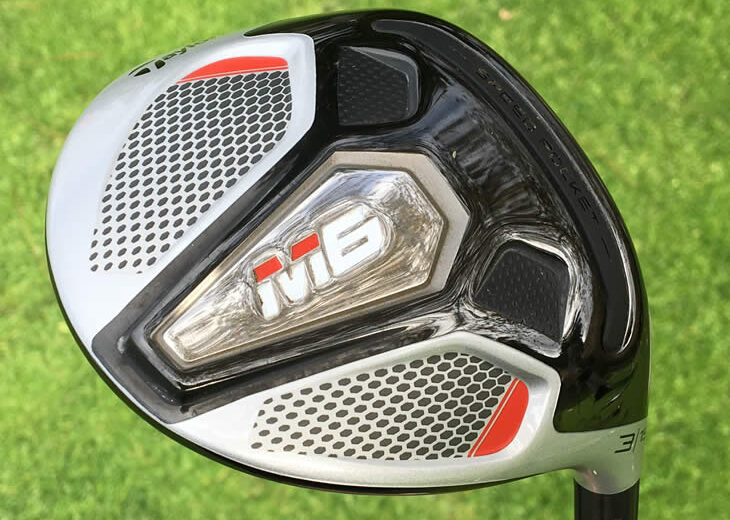 TaylorMade M6 Fairway Review – The non-adjustable fairway of the TaylorMade M family has been one of their best sellers and the M6 fairway looks set to continue this tradition.

This is the no-nonsense fairway designed for forgiveness and speed so all the usual features are there and have been enhanced a little from the previous TaylorMade M4 fairway. 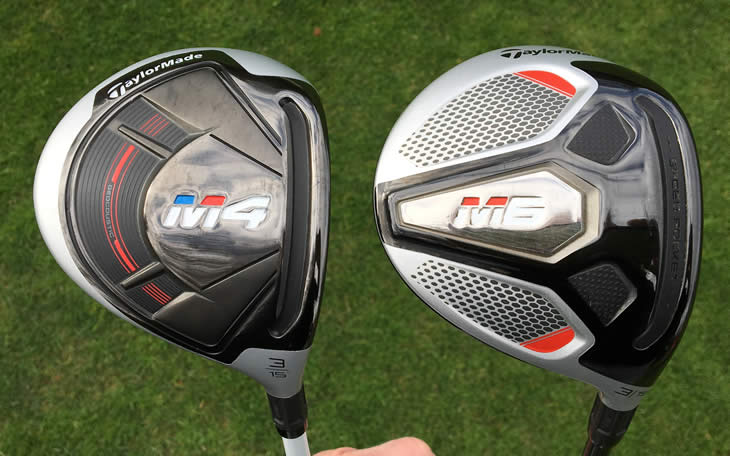 The carbon crown has been made larger to save weight so that the CG is lower and further back in order to launch it higher.

This creates a thinner silver top line at address which looks a little better against the matte finish of the carbon crown.

On the sole the Speed Pocket slot has been tweaked to provide more ball speed lower down on the face.

The Speed Pocket contains a new kind of thermoplastic polyrethane (TPU) that fills the cavity better and sits flush with the sole to prevent too much turf drag through impact.

The shape of the sole is a little more ‘smiley’ to make it more forgiving as the curve on heel and toe creates a deeper centre point is able to get under the ball more easily.

So that is all the usual areas brought up to date, but the real change is in the face which is made from a Ultra-High Strength C300 steel.

Here TaylorMade has added the Twist Face design that we first saw on the M3 and M4 drivers.

This is being introduced now because it has taken TaylorMade another year to understand the benefits of the Twist Face and then apply it to the smaller head of a fairway.

Twist Face sees the loft of the high toe impact area increase and the low heel area reduce in order to improve the initial launch direction and manage the level of spin to keep the ball straighter.

Compared to the drivers, the M6 fairway has an extra 0.5° of twisting to give 1.5° of variation from the norm, which TaylorMade say could reduce dispersion by up to 15 yards.

This is quite a bold claim and so many other factors such as shaft and contact will be involved, but in my testing it certainly did not seem worse.

Compared to the M4 fairway the performance was pretty similar and the flight seemed a little higher visually, even if the numbers do not show this.

However the sound and feel was better and I liked the slightly larger profile at address than the M4.

There is slight change in the lofts due to higher launch conditions which sees the 3HL version dropped from the line. Instead the range now goes up to a 24° 9-wood and down to a strong 14° Rocket 3.

If you struggle with fading the ball there is now also a D-Type version in 15°, 18° and 21° that has extra draw bias to get you back on track.

There is a lot to like about the M6 fairway, from the sleeker looks to the better turf interaction and the larger address profile.

It is clever what TaylorMade has done with the face and the variation in the wild shots was probably a little less, which is good for a club that you want a degree of accuracy from, especially if you are using it to hit in to the green.

For a fixed hosel, non-adjustable fairway I would say that the M6 is towards the pricey end of things, but the tech is really in the set up of the head and the carbon crown that combine to get the CG in the right position.

The slightly lower spin profile probably makes it more of an option for above average swing speed players, so if you get the right shaft in then it will be a versatile club from the tee and the fairway.

If you have an M4 fairway and you are happy with it, then you may not need to upgrade just yet for performance. On balance I do prefer it and if you are in the market for a new fairway then the TaylorMade M6 fairway should definitely be on your shortlist.