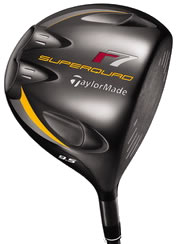 TaylorMade r7 SuperQuad Driver Review – The R7 SuperQuad driver is TaylorMade’s moveable weight driver with 4 weight plugs at 460cc. Previously they only had 4 weights at 420cc or the R5 Dual TP with 2 weights at 460cc, so this is the maximum they can do and it certainly slots very well into their range.

We liked the all black head finish which gave it sinister look, although some may not like the face and crown being the same colour for alignment.

Performance wise it was very good and moving the weights around did affect the trajectory. The TaylorMade SuperQuad has a bigger difference between the weights (12 and 1 gram) so the trajectory changes are more obvious than with the R7 Quad.

The shaft in the standard SuperQuad model is OK, but if you have the cash then go for the TP version, which also has a more square alignment then this slightly closed version.

As well as questioning its value for money, we have to mark it down for the noise at impact. It seems to be a trend now, but the crash sound at impact doesn’t do it for us, especially when other TaylorMade drivers give a much better sound and feel.