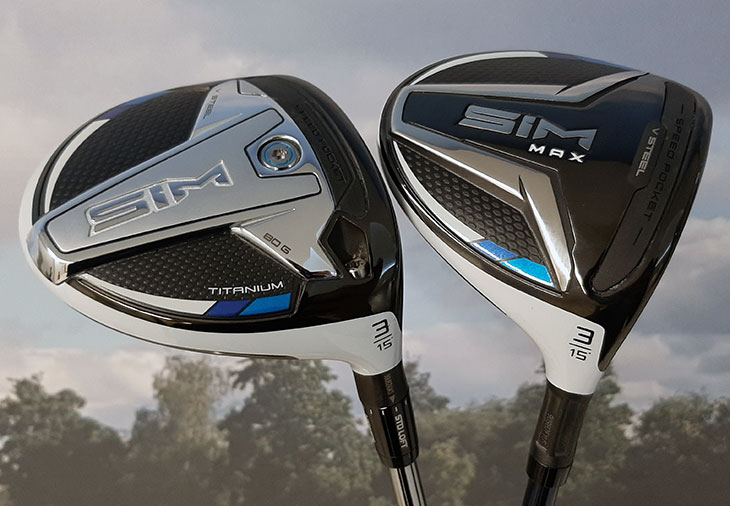 TaylorMade SIM and SIM Max Fairway – TaylorMade has introduced the SIM range for 2020 to replace the existing ‘M range’ which TaylorMade fans and tour pros alike have grown to know and love. SIM places a greater emphasis on clubhead shaping in order to increase speed for more distance.

Having already been pretty impressed with the new SIM drivers, I was looking forward to getting my hands on the fairway woods, which are also bringing back something of an old favourite for TaylorMade…

For the new SIM Fairway Woods, TaylorMade has reincarnated their classic V Steel Sole Design to help aid with better turf interaction and versatility. This V-shaped steel plate is said to reduce friction, giving the golfer a bit more confidence regardless of the lie. This is a huge change in sole design from last year’s M5 fairway wood. 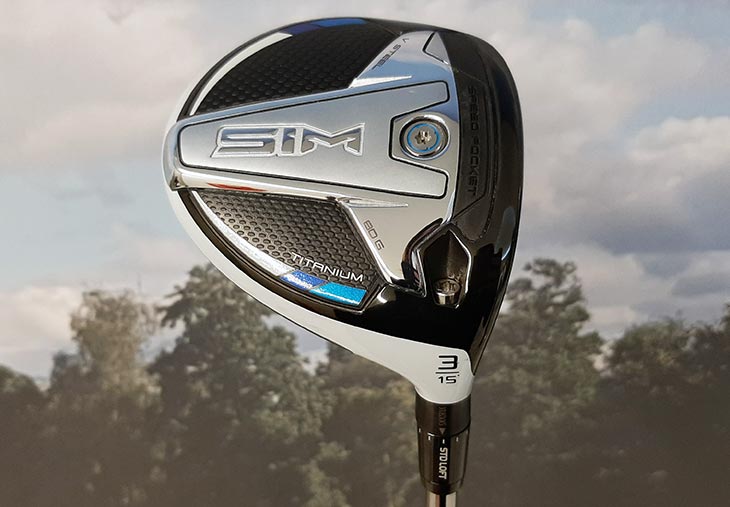 If you struggle with hitting your woods from the deck, then these could be the clubs for you.

This is joined by arguably one of TaylorMade’s greatest tech innovations in the Twist Face, which utilises ‘corrective face angles’ to help straighten ball flights on off-centre hits.

The two heads also feature a Speed Pocket behind the face, which promotes more sole flexibility and in this range is specifically designed to help with ball speed and forgiveness on strikes which are lower in the face – a common issue for many golfers using fairway woods.

In the SIM Fairway, the 180cc head has weight positioned to produce an ultra-low centre of gravity, helping to generate more distance with a high launch and a little lower spin.

A ZATECH Titanium face specially designed for TaylorMade in Japan is both strong and flexible, creating a ‘hotter’ face to try and boost ball speeds and helping out on the below-centre strikes. This should give golfers that little bit extra on the longer on those dreaded long par 5s…

Finally, there’s a Loft Sleeve which allows for 2 degrees of adjustability, allowing a golfer to optimise the club for their own preferred ball flight.

The amount of technology packed into this head is more than some drivers! The strong, penetrating ball flight and adjustability options are more suited towards golfers who tend to use plenty of fairway woods from the tee, and may also come in useful for those who struggle with driver and want another ‘fairway-finding’ option. TaylorMade staffer Jon Rahm, for example, is known to go to his 3 Wood when he needs to hit a draw off the tee.

Due to the adjustability of this head I would suggest that you need to be a player who really knows their game well, and knows their swing and ball flight patterns, so that you resist the urge to start tinkering and make things worse for yourself.

With an RRP of £369 this club is at the very premium end of the fairway wood market, so if you are going to stump up the cash then make sure that 3 Wood is a club you use often to get your money’s worth!

I can imagine the Max Fairway catering for the vast majority of golfers. As the name suggests, it provides maximum distance and forgiveness with an easier launch and higher trajectory than the standard SIM.

This means that it should give a bit more confidence to those golfers who aren’t overly confident hitting fairway woods, particularly without a tee.

The price cheaper is too at £269, because head isn’t manufactured with Titanium like the standard model. The fact there is no adjustable hosel also means that this is very much a ‘grip it and rip it’ type of club. Who doesn’t like the sound of that?

For many golfers V Steel will trigger memories of an iconic product we released more than a decade ago. As we reviewed the research used to develop the original technology, we discovered a massive benefit to having a fairway metal with significantly less turf drag through impact.

I compared the new SIM and SIM Max directly against my own 3 wood, with the same style shaft and length. I wanted to see whether TaylorMade’s claims on club head and ball speed really did come to fruition, whilst also testing the new V-Steel Sole from a variety of different lies out on the course.

I firstly took it out for a spin outside at Prestbury Golf Club to give these fairway woods their first hit and then went back into the warmth of The Range in Manchester using Foresight technology.

First things first I have to talk about the looks. The clubs are very sexy-looking, with the blue, grey and chalk replicating the SIM Drivers and the rest of the range. If this club was on a dating site, I’d definitely swipe right! It’s stunning.

I also felt they looked powerful, whilst the shallow face and deeper head shape gives you more confidence to hit it well from the deck.

There was a definite difference in sound and between the SIM and SIM Max, presumably due the titanium construction in the SIM as opposed to the C300 Steel in the Max. The SIM produces a real ‘thump’ rather than a ‘ting’ which I really liked, as it gives the impression that you’ve struck the ball really solidly and reminds me of that ‘better player’ noise.

Even though it was just 3 degrees on the day of testing the SIM Fairway in particular felt hot coming off the face. I also noticed that this was maintained even when you don’t catch one quite out of the middle, which was reassuring.

When gathering data indoors I really started to notice the difference in consistency between the SIM and SIM Max during an extended session hitting balls.

My dispersion was far better with the SIM Max as I was tending to turn the SIM too far to the left, and whilst the distances produced were good I was struggling to control it due to the lower spin rates.

With the SIM Max however there were a number of times where, after hitting the ball, I looked up expecting to see the ball missing left too but I was surprised to see it was holding its line much better.

In terms of distance, the SIM and SIM Max were all pretty similar to my own 3 wood and so were producing the kind of numbers that I would be expecting to see. It was also pretty impressive that I actually gained a little yardage with both clubs when hitting from the deck, perhaps suggesting that the V-Steel Sole was doing the business.

The SIM Fairway was travelling a little further in the air than the Max, but I think most golfers would agree that it is worth giving up 4 or 5 yards to be sure of hitting more accurate shots!

TaylorMade have named this range ‘Speed In Motion’ because they claim that the design of the head is going to increase speed. So did it work?

Well, not entirely. My existing 3 Wood was actually producing a little more ball speed, at 127mph, whilst the club head speed was pretty much identical. Still impressive numbers but perhaps not the game-changer that was being suggested.

I could totally understand that the price of this club may put some people off, especially if, like me, you use driver at every opportunity and so the 3 Wood becomes a little redundant from the tee.

I don’t feel the extra £100 is reflected in the performance either, as it just doesn’t go further enough than the SIM Max to make it justifiable.

The adjustability might be worth charging more for as it makes it easier to change shaft, lofts and lie if you like tinkering. However if you get properly fitted I don’t know many people that feel the need to change these settings anyway.

At £100 cheaper than the SIM, it proved to be better value as long as you are custom fitted as the fixed hosel means that once you have chosen your shaft and loft, this cannot be changed.

In short, it’s a very good looking 3 wood which performs well off the tee and ground and does go that little bit higher. I think I’d choose to game this club above the SIM due to its accuracy, and the loss of distance was not exactly drastic which in my mind makes it the better option.

Which Would I Use?

If I was back playing full-time on the LET, I feel that I could handle the SIM as my consistency of centre strikes and club face control would be better.

But for this point in my career the SIM Max is providing me the help which I need, and I think this is something which most amateur golfers should be considering. These clubs shouldn’t just be picked on which goes furthest on a good hit, but rather on which provides more consistent results for you.