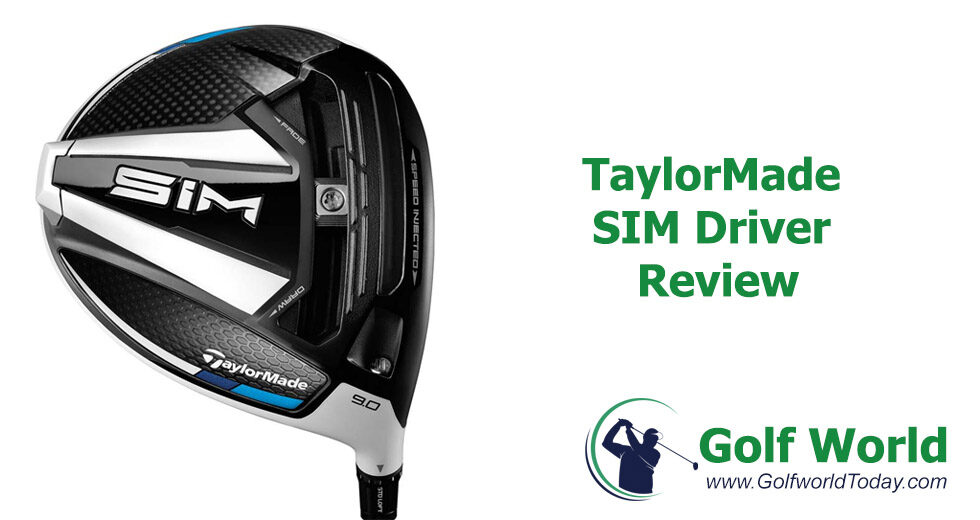 TaylorMade SIM Driver Review – TaylorMade drivers have become very popular amongst the world’s best players in recent years. Huge success at the hands of their big money signings like Tiger, Rory and Rahm have also given their drivers some serious tour validation, earning them probably more respect within the golf industry than ever before.Fast forward to 2020, and we find out what the outcome of all this success is – TaylorMade SIM, which stands for ‘Shape in Motion’. 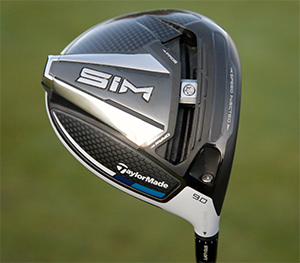 Like many of us, you may have assumed that TaylorMade would progress naturally onto M7 and M8 models, but they have changed their whole collection after 4 years of hard work since the unveiling of the M1 driver.

The reason for this is TaylorMade thinks club head technology is reaching its maximum in terms of generating more ball speed in line with legal limits, so in order to provide golfers with a club that can allow them to make further improvements without changing the head, they have focused their research on making the head shape more aerodynamic.

You only have to look at cycling to see how the design of bikes has evolved in order to maximise the speed a cyclist can generate. With SIM, TaylorMade suggests the club head needs to also go under a similar kind of redesign in order to for the golfers to generate more speed. With their new shaped head they can move the weight further back and claim to increase club head speed due to less drag.

Introducing TaylorMade’s latest innovation – the Inertia Generator. This is a new revolutionary asymmetric sole shape to reduce drag at the most critical part of the swing and improve aerodynamics for more club head speed. The new redesigned Inertia Generator places weight at the extreme low-and-back portion of the club head for enhanced forgiveness. We’ve seen this kind of technology before in the drivers like the Cobra F9 Speedback, however the interesting thing here is not what it is, but where it is…

TaylorMade’s Inertia Generator looks a little different to similar technologies we have seen in the past however. It sits at a 20 degree angle on the sole of the head. This idea was conceived in order to reduce drag on a players down swing as it is said to match the arc in a golfers swing based on where the club head is positioned during the final third of the golf swing.

After that, a lot of technology from the last iteration in the M family remains. Twist face, Speed Injection, Speed Pocket and Inverted Cone Technology all feature in the new SIM driver heads. These technologies have proven to be very successful and the fact that TaylorMade have stuck with them even under a new brand name shows just how much they believe in them. Now it’s all about focusing on aerodynamics rather than ball speed and forgiveness.

There are three new driver models in the 2020 SIM family, so here’s a quick rundown as to what each one is all about:

The SIM driver is aimed at the better player (this is the model you’ll see in TaylorMade staffers bags). The SIM Max D is for the higher handicapper and the SIM Max will probably fit the bill for most golfers. After first seeing the three models, I was keen to see if this was the case or if there was room for a cross over.

“We reshaped the driver, so you can reshape your game.”

I’m hoping to find that the SIM’s new shape head does increase my average club head speed whilst still being as forgiving as ever. I also want to find out which driver would be suited to me and you.

To do so, I first ventured out on to the course at Prestbury Golf Club to compare the clubs and try them in different scenarios. I then headed inside to The Range in Manchester to learn my exact numbers and compare the drivers with Foresight Technology. TaylorMade very kindly sent me the correct flex and shaft length in the two stock shafts the SiM is available in: Mitsubishi Diamana S Limited 60 and Project X’s HZRDUS Smoke Green 70 to try these drivers.

These drivers look beautiful. You can tell there hasn’t been a stone left unturned in order to make everything just right visually. In terms of the colours, out goes the red and in comes the blue. They have also gone with grey and chalk white finish on the crown of the head instead of black and white.

The crown does have a lot going on, with the usual framing on the face for alignment which I really like. There is also a web design on the crown and SIM written by the hosel. Apart from the slight colour-scheme tweak, it’s all very much similar to the M drivers of the past, until you look underneath the club…

Now for the technology impacting the shape and what TaylorMade have worked so hard on. The bottom of the club looks like a capital T with the Inertia Generator bulking out the back of the head with space cut out either side of the T. You can really see the difference when looking behind somebody as they address the ball.

Surprisingly, the SIM head looks small but that’s because the height of the face is much shallower compared to the M5 or M6 models. The whole head seems a lot shallower and therefore looks flatter, however the face height increases throughout the range.

The SIM also has sliding weight technology, where the other two drivers have not. This will explain why the cost of the the SIM is £479 and the other two come in with a RRP of £449.

The SIM Max D model has divergent top-line masking, which makes the driver look more open at address than it actually is, helping golfers close the face at impact.

TaylorMade have really made the modern-day ‘new manufacturers noise’ their own. I would even go as far as to call it ‘the TaylorMade sound’. It’s even more solid than before – dull like a whack, rather than a high pitched ping sound. I enjoyed the SIM’s sound and feel off the face a lot.

Maybe this is the twist face helping also as I had a few shots that I expected to go more right or left but this didn’t happen. For me the sound and feel from this driver gives you confidence off the tee. You feel good over the ball and I found myself looking forward to each tee shot with the SIM driver in the bag.

The SIM driver is the lowest spinning driver I have ever hit. My numbers ranged from 1748 rpm to max of 2536 rpm, which for a driver, is very low.

Forgiveness wise on the course it was very consistent, I did notice a wider dispersion left and right inside either. Distance wise it was above my average in the cold, the flatter ball flight of 28 yards peak (mine and LPGA average is 31) helped with the roll once hitting the wet ground, which as you can imagine in warmer and firmer conditions will help even more.

I didn’t notice an increase in club head speed due to the new aerodynamic shape however. Foresight data showed I had a 93 mph (LPGA average is 94 mph) which is the same as with my current driver on this particular day of testing.

The SIM MAX driver – this was a little more ‘spinny’ than the SIM but still produced excellent rpm numbers. I averaged 2522 rpm which I was delighted with, especially for a driver offering this much launch and forgiveness. My distance was 2 yards shorter on average than the with SIM but my launch and peak height was a few yards up also.

I also felt I could hit the ball left easier than when using the SIM which is the shot I prefer off the tee. My dispersion was better due to this than the SIM. Again, these findings prove that this the SIM Max model is higher launching and more forgiving.

SIM – first shot, no warm up and 3 degrees. It sailed straight down the middle with a baby fade. Happy days. The next 3 tee shots were carbon copies, all finishing within a 4 yard radius. The ball flight was penetrating with low spin and went a nice 230 yardages in very cold conditions (about 4 degrees to be exact).

The ball seemed to run out even on wet ground too. This driver showed consistency in accuracy and distance. They were all little fades without trying, when I wanted a draw I struggled more. However, that’s where the benefits of the sliding weights come in. You could always change the settings before a round.

A slight negative with this head is the adjustable weight getting grass and mud caught inside. Minor point yes, but this is something that really annoys me and will do other golfers too as it’s so hard to clean!

Having already taken a fancy to the SIM, I was interested to see if SIM Max would change my mind. This club to the naked eye flew higher, the spin looked more and it was easier to hit a draw. The more I hit this the more I thought that the flight of the SIM was too low. The SIM Max really is a great driver that had everything that was good about the SIM, just with that slightly high flight.

Everyone knows driver off the deck is my new shot in the bag, and with the inertia generator providing some serious bulk at the back of the club, I was interested to see if this helped or hindered my go to shot on long par 5’s. The ball performance was ok but you could definitely feel the head travel through the impact zone differently. I felt it affected the performance and I was uncomfortable trying this shot. So if you’re a golfer that really likes to hit driver off the deck – there could be some issues here.

Before I started this review I would have said the SIM would be the model for me but, dare I say it, it did do what it said too well. The spin sometimes dropped too much for my lower swing speed.

However where the SIM Max really impressed me was when I didn’t catch one true. I never got a high spinning shot (over 3000 rpm) and so my distance never dropped.

I never expected the middle driver of this range to perform so well without having to alter settings to lower spin. The Inertia Generator at the back certainly added to the flight of the ball without effecting spin.

However, it was extremely difficult to really notice an increase in swing speed due to the shape of the head and the angle at which the Inertia Generator is placed. I’m still unconvinced with 20 degree angle of the inertia generator. Yes, it may be proven in a TaylorMade lab or when DJ is swinging the club “in the slot”, but let’s be honest not everybody swings it perfectly every time so whether we’re all going to get the benefits it promises I’ll leave up to you.

Absolutely I would. I’d put the SIM Max driver in my bag tomorrow, it’s gorgeous looks are matched with its forgiveness and distance and this is all backed up by the numbers.

It will suit most golfers in my eyes and throughout the full SIM driver range TaylorMade have produced an impressive outfit of models that I predict to do well both on tour and on the amateur market in 2020.