TaylorMade SIM2 Driver Review – TaylorMade’s SIM Drivers were the most seen and the most talked about of 2020 – last summer it was harder to get your hands on one than it was to get a tee time at your local golf club (especially if you live in the UK!) 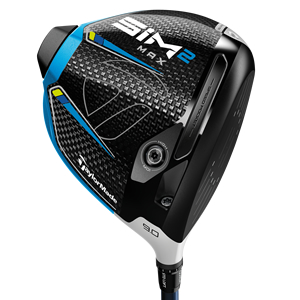 With its recognisable two-tone crown and head-turning inertia generator on the sole, as well as the fact it was in the hands of the likes of DJ, Tiger, Rory and Jon Rahm every week on the PGA Tour, it became the must-have driver in both the professional and amateur game.

At one point in 2020, TaylorMade sold more SIM drivers in a six week stretch than M5 or M6 drivers in six months of the previous year, and so unsurprisingly it was the number one selling metal wood in the UK last year.

So where do they go next? Well the new SIM2 range has arrived, but can it improve on the SIM? To try and do so, TaylorMade has stripped the head down and tried to improve each piece individually like an F1 team would do on their car…

TaylorMade have pointed towards four ‘crucial elements’ of the construction of the new SIM2 Drivers which they say allows them to be fast, forgiving and powerful.

The first of these is the all-new forged ring construction, using a lightweight and high strength aluminium that is precision milled and is there to unite the other bits of technology for improved MOI and optimal CG placement. The result? A much more stable club head providing more forgiveness.

Secondly, the SIM2 now features a full carbon crown and sole which saves plenty of extra weight, that has been redistributed onto the inertia generator low and back in the head, helping to shift the CG and improve forgiveness.

The carbon on the sole has also been designed to add more durability so that it doesn’t get damaged by turf interaction and high speed contact, whilst the black satin and chalk colourway on the crown aid alignment at address.

The Milled Back Face Cup is the only part of the driver head that is crafted from titanium, and this encourages better energy transfer to improve ball speeds. Behind the face there is internal CNC milling which varies the thickness of the face at certain points, allowing for more consistent results on different strikes.

This, along with the data used to develop Twist Face technology, produces more of an oval shape that stretches from the high toe to the low heel so that you get more from your mishits.

Speaking of Twist Face, this technology still remains in the SIM2 drivers although the Speed Injection ports (the blue dots) have been modified to just one port located on the outer toe which TaylorMade says can ‘manipulate speed across the face’.

The Thru-Slot Speed Pocket also remains from last year’s SIM models, and works to improve ball speed and performance on those shots which are struck low on the face.

TaylorMade say that focusing on marginal gains will make their ‘shape in motion’ drivers better, I’m just hoping that the sequel is more like The Godfather 2 and not Jaws 2!

In terms of head options, these are largely the same as last years SIM, there’s three different models:

SIM2 Driver – The lower spinning, lower launching head used by DJ, Rory, Rahm and Charley Hull. It’s said to be 200/300 rpm lower spinning that the Max and with a larger face than last year’s model. Available in 8, 9 and 10.5 degrees.

SIM2 Max Driver – Features a 24 gram weight compared to the SIM’s 18 gram to increase MOI and forgiveness,. The face is also larger than the SIM2 and it encourages a slightly higher launch with a little more spin. Available in 9, 10.5 and 12 degrees.

The SIM2 Max and SIM2 Max D are also available for women, with the heads being the same but shafts are shorter and with more lightweight options available.

I visited LSH Auto’s Mercedes Benz, Stockport to trial the SIM2 and SIM2 Max on the Trackman 4 with Titleist Pro V1x balls, before heading out to Prestbury Golf Club for on-course testing and my verdict. Could TaylorMade improve on the impressive SIM models from 2020?

You can watch my full review via the Golfalot YouTube channel here:

The SIM2 Drivers show a darker colour with an extra splash of blue and yellow added to the clubhead, though the pattern on the crown stays largely the same, as does the chalk line around the face and at the join of the crown.

On the sole, the Inertia Generator seems to protrude less this year whilst the TaylorMade logo has replaced the SIM logo, and the SIM2 logo now sits closer to the sole.

You can clearly see the new forged ring as it is an eye-catching electric blue. It will be easily spotted on your TV screens when the golf is on, which I am sure TaylorMade will love.

There is no weight track on the sole of the SIM2 like the SIM, but the weight sits closer to the middle of the face and moves closer to the heel as you move from Max to Max D to help with the left biased.

All in all, TaylorMade have taken the feedback from golfers from last year and cleaned things up to make this driver look less gimmicky, and more high end.

In terms of feel, both the SIM2 and SIM2 Max are very similar to last year’s SIM, although I think the SIM2 felt a little more playable than its predecessor as that could be hard work to get going.

These clubs ‘feel’ like a TaylorMade should, and produce a solid thud both in sound and feel off the face, with the SIM2 Max providing a little more stability and forgiveness on poorer strikes.

I know what you are thinking: “TaylorMade only released the SIM a year ago, the new drivers won’t be any better…” To be honest, I thought the same, especially when I was the testing the SIM2 against the SIM Max, which was my favourite driver of 2020.

The Trackman data shows that there was a small gain in both models in terms of both ball speed and carry distance in comparison to the SIM Max, which to start with is impressive.

Last year’s SIM was incredibly low spinning, and I struggled with getting enough flight from it with shots often dipping below 2000rpm. This is great if you are Dustin Johnson, but it wasn’t ideal for someone like me with a ‘normal’ swing speed.

During my indoor testing I didn’t see much variation between the spin of the SIM2 and SIM2 Max but launch and height was down with the SIM2.

So with a 4 yard difference in carry average between 2020 and 2021 model there was enough there to keep me interested. Now to take them outside…

Out on the course, things became much clearer between the SIM2 and SIM2 Max. Looks-wise they are almost identical, but there was a definite difference in performance.

The SIM2 tended to favour the right-hand side of the course with a lower ball flight, although the flight was a little inconsistent depending on the strike. I was able to get a bit more distance with the SIM2 Max and this was particularly clear when hitting uphill as the SIM2 just didn’t stay in the air for long enough.

The bad shot with the SIM2 was the low one which leaked out to the right, and I was giving up almost 30 yards on a bad strike in this case. Ok, if you strike it well from a raised tee box and get the right spin rate then it may fly further than the Max but I’d say that’s more of a perfect storm scenario rather than everyday performance.

By comparison, the SIM2 Max Driver produced a dependable draw pretty much every time for me out on the course. Compared to last year’s SIM Max it was also an improvement by around 5 yards.

What truly sold me was that I hit four tee shots in a row for use on our video review as extra footage, without fully concentrating on the actual outcome, but when I got down to the fairway all four were within a 3×3 square. Happy days.

I think these drivers will be the best selling of 2021. TaylorMade go big on marketing and all of their tour professionals will have SIM2 or SIM2 Max in the bag. The new blue ring will be easily seen and identified on the television and I know that plenty of golfers will want to play the same driver as Rory or DJ.

If you didn’t manage to get your hands on a SIM then I would definitely recommend the SIM2, as they are the same price as last year’s (£449 RRP), they look better and they perform a little better too. I really didn’t think that I’d see much of a distance increase but there was.

Will we see Tiger Woods switch out of the SIM into a SIM2 driver when he makes his first appearance of 2021? I have a feeling we will…

There is nothing wrong with the SIM Drivers but I think that SIM2 is slightly better, and if you are currently gaming something like the M2 or perhaps something older, then you should definitely see some better numbers coming out if you’re to get custom fitted.

The SIM2 is suited to the players who have a higher swing speed and are wanting low spin and low launch. The SIM2 Max is more of an all-rounder which will suit the majority of golfers from elite to mid-handicappers, with a slightly higher launching, mid spin, more forgiving driver.

Finally, the SIM2 Max D is a draw-biased player for golfers who struggle with a slice and want ultimate forgiveness with the largest face in the line-up.

When testing inside I thought the SIM2 might have a chance as the low spin is something that I am always looking for, but when it came to outside testing, then I just didn’t have the speed to make the most of the head.

So I’d choose the SIM2 Max, as SIM Max was my favourite driver of last year until the Titleist made a late charge. TSi, you have some serious competition…