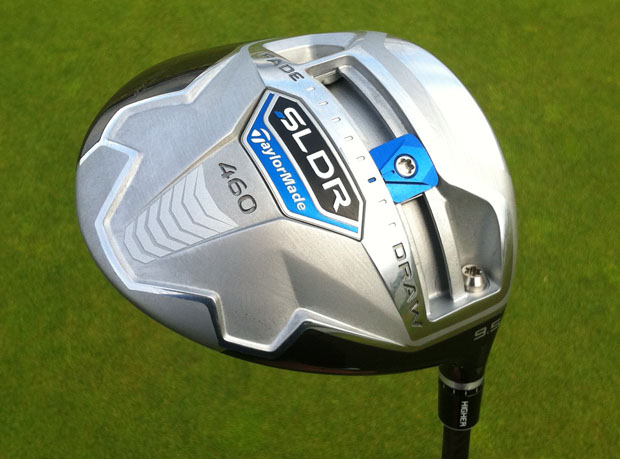 We liked the R1 and thought it was one of the better adjustable TaylorMade drivers, but for most of the golfing population the additional fitting elements made it fractionally too heavy to get going. 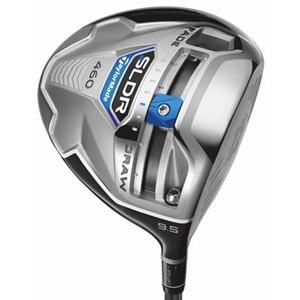 Now with the SLDR driver, the moveable weights in the heel and toe and the dial on the sole have been replaced with a single sliding weight in the 460cc titanium head.

This reduces the weight of the SLDR driver and makes it lighter so that in theory you get more clubhead speed from the same amount of effort. They have also moved the centre of gravity (CG) closer to the face which also increases ball speed, although this can also increase dispersion and reduce accuracy.

TaylorMade are promoting the SLDR driver with the line of ‘more distance through more loft’ as the head creates much less backspin than other models. This allows you to play a driver with a higher loft, which in turn makes it more forgiving and easier to hit and this is really the key benefit of this driver. The higher launch with less spin should give you more distance and the extra loft will keep it online.

I went to my local TaylorMade Performance Centre at Kingsfield Golf Centre, Linlithgow to test this theory out against my current driver and the results are below.

As you can see from the Trackman results above with the same Vertical Launch angle and Smash Factor (energy transfer) I was able to increase ball speed by 3mph, but the biggest difference was the 26% decrease in ball spin. The key thing is that I was able to achieve this with a 10.5° driver compared to my current 9.5° driver, which should be the other way around as usually more loft gives more spin rather than less.

Although it is showing a gain of only 3 yards in total distance, the average distance shown with the SLDR hides a couple of 280 yard shots so the theory does work in practice.

Using a 9.5° driver adjusted up a degree to 10.5° slightly closes the face to make it more forgiving than the 9.5° or even the standard 10.5° model for me. Weird, but it works as the dispersion view of the trackman backed this up with a much tighter pattern for these shots too.

What I should also add is that the benefit of going to a TaylorMade Performance Centre is that I could try a wide range of shafts to get the best results. The stock shaft is a very light Fujikura Speeder 57 that is much better than previous standard TaylorMade shafts and suited me better than the overpriced, heavier stock TaylorMade TP (Tour Preferred) shaft, which is a first.

The stock shaft also gave better results than my current model, but the best results for me came from a Aldila RIP Beta 60, which was reassuring as my current shaft is an Aldila RIP Alpha 70. However what this shows is that sometimes as well as improvements in the head, it has to work with the shaft. The shaft is the engine of the club and with technology improving all the time, new shaft types can also result in greater distance gains.

Now bear in mind that changing the loft will also affect the lie of the club slightly and there is nothing to adjust the lie on this club, unlike others in the market. However this is where the sliding 20 gram weight comes in.

If the shape of the shot needs tweaking to compensate for the lie change or because you just have a fade or a draw then the blue weight can be unscrewed and moved along a track of 21 possible positions across the 7 marks shown on the weight track. (You can see this in action in our video review below.)

This moves the CG horizontally across a range of 6mm, up from 4mm in the R1, so it should be able to cope with whatever type of swing you put on it. Like all adjustable features they should be viewed as a one-time personal custom fit like pro’s get on a tour van rather than tweaked on a regular basis.

There are some big changes visually as for the first time in over 3 years since the R9 SuperTri 11 driver that TaylorMade have introduced a black headed driver. After the whiteout with the last 4 generations of driver, fashion or more likely tour player and market pressure has seen a return to a more modest colour set for the driver.

One of the benefits over the white driver was the alignment aid it created between the white crown and white face. On the SLDR driver, TaylorMade have reversed this and you have a charcoal grey crown and a silver face giving you the same effect, even if it is not quite as pronounced.

Rather than a matt finish, the crown has quite a shiny polished finish with a chrome accent on the rear. The crown looks good even if it reflects the sky or whatever else is above it.

It does look very clean and classy at address and the only colour is the flash of blue on the moveable weight on the sole, which is rather muted by TaylorMade’s recent standards. I was expecting something of a brighter tone whatever the colour was, but as seen on the TaylorMade SpeedBlade irons this shade of blue is the colour of choice for now. Blue has never been a massive hit on clubs until recently with the Cobra AMP Cell driver, so it will be interesting to see if TaylorMade can make it work.

When I hit it the solid feel was as good as the best TaylorMade drivers of the past. Like previous TaylorMade drivers, it also announces your presence quite effectively with a loud, but not overbearing, impact sound. The sound is still not as good as some of the best drivers in the market, so that is the only thing going against it, but that is a personal thing.

Overall TaylorMade have created a driver that has a fast, low spinning face and for this reason it is a step up on previous models. This allows you to play with more loft for the same trajectory and that can only be a good thing for most, if not all golfers.

The moveable weight is a useful feature, although if you get the right shaft and loft then the need for it may not be that great unless you create some real bananas off the tee. Certainly it is more relevant and possibly simpler than what has gone on before on the sole of TaylorMade drivers.

The looks may please more golfers and certainly tour players who want to use a TaylorMade driver, but are sponsored by another brand elsewhere in their bags. However this is about mass market appeal and from that perspective the more conservative approach should entice more golfers to give the SLDR driver a go and we think they definitely should.