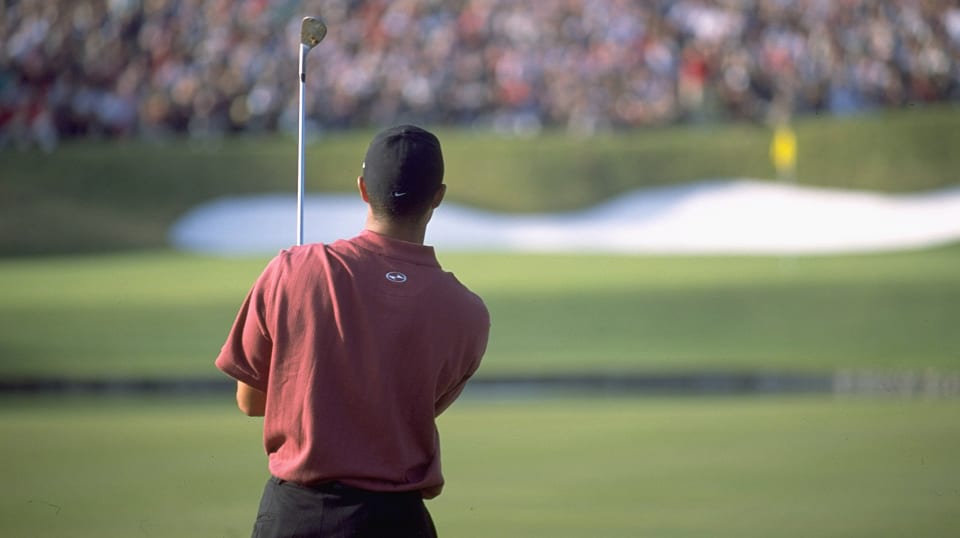 Woods’ performance in the 2000 U.S. Open is the most dominant in the game’s history, and his iron play was a huge part of it. We’ll get to that tournament in a moment, but first we’ll look at his best approach performance in the ShotLink era: the 2006 THE NORTHERN TRUST at TPC Boston. That week, Woods racked up a staggering 14.6 Strokes Gained: Approach, six strokes more than anyone else in the field (Robert Karlsson was second, at 8.31). It’s the most Strokes Gained: Approach for Woods in any single event in his career. The 2006 season saw Woods reach iron play levels not seen by anyone since: he averaged a TOUR-best 2.07 Strokes Gained: Approach per round, the best single-season mark in ShotLink history.

Non-ShotLink division: 2000 U.S. Open: During a week in which the field hit less than 50% of the greens in regulation (48.4%), Woods hit 70.8% for the tournament. His 51 greens hit in regulation were seven more than anyone else (Fred Couples and David Toms each hit 44) and translated to a field-best 21 birdies. Arguably the most dominating performance in pro sports history, Woods’ 2000 U.S. Open victory is nearly impossible to top from a ball-striking perspective.

At Bay Hill in 2009, Woods lost strokes to the field on his drives and approach shots (-0.43 for the tournament), yet still got to shake Mr. Palmer’s hand and lift the trophy that Sunday afternoon. He did it through sensational short-game play, getting up and down for par 24 times, his most across 79 stroke-play victories on TOUR. Woods led the field for the week in Strokes Gained: Around-The-Green, at 1.69 per round.

Non-ShotLink division: 1999 Walt Disney World Classic: Honorable mention here goes to another Orlando-area win 10 years prior, at the 1999 Disney Classic. That week, Woods was a perfect 13-for-13 scrambling and claimed a one-shot victory despite seven three-putts. In the last 35 years, it’s one of just four instances where a player had a perfect scrambling percentage for 72 holes (with ten or more attempts) and went on to win the tournament.

Woods’ legacy of clutch putts makes this category maybe the most difficult to lock down. From ‘Better Than Most’ at the 2001 PLAYERS to ‘Expect Anything Different’ at the 2008 U.S. Open (both victories, by the way), memories of big moments abound from Woods’ halcyon days.

The most complete putting performance, statistically speaking, might have come at Bay Hill in 2013. Woods had 11.2 Strokes Gained: Putting for the week, by far his most in a win since ShotLink tracking began in 2004. He led the field in approach putt performance (a stat that measures lag putting ability) and made nearly 100 feet of putts per round. Woods’ 14 putts made outside 10 feet that week are tied for his second-most in any single PGA TOUR event.

While one triumph at Pebble Beach in 2000 has already been mentioned, what Woods did earlier that year at that same site was awe-inspiring, as well. At the 2000 AT&TPebble Beach Pro-Am, Woods trailed by seven strokes with nine holes to play. After a hole-out for eagle at 15, Woods birdied two of the last three to card a bogey-free 64 and win by two strokes.

The previous year at Torrey Pines, Woods was tied for 36th place entering the third round, nine shots behind leader Ted Tryba. Woods shot 62-65 on the weekend to win by two strokes. It marks the only time in Woods’ career he has won when outside the top 25 through 36 holes.