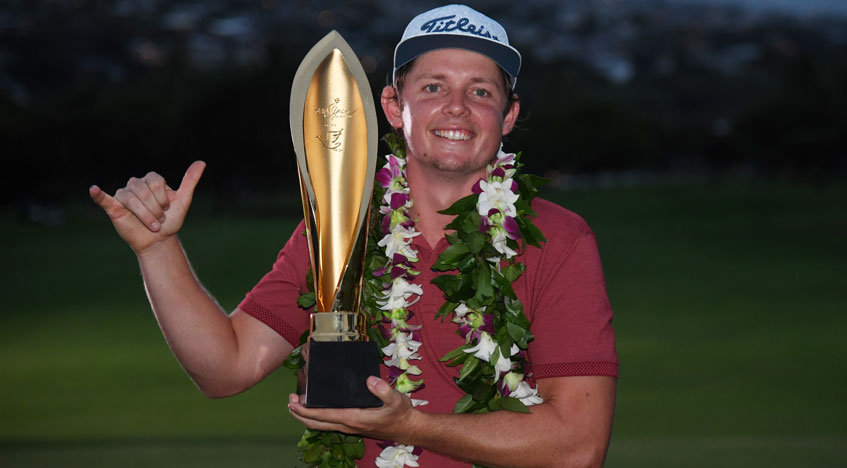 Cameron Smith returns to defend last season’s Sony Open in Hawaii victory, while past THE PLAYERS champion Webb Simpson and 10 of the top-25 golfers in the world tee it up at Waialae Country Club.

In its longtime spot on the schedule, the Sony Open marks the first full-field event of the calendar year.

FIELD NOTES: Collin Morikawa looks to build off his two victories in 2020, including his first major championship, with his second Hawaii start in a row. Morikawa finished T21 at least year’s Sony Open after holding the first-round lead… Thirty-two of the 42 golfers who teed it up at the Sentry Tournament of Champions will make the jump over to the Sony Open and complete in both events of the Hawaii swing… Sponsor exemptions include major winners Y.E. Yang and Mike Weir, along with Ryo Ishikawa and Takumi Kanaya, who turned pro last year after reaching No. 1 in the world amateur rankings. Kanaya recently won on the Japan Tour and is already ranked 120th in the world… Five of the top 10 golfers in the FedExCup standings (as of the weekend at the Sentry Tournament of Champions) will be teeing it up at the Sony Open, the highest-ranked being Viktor Hovland at No. 3… Simpson was just one shot out of a playoff between Smith and Brendan Steele a year ago. Steele, who started Sunday with a three-shot lead, returns to try to earn the title that eluded him, while Simpson is on the hunt for his eighth PGA TOUR title.

STORYLINES: University of San Diego golfer and former Hawaii state champion Evan Kawai will make his PGA TOUR debut this week after winning a qualifier in November. His college coach is TOUR winner Chris Riley… Can Charles Howell III continue his impressive effort at Waialae? He has 13 top-25s, including 10 top-10s, in 19 starts at Waialae. That includes two runners-up and two third-place finishes… Smith’s 11-under score was the highest winning total at the Sony Open since 2012. He was 4 over par on his first two holes of the tournament… Smith is looking to become the first golfer to defend his title at the Sony Open since Jimmy Walker in 2014-15. There have been just four golfers to go back-to-back at Waialae… Morikawa has a lot of family that lives on Maui and Oahu and visited the island many times growing up. Although there will be no spectators allowed on site, he’ll have plenty of good vibes on the island.

LAST TIME: Smith defeated Steele in a playoff to capture his first PGA TOUR title as an individual (he and Jonas Blixt won the Zurich Classic of New Orleans the first year it was a team event) with a birdie on the 72nd hole and a matching birdie on the first playoff hole. Steele was 2 over for his final six holes and opened the door for Smith, who had offered to donate $500 for every birdie and $1,000 for every eagle on the week to his home country’s effort against the raging Australian bushfire crisis. On the 72nd hole, Steele misjudged his approach shot and had to take a drop, but he still nearly dropped a snaking 30-foot birdie try for the win. He missed, and couldn’t get it done in the playoff, either. Simpson finished third (missing a 14-foot birdie try on the final hole to get into the playoff) while Graeme McDowell, Ryan Palmer, and Kevin Kisner rounded out the top five.