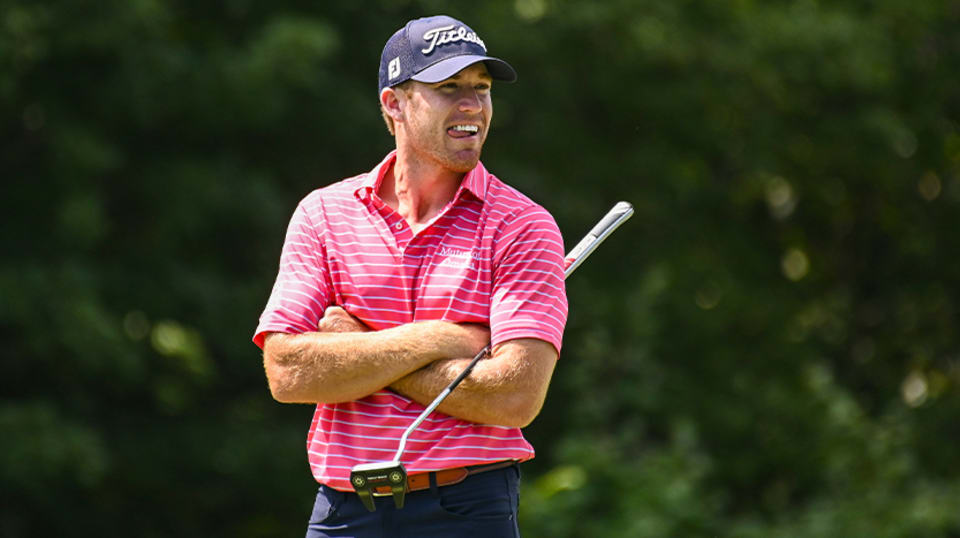 NORTON, Mass. – For 66 holes you could have been forgiven for paying very little attention to Robby Shelton at THE NORTHERN TRUST. He was a modest 7-under par and in a different time zone from the leader, Dustin Johnson.

Then, “a switch went off” and the inexplicable side of golf poured forth in all its glory.

To brush it aside by saying he played his final six holes at TPC Boston in 6-under doesn’t quite do it justice. Not when it came so shockingly and so unexpectedly and created a most favorable change in Shelton’s schedule.

As birthday gifts go (the onetime University of Alabama star will turn 25 Tuesday), the one he gave himself is a trip to Olympia Fields for next week’s BMW Championship.

“You know, that’s been my goal the whole year, to make it to the BMW,” said Shelton, whose blistering 63 – 271 finish got him into a share of 13th in his first-ever FedExCup Playoff. More importantly, it enabled Shelton, who started the week 81st in the FedExCup standings, to break into the Top 70 (he’s No. 62) and get a spot in next week’s field.

He likely will never forget the sequence of shots that got him there.

Par-4 13: His ball sitting on the fringe with a piece of mud on it, Shelton could only strike the 44-foot putt and hope. “Just got kind of lucky,” he said. “The ball found the center of the cup.”

Par-4 14: Shelton hit two brilliant shots into the 516-yard best, then drained a 13-foot putt. It was one of two birdies at the hole in Round 3.

Par-4 15: It officially got glorious when his 132-yard approach hit 5 feet beyond the hole and spun back into the cup for an eagle. “I mean, it was dead center in the cup. So, pretty cool.”

Par-3 16: Missing the green right, Shelton wedged it to 7 ½ feet and made the clutch save.

Par-4 17: From 14 feet, he made yet another crucial putt, this one for birdie. “First three days, nothing went in,” he said, shaking his head. “It was just very slow. Finally, it happened.”

Par-5 18: His second shot from 238 yards found the green and Shelton deftly two-putted from 28 feet for his seventh birdie of the round, one that he would come to treasure for it earned him a visit to a place that is special to him.

The emotions piled up and while in the aftermath of his finish he sat a whopping nine strokes being Dustin Johnson, who had not yet teed off, “It kind of felt like I was winning the golf tournament for a minute there,” he said.

He didn’t, of course, but he did win that tournament within a tournament that players challenge themselves with. “My caddie and I knew we had to get to probably Top 20, at least, to have a chance,” said Shelton, who got the update after signing his card and offered a massive exhale.

“I can breathe,” he laughed.

Coming from way back: No one came from a deeper hole to fight his way into the BMW Championship than Russell Henley, who went from No. 101 to 61.

When play resumed after the three-month break, was 127th in the FedExCup standings and promptly fell even lower when he missed the cut at the RBC Heritage and went for a T-32 at the Travelers Championship.

He fought into the playoffs with a T-7 at the Workday Charity Open and T-9 last week at the Wyndham Championship, the grinded even more furiously at TPC Boston.

“Like I’ve said so many times,” said Henley, “it’s good golf out here; you are working hard to shave off a stroke or half-a-stroke every day. It’s such a grind.”

Closing 68 – 269 for his third top 10 since the return to golf, Henley concedes he felt like “walking in” when he doubled the par-5 second and bogeyed the par-4 fourth. That’s how much volatility is in play.

But he calmed down, played the next 14 holes in a bogey-free 6-under, and punched his ticket to the next round.

After the lights went out: Five players who were outside the Top 70 earned their way into next week’s BMW Championship, but no one did it more dramatically than Louis Oosthuizen.

When torrential rain fell, the South African was in the fairway at 18, knowing he needed birdie to get the 70th and final spot.

At 7:15 p.m., he returned, waited a few minutes for Daniel Berger and Harry Higgs to finish on the green, then rifled a 3-iron 235 yards and found the green.

How did he do that in the dark?

“The way I was playing today, it was the best way to play,” he laughed.

Four-over on his round through 13 holes, Oosthuizen figured his season was done. But he birdied the par-3 16th, saw during the 1 hour 15 minute rain delay that he would make it with birdie, so he asked for the chance to hit a few balls on the range.

His putt from 33 feet left him a 4-footer to seal his trip to the BMW as the 70th seed and Oosthuizen converted.

The were in, now they’re out: With five guys moving in, these five started inside the Top 70, but fell out – Doc Redman, Denny McCarthy, Phil Mickelson, Henrik Norlander, and Xinjun Zhang.

Notables on the outside looking in: They made the cut at THE NORTHERN TRUST, so there was still hope. But, first, they needed explosive weekends.

Unfortunately, it didn’t work out for Ian Poulter (73-69), Rickie Fowler (71-69), Tommy Fleetwood (71-70) as they combined to shoot just 3 under when everyone around them was piling up birdies.

For Fowler, the disjointed season was his worst in his 11-year career. He’ll miss the BMW Championship for the first time and whereas he’d never been worse than 43rd in final FEC standings, presently he’s 94th.