Home Golf News & Information The year of the ‘short’ hitter 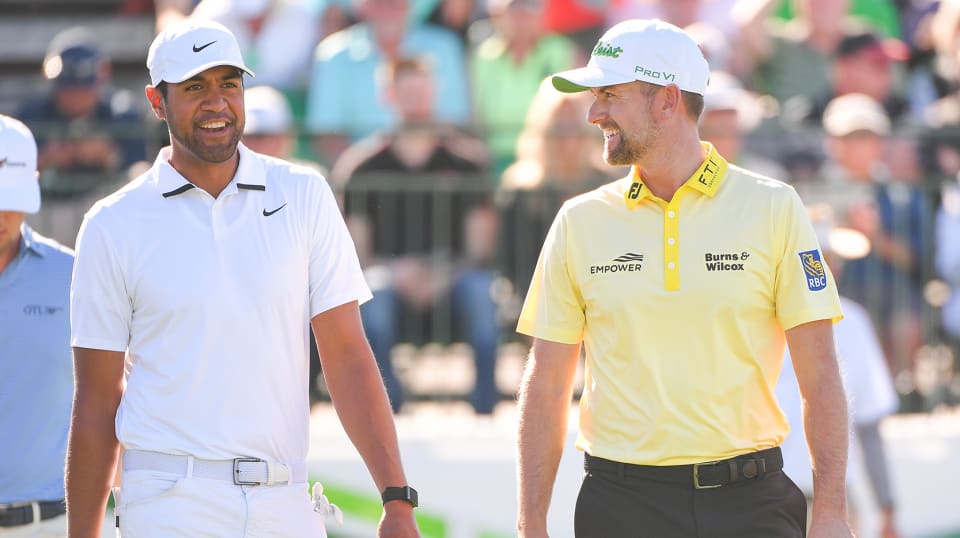 Distance is everything on the PGA TOUR.

Except when it’s not.

Jim Herman, who ranks 188th in driving distance (but seventh in accuracy), won the Wyndham Championship last weekend. Granted, it’s that type of course. Everyone in the field can reach Sedgefield Country Club’s two par 5s in two, and it’s about placement, not power.

But Herman’s surprise win is also part of a trend. Of the four players with multiple victories this season – Collin Morikawa, Webb Simpson, Justin Thomas and Brendon Todd – only FedExCup leader Thomas is in the top 100 on TOUR in driving distance. (Todd is a distant 205th, ranking ahead of just six players) And get this: The longest guy in the foursome has actually throttled back in order to gain control.

“No, I’m glad you brought it up,” Thomas said from THE NORTHERN TRUST at TPC Boston, where the FedExCup Playoffs begin this week. “… I dialed back in distance with a driver and a shaft just to hit a couple more fairways a round. I carry it probably five, eight yards shorter than I did maybe one or two years ago, but I have a little bit more spin so I can control my ball flight a little bit more and I’m just trying to play from the fairway more.

“I feel with my iron game, if I get in the fairway, I can win more tournaments. Yeah, it is quite an interesting stat. I loved it when I saw it because that just kind of proves yet again that length is not the answer. It’s just helpful. Still got to get the ball in the hole.”

We live in an era that is consumed by distance. Bryson DeChambeau packs on the pounds to make huge gains, wins the Rocket Mortgage Classic, and becomes the talk of the TOUR. Will anyone else stand a chance? Is the ball itself going too far?

Lately, though, distance hasn’t been everything.

“I don’t think (a lack of) distance has hurt me,” Morikawa said from TPC Boston, where he is poised to make his first start since his sensational victory at the PGA Championship two weeks ago. “It doesn’t help me as much as what Bryson is doing and the guys that hit it out there top-10 in distance, but it hasn’t hurt me. Obviously I feel the strength of my game are my irons and approach shots, so if I can take advantage of that, yeah, I’d want to have an 8-iron rather than a 6-iron, but I’m still very, very comfortable with a 6-iron in my hands.”

In a way, Morikawa won the PGA partly because he wasn’t so long. Power players like Tony Finau and DeChambeau had to dial back with 3-wood or less at the driveable 16th hole, but for Morikawa the shot called for a stock driver – which he carved around the trees to set up an eagle.

The shot and the win got a lot of people’s attention, especially those who play a similar game.

“I mean, it’s comforting knowing that we’re still playing major golf courses where my length can win,” said FedExCup No. 3 Simpson. “And he won by a couple, so that was cool to see.”

Simpson has gradually added muscle and swing speed over the years to keep up in today’s game. He’s averaging 296 yards off the tee this year, which ranks 108th on TOUR. Morikawa is just 1/10th of a yard behind Simpson in average driving distance.

Still, Simpson said he would like to see more courses where big hitters can’t just fly all of the trouble off the tee, leaving their competitors far behind in more ways than one.

How long is long enough? That depends on whom you’re asking.

“Just last week I got my 6-iron up to 112 miles an hour swing speed,” DeChambeau said from TPC Boston. But to what end? Will he hit an epic 6-iron second shot to reach the par-5 18th hole in two, setting up his own eagle for the win? We’ll have to wait and see, but suffice it to say the TOUR has always had room for a wide range of styles.

At the 2010 Travelers Championship at TPC River Highlands, Bubba Watson prevailed in a playoff against average-to-short Scott Verplank and decidedly short Corey Pavin, who was 50 years old at the time.

“Which is still like the coolest thing I’ve ever seen,” Jim Furyk said earlier this season, still smiling at the memory of the TOUR’s longest (Watson) and shortest (Pavin) doing battle.

Furyk was speaking from TPC Sawgrass, home of THE PLAYERS Championship, which is one place where a shorter hitter (Fred Funk, 2005) can still prevail. Others include Olympia Fields, which will host next week’s BMW Championship. Furyk won the 2003 U.S. Open there. East Lake, where Furyk won the TOUR Championship in 2010 and Jordan Spieth in 2015, is another.

TPC Boston tends to crown brawnier champions, but not always. Simpson, for example, won there in 2011. Olin Browne, no long-ball legend, was 46 when he won there in 2005.

Paul Casey, a long hitter, believes opportunities are fewer for shorter hitters to win, as their margins are smaller. They not only can’t they win with their B game, like Thomas sometimes does, but they often have to get molten-hot with the putter. Herman made 444 feet of putts for the week at the Wyndham, the second most by a winner on TOUR this season, and holed out from 131 yards for eagle in the first round. His final round included a 59-foot putt for eagle.

Herman, 42, was just the second player in his 40s to win this season, after Tiger Woods at the ZOZO CHAMPIONSHIP last fall, and admitted afterward that it can be hard to be short.

“You get old pretty quick out here with the young guys,” he said. “They make you feel inadequate off the tee and especially (with) long irons. You know, it’s mentally frustrating.”

Morikawa would like to add distance, he said, and talks to his trainers about ways to do it. But, he added, he’s in no rush. Indeed, he seems to be doing fine just the way he is. So does Simpson, whose win at the Waste Management Phoenix Open earlier this season came at a course, TPC Scottsdale, that has favored longer hitters like J.B. Holmes and Brooks Koepka. Simpson beat Finau, one of the TOUR’s biggest hitters, in a playoff at Phoenix.

“Good, consistent quality golf, hitting fairways, hitting greens and making a few putts every now and again is still very effective in this modern day of bombing of the ball,” said Zach Johnson, another accuracy-over-distance guy who finished T7 at the Wyndham to make the Playoffs.

Or, as Casey added, “There’s more than one way to skin a cat.”