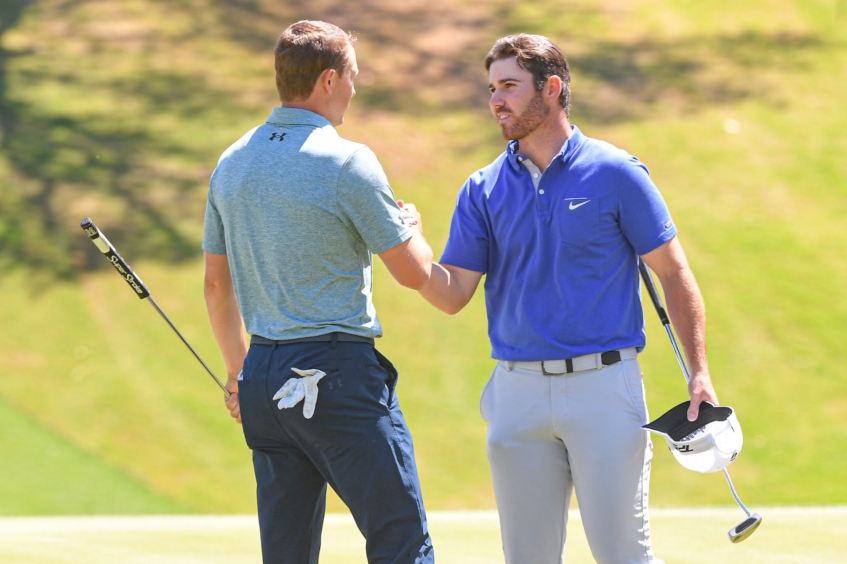 AUSTIN, Texas – With 32 matches going on across Austin Country Club it is easy to miss something while trying to keep up with the drama at the World Golf Championships – Dell Technologies Match Play.

Never fear! We are here to help catch you up on the big events as they happen.

You could have been watching the Jordan Spieth / Matthew Wolff match (like we were) and still missed a bunch of stuff! This was one wild ride that ebbed and flowed as much on positive play as it did on the negative.

Honestly it was like two heavyweight boxers coming out of retirement to take each other on – they were throwing the odd haymaker that had you longing for the old days but at the same time each spent time on the canvass from their own mistakes rather than the others prowess.

Both came into the match having won on Wednesday meaning a victory would have seen them in prime position to advance but their tie now means they’ll need to fight tooth and nail in their Friday matches to get to the weekend. This contest appeared to be Spieth’s for the majority of the day until implosions on the final two holes opened the door for Wolff to howl and steal a tie.

Prior to that the only howling Wolff was doing was of the moaning variety. A wild tee shot on the third hole led to a bogey and a dodgy putt from the fringe on the fourth left him with a testing par putt he duly missed to be 2-down early.

When he reached into his bag to hit a provisional tee shot on the fifth hole things really looked ominous for the Californian going up against the local Texan favorite. But his first shot was found and just as Spieth thought he was cruising Wolff dropped a 30-foot birdie putt to cut the deficit in half.

The joy was short-lived as Wolff’s short game went on vacation on the sixth. He watched a chip roll across the green into a bunker and then blasted his sand shot back across the putting surface.

On the seventh it was Spieth’s turn to lose a hole with a bogey as he failed to get up and down from a greenside bunker – a feat Wolff also had to attempt but did pull off.

Wolff pulled level at the turn thanks to a stunning approach shot to 2-feet, 8-inches on the ninth but not before Spieth’s 46-foot birdie try hit the hole but jumped over it.

But just as each player appeared to get momentum, they’d throw it away. This time Wolff found water off the tee on both the 10th and 11th holes allowing Spieth to quickly set up a 2-up lead once more.

On the 12th Spieth used the honor to slice his tee shot some 60 yards right of the edge of the fairway, leaving him out amongst the fans near a large merchandise tent. But he managed to find his way back to the correct hole and even had a chance from 10-feet to extend his lead but his putt ran out of steam.

On 13 the pair both put their second shots to three feet from the hole and looked at each other with quizzical eyes. Nothing was said so Wolff put his birdie in the hole and then picked up Spieth’s coin. The two came together and had a little chuckle over the moment.

“When I walked up there I saw he was a little closer and I knew I was farther out, so in my mind I’m thinking, well, I’m the one who is putting first, I’m the one who has the farther putt so if I say good-good I might look desperate,” Wolff recounted. “And then he told me after he was about to say good-good but I didn’t, so that’s why he didn’t, and it was a funny match play moment.”

The pair would halve the next three holes leaving Spieth 2-up with just two to play but he would pull his tee shot on the par-3 17th left and it only stayed out of the canyon thanks to wedging between some rocks. His near impossible shot came out into a bunker and his third went from one bunker to another. When he was unable to hole out his fourth shot they moved on.

On 18 Spieth received a nice bounce back into the fairway from his tee shot but couldn’t capitalize and watched in horror as his approach spun back off the putting surface and into the rough. He was unable to get up and down and the hole was lost, leaving both to settle for a tie.

“Nothing against Jordan, but I’m sure he’s thinking he gave me that match and he might have, but at the end of the day I got it up-and-down on 15 for par to keep the match 2-down and then birdied 16… ended up making par on 17 and then 18 technically I made a birdie,” Wolff said.

“So going 2-under in the last four… I felt like I did what I could to put that pressure on him and try to get that tie.”

On Friday Wolff plays Matt Fitzpatrick and Spieth takes on Corey Conners. A win for either guarantees at least a playoff to advance.