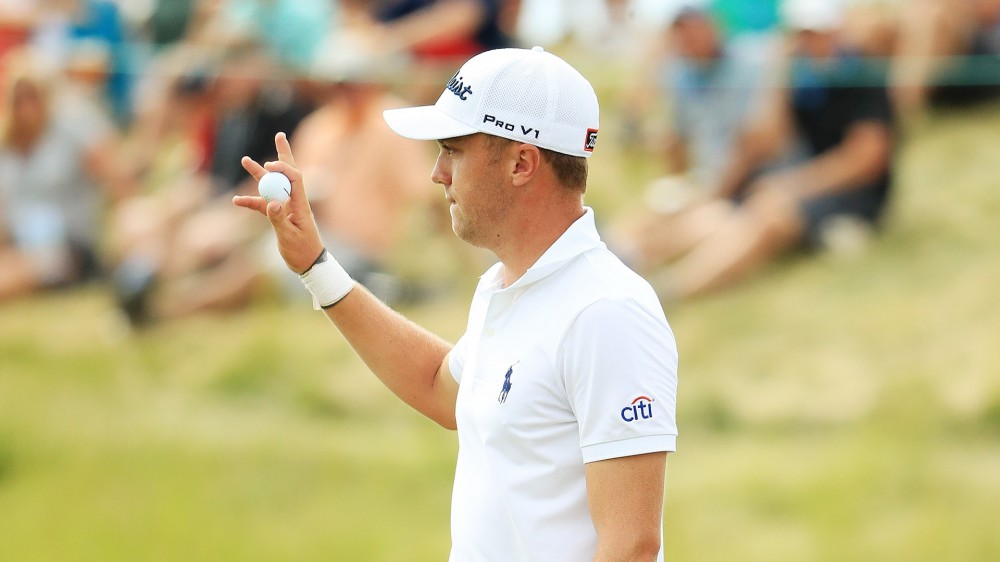 ERIN, Wis. – Justin Thomas’ father, Mike, was waiting for his son after his third round at the U.S. Open and had just one question. “You’ve got a ball for me?” the elder Thomas said.

Thomas had just rolled in an 8-footer for eagle at No. 18 for a record 9-under 63 at Erin Hills, the lowest score in relation to par at the U.S. Open. His record card propelled him two shots clear of the field to 11 under with the leaders just past the turn.

The Thomas’ have a tradition that every time Justin does something special on the golf course like make a hole in one or shoot 59, like he did earlier this year at the Sony Open, Mike Thomas puts the golf ball in a special frame.

“We’ll have to find a couple more spots in the rack, it was pretty cool,” Mike Thomas smiled.

Thomas scorched the front nine at Erin Hills with birdies at his first two holes. After missing the fairway at the fourth and making bogey, Thomas added birdies at Nos. 5, 7, 8 and 9 to turn in 31. But it was his finish that was truly historic.

A 26-footer for birdie at the 17th hole set up his dramatic finish, and a 3-wood from 310 yards at the last nestled to 8 feet for his closing eagle.

“I told [caddie Jimmy Johnson] walking up to the 18th green, ‘Let’s try to be a part of history,’” Thomas said.

Johnny Miller set the previous record with an 8-under 63 at the 1973 U.S. Open at Oakmont and Thomas’ 63 was the fifth in championship history.

“Nine under is an unbelievable score even for a regular PGA Tour event let alone an event with the pressure of the U.S. Open,” Miller told Golf Channel. “Justin’s a streak player, he’s a lot like me, I was a streaky player. He has four wins already in his career with two of them kicking off 2017. This just adds to the fabulous year he’s having.”