Halfway through the final event of the season, we have a three-way tie atop the Tour Championship, led by Player of the Year front-runner Justin Thomas. Here’s how things look after 36 holes at East Lake, where all eyes are on Thomas as he looks to lock down the FedExCup:

What it means: The top five players in the season-long points race coming into the week (Jordan Spieth, Thomas, Dustin Johnson, Marc Leishman and Jon Rahm)  can win the FedExCup with a tournament victory. But suddenly, they have some company as they battle for the season-long trophy. Paul Casey, Webb Simpson, Justin Rose and Brooks Koepka all shot under par on Friday and could jump up and steal the title and the $10 million in prize money if the top 5 – namely Thomas – should falter.

Round of the day: Hard to argue with Thomas’ 4-under 66. The 24-year-old showed the same resolve down the stretch Friday as he did winning his first major title just last month, eagling the 18th hole to pull into a share of the lead and overall FedExCup lead. Thomas made back-to-back birdies at Nos. 6 and 7 to go out in 33, and then made another birdie at 13 before giving a shot back on the next hole. On the par-5 finishing hole, JT nuked a 5-iron from 229 yards to 5 ½ feet and sank the putt for the eagle 3.

Best of the rest: Rose and rookie Xander Schauffele matched Thomas’ Friday 66, but one man bested it with a Friday-best 65 … Patrick Reed. Captain America skyrocketed up the leaderboad with six birdies and just one bogey to sit only a shot off the lead. Simpson (67) also shares the lead and, at No. 16 entering the week, is trying to become the lowest-ranked player to win the FedExCup since Bill Haas (25) won it in 2011.

Biggest disappointment: A case could be made here for Jordan Spieth (the pre-tournament FedExCup No. 1) after following up a 3-under 67 with an even-par 70, but the three-time major champ can still get himself back in the mix with a low weekend. The same cannot be said for Rickie Fowler, who is 7 over after rounds of 73-74. Fowler is one shot in front of last place and will be in the first group out on Moving Day with fellow Presidents Cup teammate, Kevin Chappell.

Main storyline heading into Saturday: Thomas is the man to beat. Not only did he come in to East Lake in the driver’s seat for PGA Tour Player of the Year, but the PGA champ eagled his final hole of the day to grab a share of the tournament lead and the No. 1 spot in the race for the FedExCup with just 36 holes to play. Thomas’ challengers for the FedExCup title and $10 million prize include a couple of guys who haven’t won this year in Casey and Simpson, as well as Spieth, Johnson, Rahm and Leishman.

Shot of the day: Pat Perez was having a rather pedestrian Friday at East Lake until his approach shot at the par-4 16th hole from 173 yards away that took a couple of bounces before hitting the pin and dropping in for an eagle. Perez capped it off with an epic club flip before finishing with a 2-under 68 on the day.

Quote of the day: “I’m just trying to play the best I can, just trying to win the tournament … the rest comes with it.” – Thomas, on how he keeps the event and the FedExCup title in perspective. 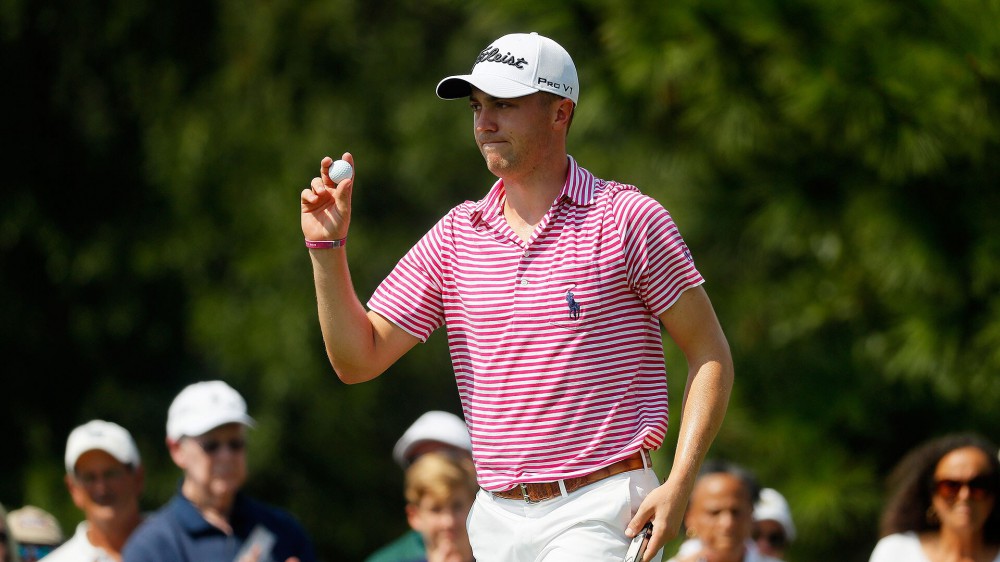