With a 3-under 68, Justin Thomas stormed from two shots back at the start the day to claim his first major title, the PGA Championship. Here’s how the major championship season wrapped up Sunday at Quail Hollow.

What it means: This is Thomas’ fifth PGA Tour win, his fourth this season, and his first on the U.S. mainland. Two behind to start Sunday, Thomas made the turn in 1 under and took advantage of two bits of good fortune at the par- 5 10th, when his drive ricocheted off a tree into the fairway and his birdie putt finally dropped after a lengthy hang over the hole. Three holes later, he opened up a two-shot lead when his chip from off the green at the par-3 13th found the cup. He played his final five holes in even par, navigating the Green Mile in par-birdie-bogey, to win by two. The son and grandson of PGA of America professionals, Thomas is now the PGA champion.

Biggest disappointments: Playing alongside Thomas in the second-to-last pairing and trying to deliver Japan its first major win, Hideki Matsuyama (72) recorded just a single par on the back nine with five bogeys and three birdies. One behind Thomas on the 16th green, Matsuyama lipped out a 4 ½-foot par putt to fall two behind. His bid to win then drowned in the creek on 18 when his tee shot at the home hole found the water. In the final pairing behind Thomas and Matsuyama, both Kevin Kisner (74) and Chris Stroud (76) played Quail Hollow well over par Sunday.

Rounds of the day: Reed, Molinari and Fowler all made Sunday charges with rounds of 4-under 67. Fowler first posted 5 under, overall, and the Molinari got into the clubhouse at 6 under. Reed reached the 18th hole 7 under before a closing bogey dashed his chances.

Best of the rest: Dustin Johnson and Marc Leishman also carded 67s to both tie for 13th.

Shots of the day: Thomas’ delayed birdie make at the par-5 10th:

And his chip-in for birdie at the par-3 13th to open a two-shot lead:

Quote of the day: “He gets a squirrel and a Verne Lundquist at the 10th.” – Nick Faldo on Thomas’ birdie to start the back nine 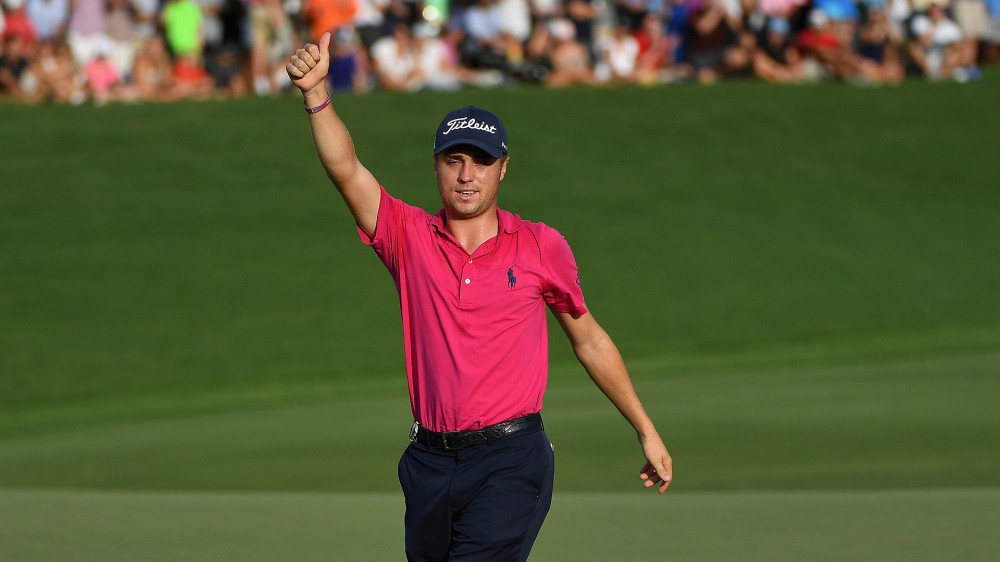 Inbee to qualify for Korean LPGA Tour’s Hall of Fame