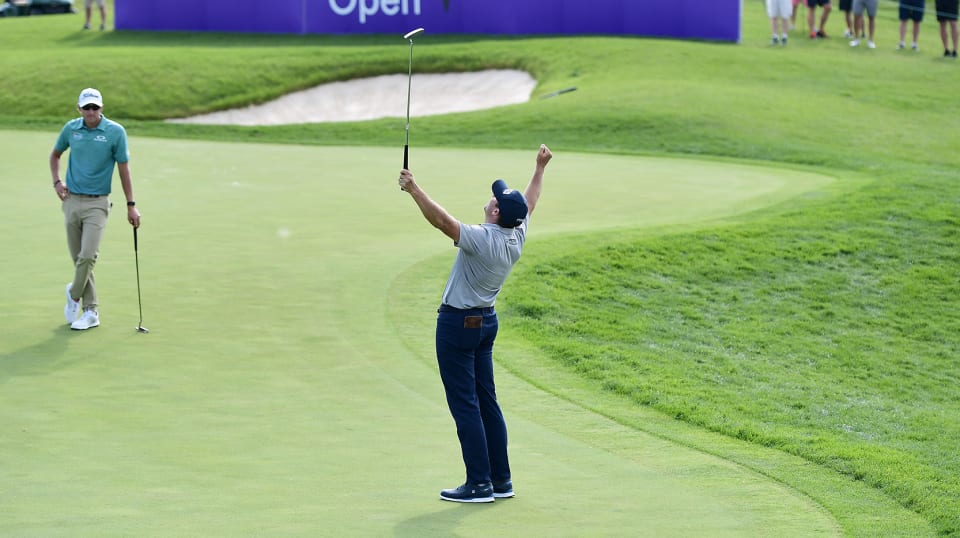 Finau falls short again: Glass-half-full Tony Finau contended once again at a tournament with his T3 finish in Minnesota. Glass-half-empty Finau failed to convert another great chance for victory, and since his win at the 2016 Puerto Rico Open he now has 30 top-10s, nine of them top 3s, without winning. With each missed chance a little more scar tissue grows, but he remains confident the elusive win is just around the corner. “They don’t give out second‑place trophies, third‑place trophies, I’ve learned that the hard way with lot of them coming early in my career, but I continue to just believe and hope for the best for my future,” he said.

FedExCup focus: With just three weeks remaining before the top 125 players make the FedExCup Playoffs, it was a huge week for those trying to secure a spot. Thompson jumped 112 positions from 151st to 39th, a huge move that gives him a realistic shot at getting to the TOUR Championship where the final 30 players fight it out for the FedExCup and $15 million. It was a big week for a handful of others who also secured spots in the postseason. Emiliano Grillo (T3) pushed up from 122nd to 86th, Alex Noren (T3) jumped from 116th to 82nd and Cameron Davis (T12) improved from 112th to 98th. Others increased their chances at a Playoff run with time running out. Charl Schwartzel (T3)  moved from 145th to 114th, Bo Hoag (T12) went from 131st to 119th and Nick Watney (T12) came in from 130th to 118th. Three huge names remain outside the 125. Former FedExCup champion Justin Rose is 127th, Sergio Garcia sits 130th while Brooks Koepka, who missed the cut in Minnesota, is languishing in 155th as he prepares to defend his World Golf Championships–FedEx St. Jude Invitational and PGA Championship titles over the next two weeks.

“It just means the world to me because it solidifies in my mind that I’m one of the best golfers in the world and that I can compete every single week out here.” – Michael Thompson

“This weekend I had nothing to lose, I’m in 50th place starting on Saturday morning. So tried to cruise up and here we are.” – Adam Long modestly describing a 63-64 weekend to finish second after making the cut on the number

The Wyndham Rewards Top 10 is a season-long competition that offers a $10 million bonus for the 10 golfers who end the regular season at the Wyndham Championship inside the top 10 in FedExCup points. The player atop the standings will earn $2 million, with varying payoffs for the others through $500,000 for the 10th place finisher.

There was no change in the top-10 after the 3M Open with runner up Adam Long making the closest move to the rewards zone. Long moved up to 20th spot to give himself a chance to make a run over the final three weeks that remain until the start of the FedExCup Playoffs.