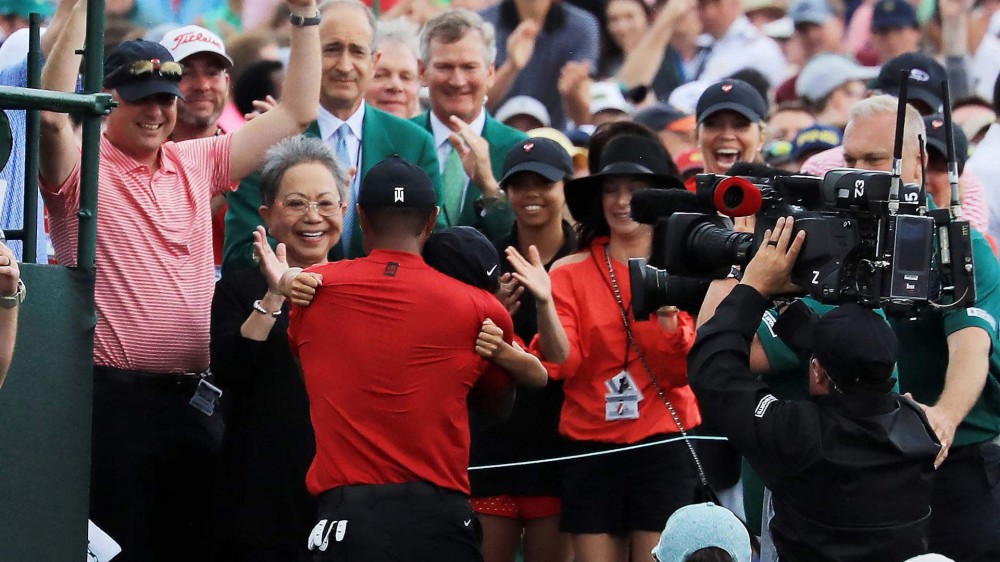 AUGUSTA, Ga. – Tiger Woods tapped in to win his fifth green jacket and the patrons at Augusta National started chanting, “Tiger! Tiger! Tiger! Tiger!” It was the ultimate redemption story for a man who has been through so much since he last won a major in 2008.

When he walked off the 18th green Sunday, he was first greeted with a big hug from son, Charlie. His mother, Kultida, and daughter, Sam, followed closely behind. The scene evoked memories of Woods’ first Masters title in 1997 when he walked off the green and hugged his late father, Earl, who passed away in 2006.

“My dad shouldn’t have come in ’97,” Woods said. “He had heart complications and wasn’t supposed to fly, but he flew and came. Gave me a putting lesson on Wednesday night and the rest is history.”

This was the first time that Sam and Charlie were able to witness their old man win a major championship. Both flew to Scotland last summer to watch Woods at Carnoustie, but he wasn’t able to win the claret jug. He was determined not to let them down again this year. In fact, Woods had to virtually beg Sam to come to Georgia late yesterday after her soccer team lost in a state championship match.

“I think the kids are starting to understand how much this game means to me and some of the things I’ve done in the game,” Woods said late Sunday, while wearing the green jacket. “If I tried to swing a club I would be on the ground and I struggled for years, and that’s basically all they remember.

“Now I’m able to play golf again, and do it at an elite level again, which is something that I’m just very blessed to be able to have that opportunity again.

“So, for them to see what it’s like to have their dad win a major championship, I hope that’s something they will never forget.”