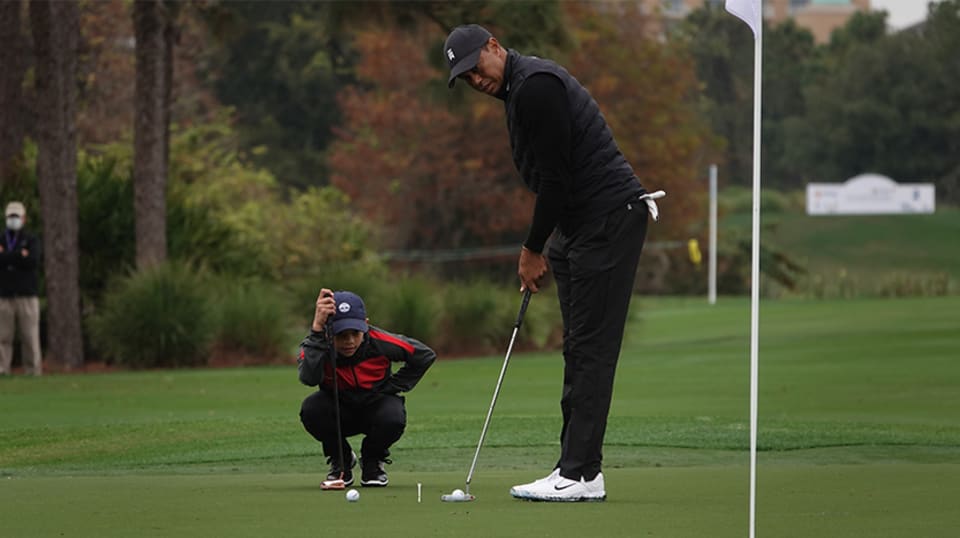 ORLANDO – The tournament itself will not begin until Saturday, but there was no shortage of anticipation as the main act – a duet – took the stage for pro-am day at the chilly, breezy PNC Championship at The Ritz-Carlton Golf Club Grande Lakes on Thursday.

And there were two immediate reactions.

The first impulse, only human, was to smile as 11-year-old Charlie Woods warmed up alongside his dad on the range. Although he’d won some junior tournaments, he had largely eluded the cameras. Now, though, his fundamentals, tempo, mannerisms – heck, even the Nike Golf shoes – were a sight to behold. Here, before the world, was a sort of Mini Me version of Tiger Woods.

“They’re very similar,” said Justin Thomas, a friend of the Woods family in South Florida. “I mean, who wouldn’t want to be like your dad if your dad was Tiger Woods? He definitely has all the mannerisms. I think people at home, and you all, will get pretty good entertainment out of watching him twirl the club and walk putts in and fist pump.”

RELATED: How to watch | Expert Picks | LaCava and son to caddie for Team Woods

The second impulse, also human, was to tap the brakes. Tiger is arguably the greatest golfer of all-time, and any comparisons seem patently unfair. This week is meant to be fun, nothing more. Heck, it’s not even clear yet whether Charlie likes golf more than his first love, soccer.

“It’s so much fun for me to see him enjoying this, enjoying the game,” Woods said.

But is he old enough to be doing this?

“He’s been playing junior golf tournaments,” Woods said, “and he’s been out in front and having people video him. This is a different world we live in now; everyone has a phone.”

The important thing, he added, again, was that Charlie is enjoying himself. Clearly Woods is trying to do what Mike Thomas, a longtime PGA teaching professional in Goshen, Kentucky, did for his son Justin. Above all, both have stressed, kids need to have fun.

“He obviously has all the tools already,” said Mike, who helps Charlie with his game in South Florida and who also will play the PNC, with Justin. “The two things that are most incredible to me are how much speed he has – I mean he’s a small person, and he gets that club moving fast – and his golf knowledge is unbelievable. I get that his dad is Tiger, but he’s 11!

“He hits fades, draws, low shots and high shots,” he continued. “He sees kicking balls into a bank and stuff. Most 11-year-olds just want to hit one shot; he’s got a lot of shots in his arsenal. It’s going to be interesting to see what happens with him because he’s got a ton of talent. What’s cool is he looks like he’s enjoying the game. He doesn’t get all worked up over a bad shot.”

The PNC will feature major winners (Bernhard Langer and son defend) and family members (mostly sons, but also fathers and a father-in-law), and utilize a scramble format for all 36 holes. Team Woods and Team Thomas will play together, which makes sense. Charlie had expressed an interest at the same time that Mike confessed to Justin, “I’m not getting any younger.”

Mike, who with wife Jani recently moved into a winter home in South Florida, is Charlie’s only teacher other than Tiger. “He’s helped from the word go, he’s been a part of it,” Woods said.

At the same time, Justin, 27, has taken on a sort of big brother role. Indeed, if Charlie is to become a golfer, if he makes a career of it, Thomas told a story that will likely endure.

“I was over at Tiger’s house, and us three were having a putting contest and we played nine holes, us three, straight-up, (Charlie) didn’t get any sort of advantage,” Thomas said. “I think he was 8 years old, 9 years old at the time. And it was one of the three combined total weeks I’ve held No. 1 in the world, around that time. And Charlie was leading going into the last hole.

“He was 2 under, I was 1 under, and I think Tiger was even or 1 under or something like that,” Thomas continued. “Charlie was mouthing off, you know, he’s like, ‘Here I am, I’m 9 years old beating the No. 1 player in the world and supposedly the best golfer of all time.’ And he three-putted and I made it, so I beat him. And that shut him up pretty quick.”

Thomas laughed, as did his audience, and there we were again, with those two competing impulses. Awe at the thought of a 9-year-old beating his father and Thomas, and caution for an 11-year-old entering the hype machine.

The PNC won’t start until Saturday, but the word of the week, the E word, is already clear.