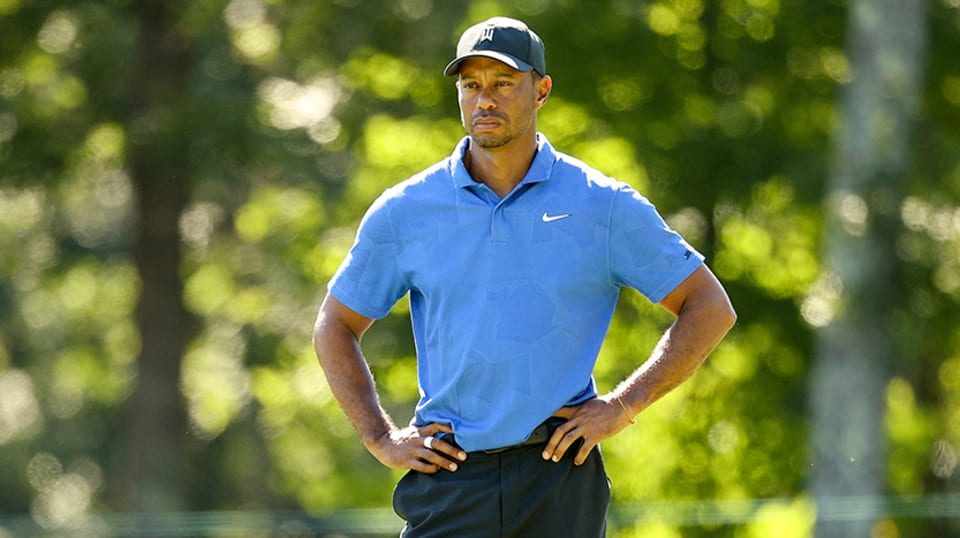 NORTON, Mass. – He was hot under the collar, but it had nothing to do with his golf, nor his decision to put his favorite putter back into play.

Nope. The problem early in Tiger Woods’ opening round of THE NORTHERN TRUST was more than the bogey he made on his fourth hole, the par-4 13th. It was the hot oil he uses to loosen up his cranky back.

“I decided to put some up on my neck,” Woods explained, “and it’s not as tolerant as my lower back so it gets awfully hot.”

That situation remedied with a bottle of ice water, Woods watched the heat transfer to his golf game at TPC Boston. He played a nine-hole stretch – the par-5 18th to the par-3 eighth – in 5 under.

Solid stuff that would have ignited roars had there been spectators, this time the hot stuff was halted not by a water bottle, but a wide-right drive at the par-4 ninth. Woods made bogey after he couldn’t muscle the 207-yard shot out of the rough and missed the green. Still, for the most part Woods appeared content with his 3-under 68 that left him four off Harris English’s clubhouse lead after the morning wave.

Playing just his ninth competitive round since the PGA TOUR returned in mid-June after a three-month break, Woods was accompanied by the putter that has been in his hands for nearly everything that made him an icon. He had used the Scott Cameron Newport 2 GSS in 14 of his 15 major championships, so when he put it on the bench for the PGA Championship two weeks ago, it was considered big news.

Woods explained that he liked the longer shaft and heavier feel to the Scotty Cameron Newport 2 Timeless, but he conceded that the results at TPC Harding Park were less than what he envisioned. “Had one good day, the first day (he shot 68), and then after that I didn’t really putt well,” he said.

This week, at a place where Woods has won and played consistently well, the old standby is in play.

“I had a good feel today. I had nice pace and I like the speed of these greens. They’re fast,” said Woods. “Even though they’re soft, they’re still quick. I just felt comfortable.”

The numbers supported him, even if they weren’t off the charts.

He needed just 29 putts, and at the completion of his round his Strokes Gained: Putting (+1.15) was ranked 18th. True, his longest putt was just 16 feet (at the par-3 third) and he made a made a modest 66 feet, 5 inches of putts, but never did he appear stressed out on the putting surfaces.

“That’s one of the weird things about golf,” he said. “It’s just the way it is sometimes.”

Of course, here’s another aspect of golf that is hard to ignore: It’s the tee shot that puts everything in motion and this is where the numbers were not so kind to Woods in Thursday’s opening round. He did hit five of the first seven fairways, but moving to TPC Boston’s front nine, Woods hit the first fairway, then missed each of the next six.

OK, a disclaimer is needed, however, as the 298-yard par-4 fourth is a hole that players try to drive, and Woods was not unhappy with finding the bunker; he made birdie. Coming on top of the 16-footer he had made at the par-3 third, Woods was officially on the move. He continued nicely by converting a 6-footer for birdie at the par-5 seventh, then hit arguably his best iron shot of the day to birdie from 7 feet at the 225-yard, par-3 eighth.

If the closing bogey unsettled him, Woods didn’t let on.

There have been questions about a busy stretch of golf, possibly four starts in five weeks beginning here at THE NORTHERN TRUST. But the 44-year-old Woods, the guy who began his day with hot oil to warm up, just shrugged.

“I’ve got to get to Atlanta (and the TOUR Championship for the top 30 in the FedExCup standings) first,” he said. “I’m not in.”

Not currently, as he sits 49th in the standings. But an opening 68 was surely a step in the right direction.