Titleist 917 F2 F3 Fairway Review – Of the 917 woods it is the Titleist 917 Fairway that has undergone the greatest change, not least of which in what it is called.

Since the Titleist 910 fairways in 2010, there has been the standard F and the lower spinning Fd and this applied to the hybrids too. Now that the 816H hybrids have been moved to the irons cycle, the nomenclature of the fairway now mirrors the driver as the larger 917 F2 replaces the 915 F and the smaller 917 F3 replaces the 915 Fd. 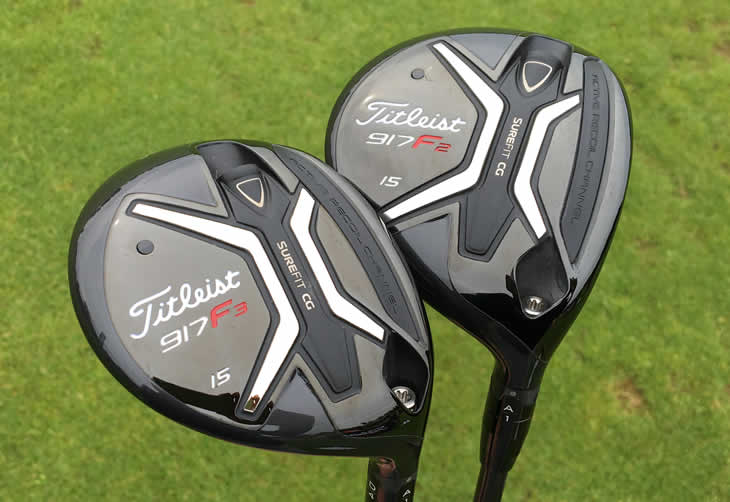 Like the Titleist 917 driver the 917 fairways also feature the SureFit CG adjustable sole weight that can vary the amount of weight in the head and also where it is placed.

This is done using a cylinder made of composite material with either steel or tungsten inside that is inserted into a chamber on the sole. There are five possible weights from 8g to 16g and you get two with your club for your selected weight.

One is neutral with the weight evenly balanced and the other has a heavy end that is either inserted towards the toe to create a fade or towards the heel to create a draw.

The weight chamber is really just two slots and this means that the infrastructure to hold it does not take up too much weight that can be used to better effect elsewhere.

The chamber itself is at an angle to control the level of spin and maintain some consistency. If you fade the ball you add spin, so the chamber is closer to the face at the toe so that when you have the heavy end there to counteract the fade, the position of the weight closer to the face helps offset more of the fade spin.

With a draw the opposite is true and the heavy end being further back from the face will add spin to help reduce the effect of the lower spinning draw.

The final change is in the ARC 2.0 Active Recoil Channel. This is technically more of a slot now as Titleist has cut through the sole on the 917 fairway and filled it with an elastomer insert for legal reasons to make it conforming as well as to stop and dirt getting in there.

Essentially though, the steel sole of the fairway is not one piece and the elastomer allows the lower section of the face to work with the variable face thickness on the Radial Speed Face 2.0 to generate some extra ball speed.

It does make the 917 fairway sound a little hollower than the 915 with its ‘sealed’ slot, so whilst it is not quite as aurally appealing, it is still passable.

Combine all this with the tried and trusted SureFit Tour hosel and you have one of the most adjustable fairway woods in the market, especially when you factor in the two head shapes of the F2 and the F3.

There is a wide range of lofts from 13.5° up to a 21° head with no numbers on them now, so you will have to ask what loft you are using instead of which wood.

For those who find head cover socks annoying, and my anecdotal research revealed there are many, then joy will abound as the 917 fairways now come with a sock-less head cover that slips on easily and is held firmly in place.

It is a ‘fuller’ pear shape, which I think means that it has been dodging the salads to give it a bigger profile at address.

The Titleist loyalists among you might spot the slightly lighter colour of the crown that is now ‘Liquid Slate’ instead of the more usual black. You have to put it against the previous model to really notice it, but it is a change for Titleist woods so it will be interesting to see how the faithful take it.

At the 917 launch I spent some time on Trackman with the Titleist fitters and sure enough the F2 gave a higher launch angle of a degree or so over the 915 F.

The spin was roughly the same so that combination was giving a little more distance, but more importantly was easier to hit off the deck.

From the tee it was also very good and the larger profile would make this a good driving fairway. However that is not how you choose your 917 fairway, as it is more about getting the head that will deliver the best launch conditions for you and in that respect the F2 was a little too spinny for my supersonic swing.

The alternative of course was the Titleist 917 F3 fairway. The smaller 169cc 15° head looks more compact front to back, but is wider and deeper than the 915 Fd.

Visually I would probably prefer the F2, but the F3 was just on the right side of being too compact so I don’t think anyone should have an issue with it.

In the previous range I had been fitted into the Aldila Rogue, which is a solid shaft in all meanings of the word. The 917 fairway shafts include updated versions of the Rogue, Diamana Dialead and a Fujikura Speeder that all seem a bit kinder than before.

Despite this kinder Rogue, my fitter recommended the Diamana Dialead Blue at 60g and the lighter feel and responsiveness was excellent.

I had a little bit of a fade going on, so we took out the standard weight and inserted the unbalanced weight with the heavier end towards the heel to help straighten things up and that worked pretty well.

It did change the feel of the head very slightly, but not by much. You can tell which weight you have in by the symbol you can see through the end of the screw. A dot is the neutral weight and if you use the draw/fade weight, a + is for the heavy end and a – for the light end.

Bear in mind you will see the opposite symbol to the driver if you have them both set the same way as the weight is inserted in opposite ends for each club.

Overall my feeling on the 917 fairway is a little split. I like the changes to the design as it makes what was quite a low spinning 915 fairway a lot easier to get airborne, especially with the Rogue shafts.

You can tell that a lot of thought has gone into the adjustable weight design and the ability to move the CG left and right and also forward and back by changing the amount of weight is very clever.

The effects are noticeable and with the weight in the fade/draw settings the head still feels ‘normal’ and not unbalanced in any way.

On the other hand the sound is maybe a little less Titleist-like, as is the lighter shade of black, which just holds me back a little from going all mushy over it. However these are subjective, touchy-feely things which can be important, but which really don’ t affect the club’s performance.

In that regard the Titleist 917 fairway brings new technology to their fairway range and they have achieved weight adjustability in fairways with the minimum of disruption, which is a very good achievement. Combined with the improvements to the Active Recoil Channel and the more forgiving face, it makes the Titleist 917 fairway a worthy performance upgrade to the 915.