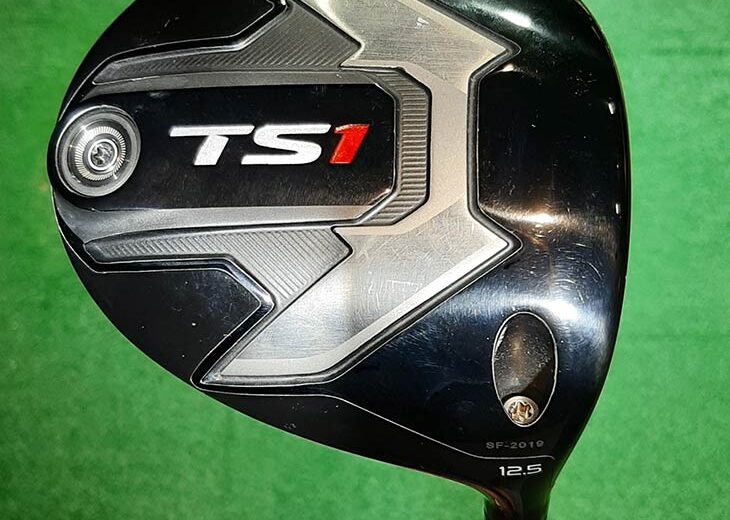 Titleist TS1 Driver Review – It’s no secret that Titleist Drivers are always popular on tour, but recently they have been seen in the bags of even more players this past year due to the launch of the TS range.The TS1 and TS4 Drivers have been added more recently to bookend the very successful TS2 and TS3 models, in order to cater for the full spectrum of golfers from elite players to beginners. 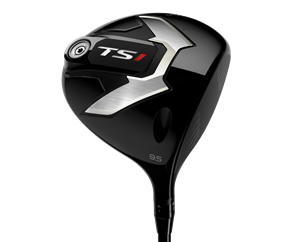 In terms of the TS1 specifically, Titleist claim that it is ‘the fastest way for players with moderate swing speeds to experience the joy of effortless distance’.

This sounded right up my street and so I couldn’t wait to give the TS1 a go and try out the ‘swing-easy’ theory!

Titleist is saying that the easiest way to swing the club faster, without swinging any harder, is to make the club lighter. This makes sense – you only have to look at the SwingSpeed trainers that Phil Mickelson has been using to increase his distance to see that these methods work.

As TS stands for ‘Titleist Speed Project’ you’d hope that the manufacturers were going to make it easier for you to generate a bit more zip in your swing, and the TS1 has been optimised to do just that.

The TS1 weighs just 275 grams thanks to a head which is 8g lighter, a light shaft coming in at around 45g, and even a lighter grip which is 20g less than a standard Golf Pride.

Besides that, you get all the usual features of a Titleist TS Driver, including an ultra-thin titanium crown and new Radial VFT face which is the fastest Titleist has made, maximising both ball speed and forgiveness.

The centre of gravity (CG) has been placed deeper in the head to help generate the right launch and spin characteristics for better carry distance, whilst still maintaining high MOI levels for forgiveness across the face.

This then makes it the featherweight of the driver world, aimed at seniors, ladies, juniors or anyone else who can’t create the swing speed required to fight the ball far enough. Let’s find out if it still packs a punch…

I compared the TS1 Driver to the other models in Titleist’s TS range whilst in the capable hands of Titleist fitter, Frazer Jones at The Range in Manchester, using Foresight launch monitor technology to analyse my data.

I went through a full fitting process, trying each TS driver, which you can watch in full here:

With the TS1 specifically, I wanted to see if this lighter club equated to a faster clubhead speed and therefore faster ball speed, and whether it provided consistent, forgiving results for the average golfer as Titleist promise. Could I really get effortless distance?

Titleist say that the TS1 comes complete with a ‘modern shape’ which is a little like a pear, extending further out the back which allows them to lower the CG. To be honest I thought that head looked a little for me at address, and this back section is a little long. I much prefer a more traditional, rounded shape like the TS3 Driver provides.

The finish is shiny on top rather than being matte, but it’s still a nice clean head design with just a small triangle to aid with alignment which I liked.

As you would expect, the driver felt lightweight and easy to swing. The thin grip helps with this but if you have big hands or prefer to add extra tape to your grips, then this will affect the total weight of the club.

It’s also important to note that despite the club being lightweight my club head speed did not actually increase during testing, instead hovering around my usual mark of 94mph with a couple even dipping slightly below.

As a result, I did not see too much of a difference in ball speed either, with the maximum number of 129mph still being within a couple of miles per hour of the mark set by the other drivers in the TS range.

During testing my ball flight was consistently to the left of target and whilst the distances were all pretty similar, it was short of my usual driver distance by around 10 yards.

Having said that, the club did perform and feel a little better than I thought it might do, being geared towards high-handicap golfers. With a few more tweaks during my fitting session here and there from Frazer, I think we could have got closer to my normal numbers which is impressive for a driver of this standing.

Considering my swing speed was almost 10mph faster than Titleist would recommend for users of this driver, the spin numbers were pretty good on the whole. However there was one shot which ballooned up into the air with over 4000rpm, carrying just 195 yards and coming down with snow on it!

This would be my biggest fear with a driver like this, as someone who hits the ball high enough anyway this kind of easy launch and flight would not be suited to my game.

Titleist has traditionally had a reputation as a player’s brand and this may have discouraged some average golfers over the years. The fact that they don’t produce a specific ladies range such as Ping also means that some golfers have been excluded from using the equipment too.

However with this driver, and the TS range as a whole, it seems to indicate a bit of a shift away from that reputation. For example I’m thinking of my friend Karen, who would never usually consider a Titleist driver but I think she would love the TS1.

She is a single figure golfer who is only 5 feet tall and struggles to flight her golf ball. She plays on a links course so in the summer her ball runs all day, but in the winter she struggles a little more.

Her swing speed is perfect for this club, and the added spin will give her the launch needed to gain those much-needed carry yards off the tee.

In my view it seems like Titleist are now trying to produce a club to suit every golfer, and I have to say that their excellent fitting process is making it a lot quicker and easier to do so too.

At present I wouldn’t use this club as my swing speed is too fast, something which I never thought I would say! The club is aimed to spin more but this isn’t something I am looking for.

However if I was a little older and it would definitely be one I’d consider as the easy launch and lightweight feel will make it easy to use when I go in search of a little more speed.