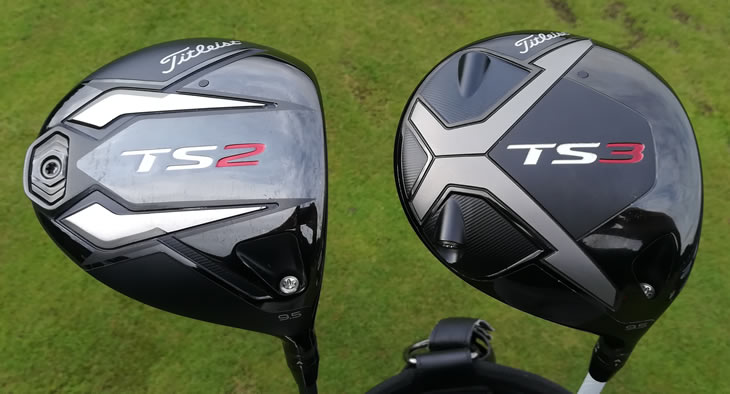 Titleist TS2 Driver Review – Titleist TS3 Driver Review – Over the last year or so when I was asked about the best drivers, the Titleist 917 was always held up as one of the most consistent drivers. However, in retrospect even Titleist will say that it wasn’t as fast as some of their competitors and part of that was due to the fact that they built in more margin for error than they needed to in order to make the faces robust enough for 10,000 strikes, when most will never get anywhere near that.However in today’s world of launch monitor fitting and better production techniques the Titleist (or should I say FootJoy) gloves are off and the Titleist Speed Project has delivered the TS2 and TS3 drivers. 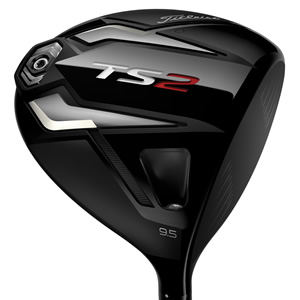 Titleist say that they started again from the ground up to focus on speed, launch and spin and now both heads in the range are 460cc, albeit in slightly different shapes.

The crown is claimed to be the thinnest titanium crown in the market and is 20% thinner than 917, but that just equates to 1mm.

The face is 0.35mm thinner which saves 6g, a huge amount in clubhead terms and now the grooves are laser etched rather than milled in as a result.

The ARC slot feature in the sole has also gone as Titleist say that they can achieve the ball speed and launch gains it delivered in other ways and one of the other benefits is that it reduces weight located in the front of the sole so that it can be moved more towards the back.

The overall shape of the head has also been streamlined by 20% and this is done through raising the top just behind the leading edge.

This steeper camber from the face to the top of the crown and then a sharper drop off behind that is effectively what improves the aerodynamics. It holds the air closer the head for longer in the same way these air tripping devices like SpeedSteps and Turbulators do and is just another way of achieving a similar result.

So as you can see they have really gone back to the drawing board in a lot of ways and when you now go for your Titleist driver fitting you will have two head options to match your swing to.

Whereas both 917 driver models had the SureFit CG adjustable sole weight, it is only the TS3 that has it this time around.

This weight cyclinder fits into the rear of the sole and enables Titleist to increase or reduce the weight of the head, which in turn will affect the swingweight and MOI, which is particularly useful when choosing shafts. Instead of the actual weights on the alternatives, they just show the difference from standard, ie +2g.

With 917 you got two of these with each club, but now there is one that does both jobs. As well as being a neutral weight, you can also remove the magnetic cap from one end and put it on the other end to create an unbalanced weight.

Place the heavy end towards the toe and you create a fade bias and vice versa for a draw bias.

Loyalists who had to be mopped with a damp towel when the 917 came out all silvery, will also no doubt be pleased to see the return of the traditional Titleist black head colour and the roundel logo on the crown reverting to it’s original direction.

I did like the TS3 and the sound was one of the other key benefits of the new model. Without the ARC there, the TS drivers sound much better and back to where they were with the Titleist 913 driver.

However it is more for fine tuning and the slightly shorter and taller head should give it a lower spinning profile. In the past this has been better for me than the higher spinning D2 shape, but that is what is different about TS2 as I now explain.

The big change in TS2 is that the SureFit CG cylinder is replaced with a single sole weight at the back to draw that CG back and make it easier to launch.

As part of a Titleist fitting they can switch this out for a lighter or heavier one, which is not something most manufacturers do for punters, so that is good to see.

At address the head does look a little larger but thankfully more rounded and not as drawn back as previous D2 versions of Titleist drivers.

The face does look squarer at address as a result and this is not an optical illusion as there is 0.5° less bulge or curvature across the face.

Usually bulge and roll is there to add forgiveness and Titleist say they make up for this with the deeper and higher MOI face. Making the face wider, thinner and flatter should up the ball speed and improves the forgiveness on 917.

So does it? Having been fully optimised across both heads and a choice of four shafts my TS2 with the Mitsubishi Kuro Kage shaft with 9.5° loft adjusted up 0.75° to D4 using the SureFit Tour hosel took my previously fitted 10.5° 917 D3 in a battle of the generations on Trackman.

Now you are going to see a lot of these Titleist speed and distance gains elsewhere and I am delighted to say that it is true. As you can see below the TS2 increased clubhead speed by 3mph and that lead to an extra 8 yards of carry and with a slightly lower height and landing angle a bit more run out too.

What I also liked was the consistency of ball speed from one shot to the next, which did not vary as much as it did with 917, so you can see that the forgiveness is there.

It may seem that it goes lower, but in real life the flight seemed about the same and the lighter feel to the club made it feel easier to get going than the slightly heavier feel that Titleist woods were known for in the past.

A lot of this is down to the shaft choice which is in the 50 to 60 gram region. This is where most drivers have gone in the search for distance and Titleist has followed suit, but with a twist.

In the shafts that are under 60g, so the Kuro Kage and the Tensei, Titleist shaft engineers asked Mitsubishi to put a tungsten weight in the shaft under the bottom of the grip to add stability and of course we need a three word tech for this so it is called Straight Flight Weighting.

This adds the feel of a little extra weight back into the club as well as helping the stability and I think it is an excellent touch.

Given where Titleist were coming from with 917, it is maybe not a surprise that TS is performing so much better and I feel a little bad saying that as 917 was very consistent. However now with TS they are back in the conversation for distance whilst continuing to have that consistency.

Compared to the fastest drivers I have tested to date, the TS was neck and neck with them so all the effort Titleist has put into revising their driver offering has paid off. The shape of both heads is modern but the sound, feel, colour and performance is all spot on and together with all the independent adjustable options for loft, lie and weight makes the TS2 and TS3 drivers a very complete offering.