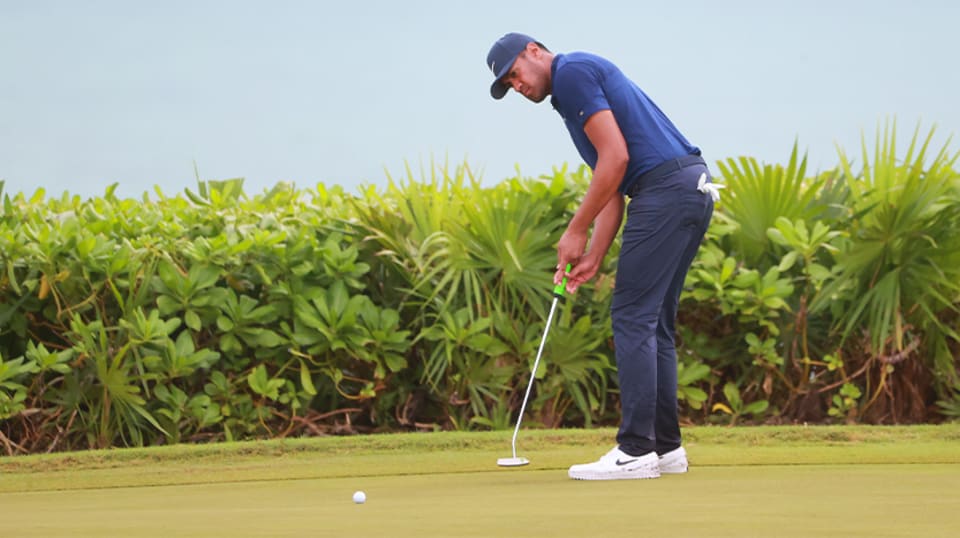 PLAYA DEL CARMEN, Mexico – During the 2020 FedExCup Playoffs, Tony Finau began “messing around” with a new shaft placement on his Piretti Elite putter, as a training aid to help combat a tendency of missing left on right-to-left putts.

Utilizing the same putter head, the shaft adjustment increases the loft from 3 to 4 degrees, with the shaft slightly back of the head.

This week, Finau decided to put the once-training aid into play, and it’s paying dividends.

Finau has opened the Mayakoba Golf Classic presented by UNIFIN in rounds of 67-66, sharing the lead at 9-under through the morning wave at El Camaleon GC.

The Utah native has hit just 22 of 36 greens in regulation – ranking in the back half of the field – but has moved into contention via up-and-down prowess, as well as maximizing birdie opportunities. He’s averaging 1.5 putts per green in regulation, and he has recorded just three bogeys through 36 holes.

“It’s always nice to see the ball go in,” said Finau after signing his scorecard early Friday afternoon. “I’ve had a lot of one-putts this week, and a lot of great par-saves. I think that’s been the story for me these first couple of days … I’m making birdies on the holes that I’m hitting it close, but whenever I’m missing the green or out of play, I’m getting it up by the green and I’m getting it up-and-down.

“So that’s extremely important if you want to stay in contention.”

Finau admits he is “no stranger to changing the putting grip or changing the putter,” and figured this week represented as good a time as any to change things up. The 31-year-old has recorded three top-five finishes since the Return to Golf in June, and is 4-for-4 in made cuts to begin the 2020-21 TOUR campaign, but said the putter “hadn’t felt great for the past couple of months.”

He entered the Mayakoba Golf Classic at No. 95 this season in Strokes Gained: Putting, and believed there was ample room for improvement.

“I think it’s a good thing and a good look for me,” said Finau. “I usually putt with a standard loft; this one has a little bit more. Same grip, but quite a different look.”

Finau has utilized his Piretti Elite putter head since 2017, and he has maintained a consistent presence on leaderboards in that span. He has finished sixth, seventh and 17th in the past three FedExCups, respectively.

But he’s still chasing his first TOUR title since the 2016 Puerto Rico Open.

With 40 top-10s on TOUR, the game is there. Sometimes the line between winning and a close call can be razor-thin.

A new look with the flat stick could prove the difference.

“I just felt like it was time for a change,” Finau said. “My body feels good, my game feels good. Anytime I’m putting it nicely, I think that’s always a great feeling.

“I know the putter felt good in my hand, and anytime it missed, it hit the hole, so that’s usually a good sign. I’ll definitely take that confidence going into the weekend.”