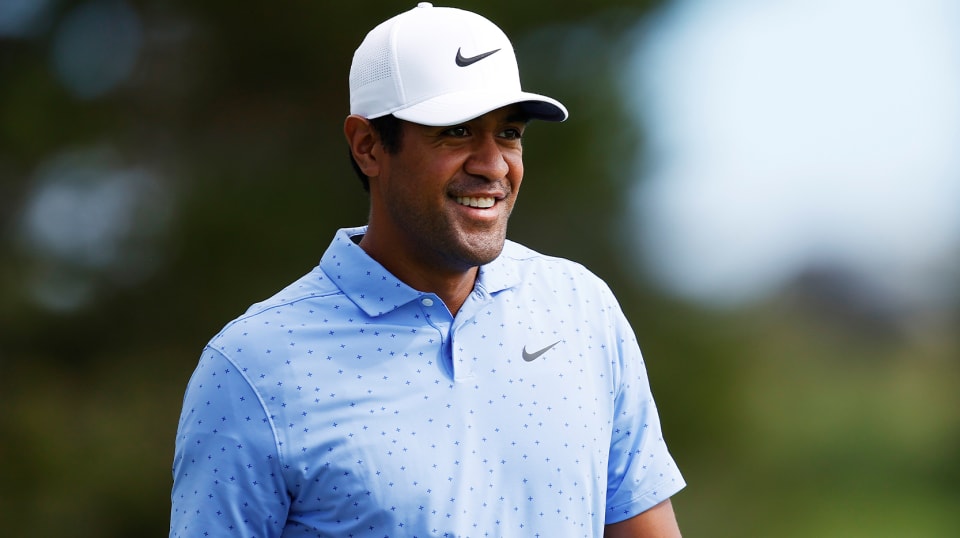 He knows because he has had the same thought, or the same question: When is the size of his trophy cabinet going to match up to the size of his talent? As he prepares for this week’s The American Express, where he shot a career-low 62 and finished T14 last year, all he can tell you is what anyone in his position would tell you: He’s working on it.

They know because Finau comes across as one of the nicest guys on TOUR, and it’s a short leap from there to too nice, which is adjacent to Finau just doesn’t want it bad enough.

“What I love about Tony is just how kind he is to everybody,” says Danny Ainge, Boston Celtics President of Basketball Operations and a friend of Finau’s since the latter was 14, when they met at Utah’s Thanksgiving Point Golf Club. “He’s so approachable and easy to be around whether you’re an 18 handicapper or just in the group to keep score. He’s one of the nicest guys I’ve met.

“But what I think a lot of people don’t understand is how deep-down competitive he is,” Ainge continues. “He works so hard at his game. He’s driven. He’s motivated. He wants it.”

At 31, Finau’s career earnings have recently surpassed $20 million, but good luck finding signs of complacency. He split with longtime caddie Greg Bodine last summer, and, inspired by Bryson DeChambeau, began experimenting with ball speed, reaching 206 mph. He has tinkered with putting and putters, studied the statistics. After finishing T38 at the Masters in November, he and his coach, Boyd Summerhays, took a hard look at why he’d felt unprepared.

“You can’t sugar-coat it,” says Summerhays, Director of Instruction at McDowell Mountain Golf Club in Scottsdale, Arizona. “The second one hasn’t come as quick as he or we thought, that’s just the truth, and it does build a bit, not winning for a few years. But he’s doing the right things. He’s determined. People would be surprised how much it means to him, how bad he wants it.”

Pull back a bit, and we should all have such problems as Tony Finau. The first-ever TOUR pro of Samoan and Tongan descent, he has gone from the fringes (Golf Channel’s largely forgotten “Big Break Disney” in 2009) to a top-20 player in the world. He made his fourth straight TOUR Championship last season, and has a big, beautiful and growing family (four kids).

He’s also well-liked. Brooks Koepka, with whom Finau partnered to go 1-1 at the otherwise disastrous 2018 Ryder Cup in France, couldn’t say enough nice things about him, and they had discussed getting the band back together again for the 2019 Presidents Cup at Royal Melbourne until Koepka pulled out with an injury. (Finau boosted the U.S. Team with three crucial ties and went 0-1-3.) Fans love him. He’s a cut-up on Instagram.

All of which made last season’s Waste Management Phoenix Open so gut-wrenching. Finau, who had just moved his family to Scottsdale (they go back and forth between there and Utah), birdied 12 and 13, playing partner Webb Simpson bogeyed 15, and it felt like Finau’s time. And then it all changed. He missed two birdie putts inside 10 feet. At the par-4 17th hole, where TOUR players can reach the green with a 3-wood, he fanned his tee shot into the brutal, no-go fairway bunker, and did well to make par.

Meanwhile, Simpson birdied 17 and 18 to force a playoff, which he won with a birdie. He called the result “hard” and slightly bittersweet. “I hope he doesn’t feel bad about today because he played great,” he said of his Presidents Cup teammate. Jraice, Finau’s oldest boy, sobbed just off the 18th green. “This one is going to hurt,” Summerhays said. Ever the gentleman, Finau congratulated the winner and gathered his crew to go home and watch a quiet Super Bowl.

He was T3 in the 3M Open in July, three shots behind winner Michael Thompson, after shooting 68 on a low-scoring day at TPC Twin Cities. And Finau finished fourth in the PGA Championship. He has seven top-10s in the last 11 majors.