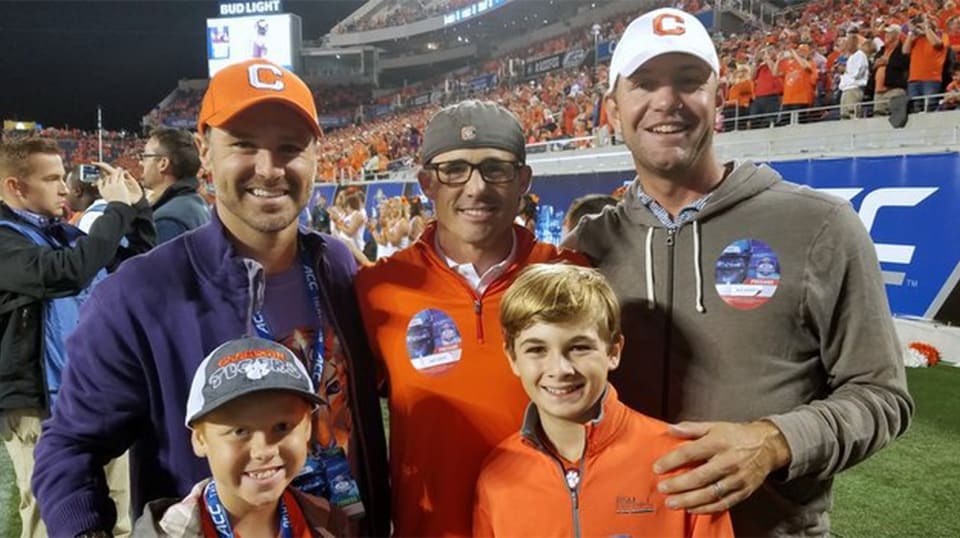 “Whereas the system in the U.S. — it’s a fantastic system,
but it’s just totally different because sport is just so massive here
and it’s just so successful. … People are so vested in it because they
all went to their different schools. They become fans for life. …

“But he found it so interesting that I didn’t follow college football. He was like, well, I’ve got a team for you to support.”

Swinney
became the Tigers’ interim head coach in October of 2008 when Terry
Bowden resigned, then had the interim removed from his title two months
later as Clemson prepared for a Gator Bowl date with Nebraska. Immelman
was buoyed by his new friend’s success.

“When I first met him and
his boys and his wife, they have this infectious enthusiasm and
personality, all of them,” Immelman says. “And it was exactly like my
friend Rich said to me — immediately we just had stuff in common. We
saw things a similar way. …

“And I was kind of at the height of
me playing and being like right in the trenches, trying to try to
compete as well. And so, it was just such cool timing to then see him
take this step and then see him, I guess, survive through that period
where he was the interim coach and get hired full time.”

Swinney,
for his part, was struck by what a competitor Immelman was. He remembers
watching the College World Series with the South African during that
first fishing trip.

“He was just sitting there, and I don’t know
if he knows a lot about baseball or not,” Swinney recalls. “They were
changing pitchers and the way the pitcher came in, the demeanor of the
pitcher, it really bothered him. And he was just like, well, there’s no
way this team’s winning. …

“And of course, that turned out to be
the case. He’s a great competitor and a fun guy. … And it’s just
pretty cool that he chose the Tigers to be his team.”

Swinney even
asked Immelman, who will captain the Internationals at the 2022
Presidents Cup, to speak to the Clemson football team prior to the 2014
Russell Athletic Bowl in Orlando where the Tigers put a 40-6 whipping on
Oklahoma.

“He understands competition at a high level and the
type of mindset that you have to have,” Swinney explains. “You don’t win
the Masters and stare down Tiger and all of them, and that drive down
that 18th fairway and all of that pressure, if you don’t have mental
toughness and a certain mindset and focus.

“Those things translate
to any competitive situation, whether it be football or whatever. But
you know, he knows a lot about football. He’s become a very astute fan
and knowledgeable.”

Immelman was quick to point out that his
speech was “nothing Rudy-like.” He and his son Jake had been watching
practice and “Coach called me in,” the two-time PGA TOUR champion
remembered.

“It was basically me telling them how much I love
watching them and how inspiring it is to watch them,” Immelman says.
“And having the opportunities that they have to play in big games like
that is something that they’ll remember forever and 20, 30, 40 years
from now, they’re going to look back on those times fondly. So, give it
your best. Don’t leave anything out there.

“It’s been a lot of fun
for us as a family to just to feel like you’re a tiny little part and a
fan of the program and just to see the success they’ve had.”

While
its September date conflicts with football, Immelman would love to have
Swinney give his International Team a pep talk during the Presidents
Cup. Clemson, South Carolina, is only a couple of hours from Charlotte,
where the biennial event is being played at Quail Hollow Club.

At
the same time, though, Immelman says he would need to figure out how
many players on his diverse team understand American football. Even so,
he’s thinks he’s learned a lot from the way Swinney “shepherds” his
team, which Immelman calls a “gift,” that will help him prepare for the
Presidents Cup.