ORLANDO, Fla. – Here are some things I think that I think after watching Tiger Woods scramble his way to an even-par 72 Friday at Bay Hill.

• A ball-striking clinic, this was not. Woods admitted as much in his post-round media circus. Let’s start with a self-assessment: “Today was a hard fight,” he said. “It was a grind. It wasn’t sharp, but I hung in there and just kept grinding away and chipped away at the golf course. I didn’t hit the ball close. I didn’t hit the ball well. But I was just hanging in there, hanging in there and just trying not to shoot myself out of the tournament. I thought something in the red would be great and I just wasn’t quite able to do it, but came close.” Final counts for Tiger: 8 of 14 fairways, 10 of 18 greens, 27 putts.

• He is right, by the way. He did come close. If not for lipped birdie putts at Nos. 8 and 18 – and if not for an unofficial three-jack at No. 9 (more on this in a minute) – Woods really would have made chicken salad in Round 2. The lip-out on 18, though disappointing, was at least a proper thematic close to his day. The only birdies he made were via two-putts on a pair of par-5s. Why roll one in on the last hole? It was discouraging to watch his ball-striking regress, but encouraging to see him fight back to even par with two back-nine birdies. Friday was a decidedly mixed bag.

• The driver remains an issue, and luckily for him, Bay Hill is playing firm enough that he doesn’t need it. Tiger took Frank off his driver just five times on Friday, when he nearly went OB-right at 4, when he found the right-hand bunker at 6, when he held onto the edge of the fairway with a squeeze cut at 9, when he piped one at 12, and when he missed – you guessed it – way right at 16. Friday featured a healthy diet of 2-irons off the tee and a smoked 3-wood on his final hole. If Bay Hill wasn’t so dry, he wouldn’t be as able to avoid the big club.

• But, hey, he was encouraged by all that lag-putting his shoddy ball-striking necessitated. “The only thing that I felt really good with was my putter,” he said. “Even though I blew it off the green on 9, I hit a beautiful second putt and the putter was releasing and flowing, really felt good. But I just couldn’t get to the green fast enough.” As we all know, nothing excites the masses like efficient lag-putting.

• Yeah, let’s talk about No. 9. His dropped shot there qualifies as perhaps the most bizarre bogey of his most recent comeback. Just 150 yards from the hole after a 313-yard drive, Woods pulled a short iron a whopping 60 feet left of the right-hand pin. He then proceeded to putt off the green. His birdie try – if you want to call it that – rolled 13 feet past the hole onto the apron. He missed the comebacker to turn in 2-over 38, sandwiching opening and closing bogeys around seven consecutive pars on his front nine.

• Speaking of that opening bogey, Woods started his round with a duck-hooked 2-iron into the left trees. The ball only went 192 yards, which is probably a good thing – any farther on that line without whacking a tree and Tiger would have been back on the tee hitting three. Instead, he was chipping out in record time and playing his third shot before Jason Day and Hideki Matsuyama had reached their drives.

• One interesting note that will get lost in the shuffle the second you’re done reading this – assuming you’ve made it down this far – Tiger admitted Friday that he only reason he played Valspar was because he “missed the cut in L.A. and only got two rounds in.” So, had Tiger finished T-30 at Riviera, we wouldn’t have gotten last week’s T-2 at Innisbrook. 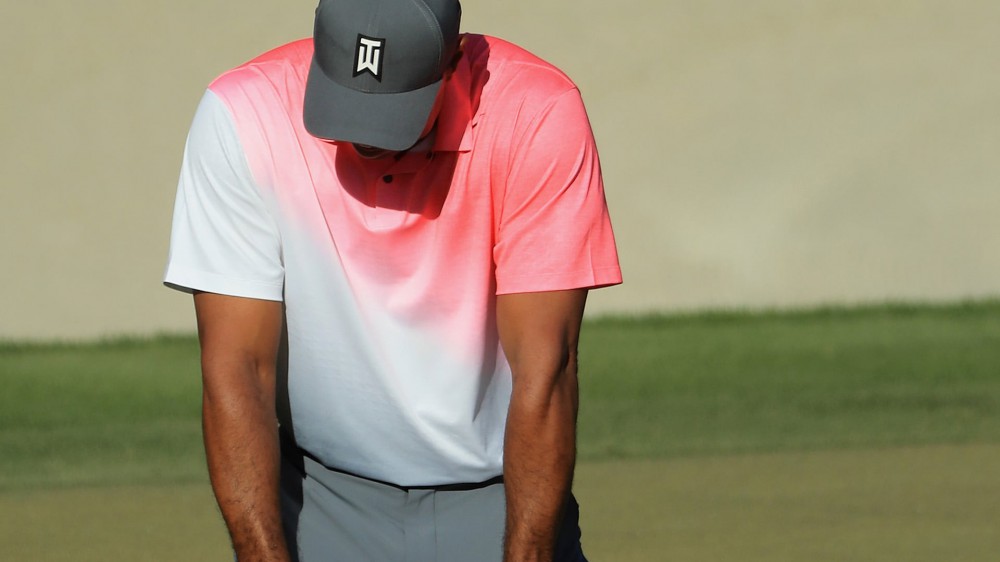 Full final-round tee times for Sunday at The Players