TT postscript: So, what happened on 16?

ATLANTA – It looked like Tiger Woods might finish the day a couple off the lead. Then it looked like he’d be a couple ahead. In the end, he shares the 36-hole lead at the Tour Championship with Justin Rose. All things considered, seems about right. Here are some things to know as we head to the weekend.

• It was a rock concert on Friday at East Lake when Tiger made a 24-footer for birdie at the par-3 15th. People in Buckhead had to hear the roars. It was his third birdie in four holes and he was looking good for a multiple-shot lead by day’s end. And then came the double bogey at 16. We’ll get to that later, but what happened at 15 today was just a snippet of what we will see if he does something similar on Saturday or Sunday.

• OK, 16. With all that momentum, Tiger pulled his tee shot into the trees. He then got too aggressive and tried to – at worst – hit his second shot into the greenside bunker. Only, he didn’t. He hit it into the bunker fronting that bunker. Four strokes later he went from 2 up to tied. Here’s his explanation:

“I wasn’t quite sure I could carry that bunker with that lie I had. I only had a 168 [yards to the] front, but I had 130 cover on that bunker and tried to go up with a 9-iron. And it was between 9-iron and wedge, and I thought I could get enough on a 9-iron to get over that bunker and to have an angle to get back to that back left pin. In hindsight, I probably should have just pitched out and the worst I would make is 5, and with my wedge game right now, a pretty high percentage I would have got that up-and-down. But I thought I could sneak it up there and get up on the upslope and have a good angle in there, and it just didn’t work out.”

• Statistics time! Tiger admitted after his round on Friday that he “didn’t hit it very well overall today.” Certainly not as well as on Thursday. He missed three more fairways [seven of 14] and three more greens [11 of 18] than he did in Rd. 1. That added up to three more strokes on his scorecard [68 compared to an opening 65]. 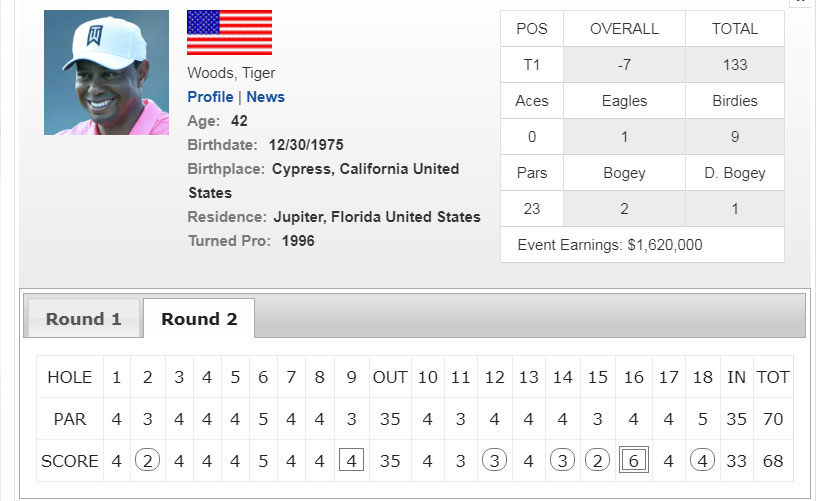 • This is the first time since the 2015 Wyndham Championship that Tiger has had at least a share of the 36-hole lead on Tour. How has he done in the past when playing from the midway pole position?

Tiger Woods is 37-for-48 converting 36-hole leads/co-leads in his PGA Tour career.

• Friday was similar to Thursday in a few ways. For one, it was stinky hot out there. For another, Woods got off to a slow start and quickly fired up on the back nine. For the second consecutive day, he kick-started a back-nine rally with a birdie at the 12th. And for the second consecutive day, he played the back nine in 4 under – well, he would have if not for that double bogey. Let’s just forget that one.

• This is the fourth round that Woods and Rose will have played together this year. They previously played the first two rounds at the Memorial and the third round at Bay Hill. Rose bettered Woods in each of those three rounds. Let’s forget those, too. Watch: Olesen not happy with ruling at BMW