AVONDALE, La. – Jordan Spieth and teammate Ryan Palmer won’t be around for the weekend at the Zurich Classic after Spieth shockingly put two balls in the water over the last two holes Friday.

Five shots off the lead heading into the closing stretch at TPC Louisiana, Spieth and Palmer finished with consecutive double bogeys to miss the cut by one.

“I had a couple of really bad swings,” Spieth said afterward. “I cost our team an opportunity, which really sucks given how hard we fought today. It’s not a good feeling. It’s much worse than if it’s just you.”

Spieth pulled 6-iron on the par-3 17th hole but his tee shot drifted short and left of the green, into the pond.

On 18, after Palmer left him 301 yards to the green, Spieth tried to launch a 4-iron – a club that could have reached a bunker short of the green – in an attempt to make up for his error on the previous hole. It, too, found the water.

Palmer’s fourth shot buried in the greenside bunker, Spieth couldn’t get his fifth on the green, and they walked off with a double-bogey 7 after Spieth rolled in a 20-footer. They shot 74 in the alternate-shot format.

It was their short-game heroics that even kept them in the hunt. Palmer played several delicate shots around the green, while Spieth hit a bold flop shot on 13 to tap-in range, then a deft bump-and-run from right of 15 green to save par. As Spieth walked up to the green, Jon Rahm said: “I don’t know whether to be amazed or annoyed at this point.”

But on the last two holes, Spieth was undone by his long game.

“I struggled with my swing both days,” he said. “Just didn’t hit the ball well at all. We held it together for a while and then it finally just came out. Unfortunately, all we needed was two more swings. That’s how it works, I guess.” 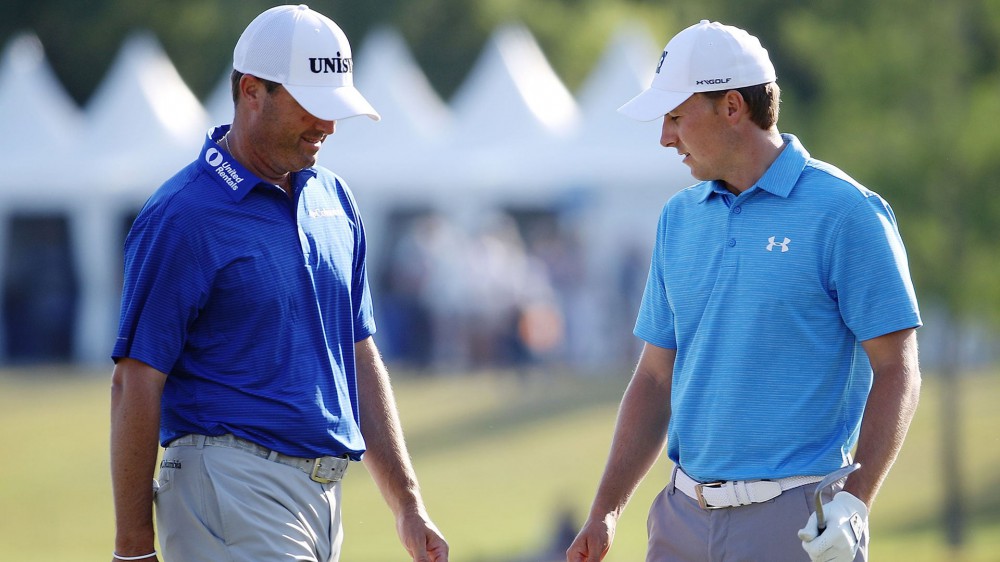 Mickelson moves into contention with 7-under 64