England and the United States swept their morning fourball matches to take control of their respective pools.

The English moved ahead of the Koreans in Pool A, setting up a head-to-head showdown in the third and final round of fourballs, which was scheduled for Friday afternoon.

The United States will be looking to win Pool B in a matchup with Thailand Friday afternoon.

The top two teams from each pool advance to Sunday singles, with the third-place teams in each pool going into a sudden-death fourball playoff to determine who will be the fifth team to make singles.

With heavy winds and rain from the outer bands of Typhoon Kong-Rey expected Saturday, it’s uncertain if the third-round matches that aren’t complete on Friday will be able to finish on Saturday.

The Swedes are proving a tough combination. Nordqvist and Hedwall are now 4-0-1 overall as a team in the International Crown, 7-1-1 as a team in Crowns and Solheim Cups combined. A day after starting with four birdies over the first five holes in a victory against Americans Michelle Wie and Jessica Korda, they were hot again. With birdies at the ninth, 10th and 11th holes Friday, they built a 5-up lead.

Japan birdied three of the first four holes to go 3 up and cruised without much a challenge the rest of the way. The Swedes struggled, winning just a single hole all morning.

Korda and Wie birdied three of the first seven holes to go 3 up and never looked back. A pair of big hitters, they overpowered their short-hitting competition, blowing drives past the Thais all day.

Thompson continues to shrink this course with her big drives, but her putter was the story Friday. She holed a 50-footer for birdie at the 10th to put the Americans 3 up. She also holed lenghty putts at the second and fourth to win those holes. Kerr gutted out a gritty performance playing sick with a sore throat. The American combo is now 10-1-2 in Solheim Cups and International Crowns.

Hull stuffed her tee shot to 6 feet at the 13th and made birdie to move England 1 up in a tight match. The duo will now move on to face the Koreans in the third round of fourballs.

Shadoff pitched in for birdie at the second to put England up, and when Law stuck her approach to 6 feet at the ninth, the match was almost decided. She holed the birdie to put the Brits 4 up. The English duo hasn’t trailed in their first two matches, neither of which has gone beyond the 15th hole. Shadoff is now 5-0-1 overall in Crown play.

Ryu holed four birdies on the front nine, and Chun nearly made a hole-in-one at the 13th to lead the early effort. Chun’s tee shot teased the hole at the 13th and ended up 2 feet past, to set up a birdie for an important half to keep a 3 up lead. Ryu sealed the deal with a 15-foot birdie at the 17th to clinch the match.

The Koreans bogeyed the first hole and trailed the entire match. Katherine Kirk holed a 15-foot birdie at the 15th to put the Aussies 3 up. The Koreans didn’t make a birdie until the 13th hole. 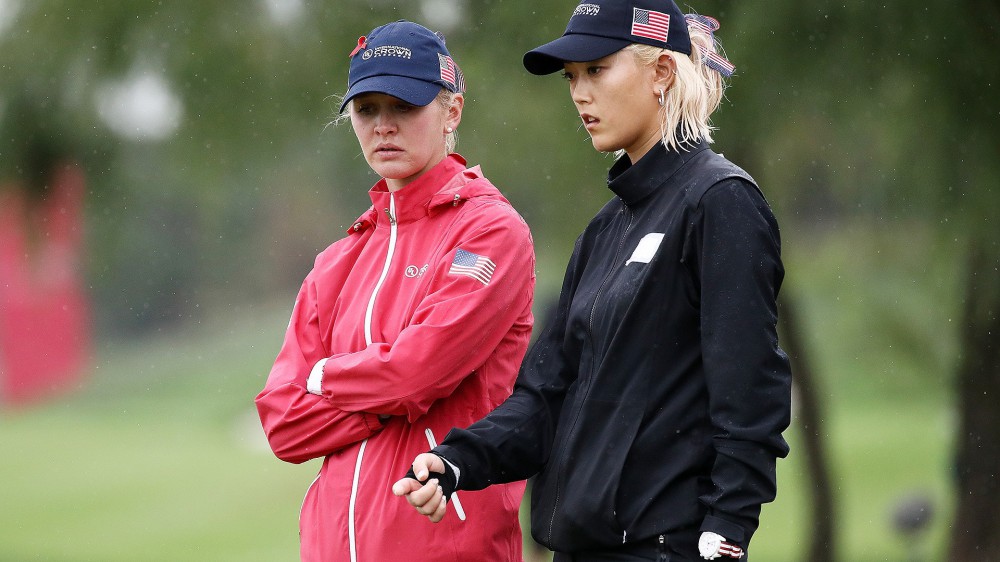