The Republic of Korea and the United States lived up to their top seedings and advanced to singles.

England and Sweden also advanced by virtue of finishing second in their respective pools, and Thailand won a wild-card playoff against Japan and Australia to advance as the fifth team in singles. Ariya Jutanugarn chipped in from 60 feet for eagle to win the playoff.

The Koreans were dominant finishing up fourballs Sunday morning, sweeping a gritty English team in a pair of easy victories to finish first in Pool A.

Americans Cristie Kerr and Lexi Thompson helped the Americans split their fourball matches with Japan Sunday morning. The duo improved its record to 11-1-2 as partners in Solheim Cup and International Crowns to finish first in Pool B.

* England won a tiebreaker with Australia for second place in Pool A play by virtue of its head-to-head record with the Aussies.

The Jutanugarn sisters, in their first pairing of the week, took down the formidable Swede team. With Sweden in control on the front nine, Moriya chipped in from 30 feet for birdie at the 9th to square the match. That excited Ariya, who clapped and giddily hopped like a cheerleader.

Lindberg and Sagstrom delivered their first points of the event in timely fashion, with the victory assuring the Swedes a spot in singles by virtue of a second-place finish in Pool B.

Uehara birdied the ninth to square the match and then the 11th to put Japan 1 up. They never trailed again, with the Americans struggling in the middle of the match, putting up bogeys at the ninth and 11th holes and making just one birdie over the final 10 holes.

The American dynamic duo improved their record to 11-1-2 as partners in Solheim Cups and International Crowns with a big comeback. They were 3 down after four holes but birdied three holes in a row upon their return Sunday morning to finish up the suspended third round.

The Aussies were down early, until Lee hit her tee shot to 3 feet at the fifth and made the birdie to square the match. The Aussies birdied the final two holes to win and advance to the wild-card playoff to see who will be the fifth team to make singles.

Oh and Kirk delivered their second victory of the week in a rout to give the Aussies a spot in the wild-card playoff for the final singles spot.

Park holed a monster putt at the 12th, sending a roar across Jack Nicklaus Golf Club. Her 70-foot birdie gave the Koreans a commanding 4 up lead.

The Koreans steamrolled England making birdies galore. They were 7 under through the first 13 holes with Ryu and Chun taking turns holing birdies. 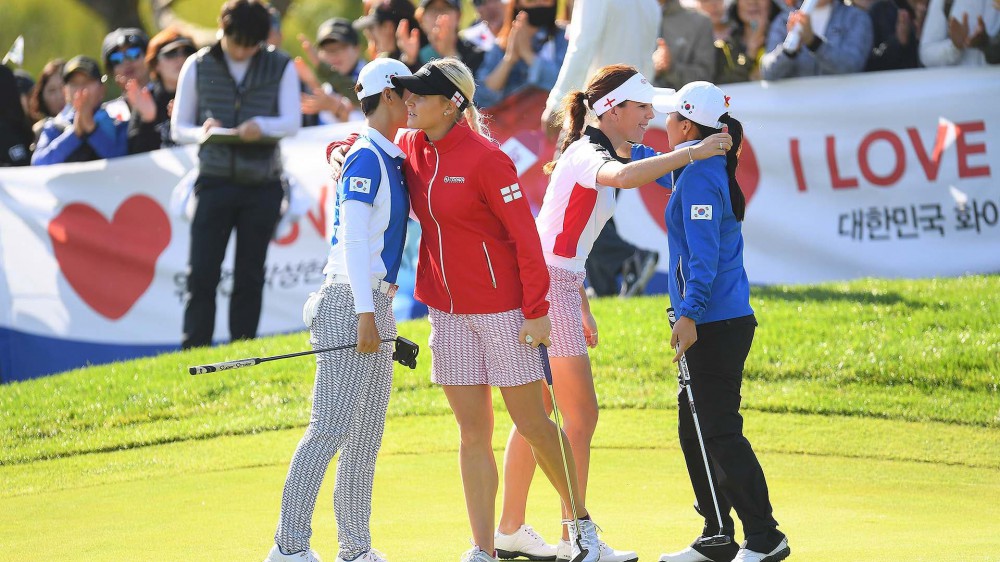