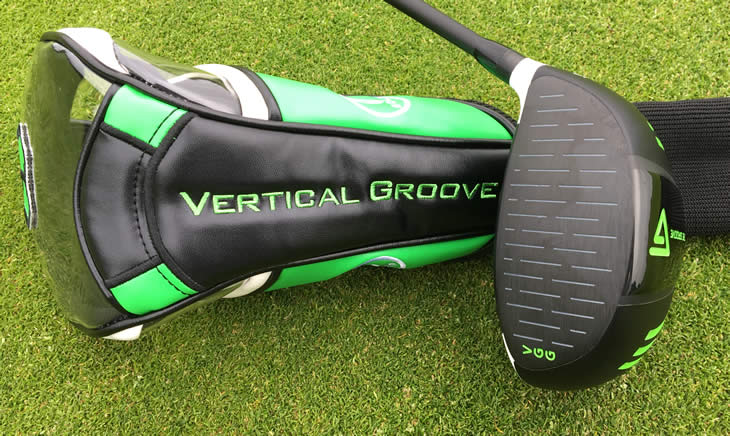 Vertical Groove Driver Review -In an era where some drivers don’t have any grooves on the face at all, not only does the Vertical Groove driver stand out by having them, but as the name suggests, they are positioned vertically instead of horizontally. 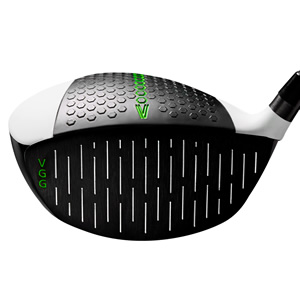 The makers claim this makes it straighter and logically the position of them seems to make sense, but there could be more to this than meets the eye.

The tall 450cc head is quite compact and the rounded sole looks like it has been puffed up with air and has a familiar look about it that I can’t place.

The look at address is very distinctive too, with a white crown featuring a large black oval section divided by a long green dotted alignment line.

The aim, if you excuse the pun, is to use these to point in the right direction and the green line of 11 hexagons leading up to the arrow at the front does the job very well.

You have to rely on this as with the face also being black, it is not possible to use the colour contrast of the face against the crown to line up using the face as a visual reference point and for some this could take a bit of getting used to.

The face looks like it has a decent about of bulge and roll on it and you can see the vertical grooves clearly too.

The crown also moves back quite steeply from the leading edge which is a subtle aerodynamic feature.

This combines with the rest of the hexagon dimples to allegedly improve airflow.

With my limited knowledge of laminar airflows I am not sure how much affect most of them will have so I am assuming much of it is cosmetic.

Whatever they have done the Vertical Groove Driver does sound and feel great at address with a lovely solid crunch from the titanium head.

The fixed quality Aldila NV2K shaft really helps here, even if it is a touch on the long side at 45.75 inches for a driver that is trying to be about accuracy.

But was it? Well, there’s no doubting it goes pretty straight, but compared to similarly priced drivers in the market it is difficult to say if there was a clear laser-like advantage.

The bulge and roll on the face seemed more noticeable on the Vertical Groove driver than other models, so maybe that combined with the groove pattern is keeping the ball more on line. However, the face is just part of the straightness equation that is very player dependent, so things like shaft, face loft, ball and launch conditions will all have an influence too.

Special mention must go to the see-through headcover which is easy to take on and off and looks good with the lime green flashes.

This is a driver that has a bit of a direct selling infomercial feel about it but comes with quite a premium price for a non-adjustable driver. However I have to say that the Vertical Groove driver does the job very well and could suit a wide range of handicaps. The looks are distinctive to say the least, but if you can get past them then you have a driver that sounds and feels the part and delivers good distance.