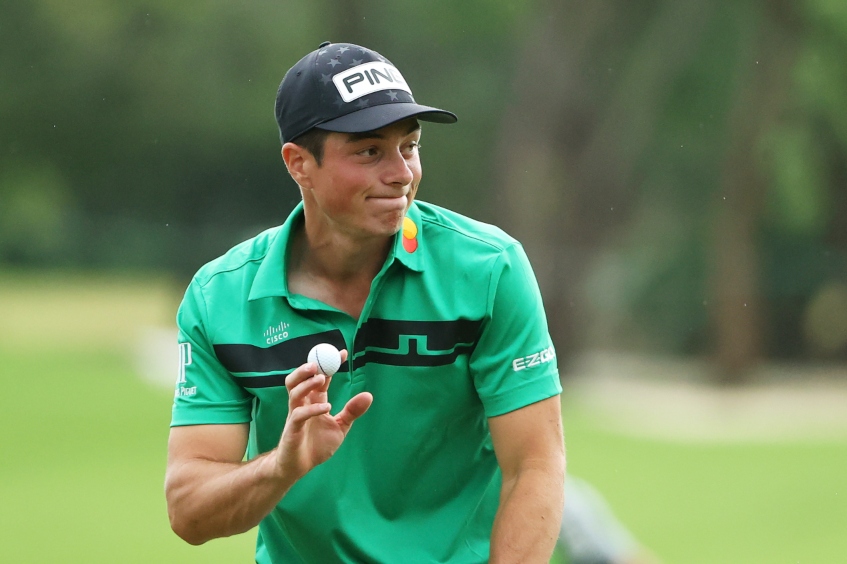 PLAYA DEL CARMEN, Mexico — Viktor Hovland says his nerves are a jangled mess when he gets into contention. It sure didn’t look that way at the Mayakoba Golf Classic presented by UNIFIN, where he captured another PGA TOUR title with another big putt at the end.

Hovland saved par with a splendid 40-yard save from a waste area on the 16th hole, and then he delivered the winner with a 12-foot birdie putt on the final hole to beat Aaron Wise and win for the second time this year.

It was the first time since the Mayakoba Classic began in 2007 that it was won with a birdie putt on the final hole. For the 23-year-old from Norway, it’s becoming old hat. Hovland won the Puerto Rico Open in February for his first PGA TOUR title by holing a 30-foot birdie putt on the last hole.

“I was shaking there at the end,” Hovland said after closing with a 6-under 65. “I thought I lost it after second shot on 16. I made an awesome par there. I knew I had to make birdie on 18.”

The former NCAA champion at Oregon also was going for his second PGA TOUR win, the first one coming at the AT&T Byron Nelson two years ago.

Hovland had four birdies in the opening six holes and built a two-shot lead going into the back nine on a course softened by rain that caused a two-hour delay in the morning.

But he made bogey on the 12th hole, and that seemed to create chances for a half-dozen players separated by one shot along the back nine.

Hovland responded with birdies on the next two holes, and he appeared to be in control with a tee shot to 4 feet on the par-3 15th. But he hit a tentative putt to remain tied with Wise, and Hovland thought he was in big trouble when his long iron on the 515-yard 16th hole sailed hard to the right toward trouble.

It came down in the waste area a few feet from the hazard, and he hit a superb sand shot to 4 feet to save par.

Hovland, starting his second season on the PGA TOUR after a stellar college career at Oklahoma State, finished at 20-under 264 and moved to third in the FedExCup standings.

Adam Long (67) and Tom Hoge (69) tied for third at 17-under 267. Hoge holed a 20-foot birdie putt from the fringe on the 15th hole to get within one shot, but he three-putted from some 70 feet on the tough 16th to fall back. Long lost hope when he sent his tee shot into the vegetation on the 17th hole and took bogey.

Emiliano Grillo, who led after the second and third rounds, closed with a 72 and tied for eighth, five shots behind. Justin Thomas got back to the fringe of contention with a 62 on Saturday, but followed that with a 69, making double bogey on No. 10 to end his chances.

This was the final official PGA TOUR event of the year, one last chance for players to either qualify for the Sentry Tournament of Champions at Kapalua or lock up a spot in the Masters next year. Neither was an issue for Hovland, who qualified for Maui with his win in Puerto Rico and was set for Augusta National by reaching the TOUR Championship his rookie season.

Austin Eckroat of Oklahoma State had a 67-65 weekend and tied for 12th.