Volvik V1 Laser Rangefinder Review – Despite having been first established in 1980, Volvik really came to prominence a few years ago as creators of multi-coloured performance golf balls that found their way into the bags of Tour Pros, including Bubba Watson and Carly Booth, before taking over the world of Long Drive. 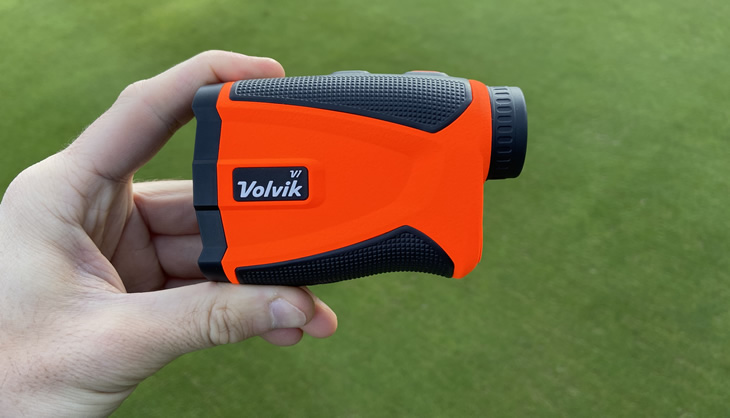 Having also developed a number of accessories including caps, sunglasses and bags, it has now made it’s first foray into the lucrative world of golf gadgetry with the release of it’s first laser rangefinder, aptly named V1.

The V1 features a Pin Finder function, where it is able to quickly and easy locate the flag so that the process doesn’t intrude with your overall pre-shot routine, and is accurate to within 1 yard for up to 1200 yards thanks to 6x magnification. A small disclaimer here – this means that an object like a building is measurable up to 1200 yards away.

For something smaller like a flag, you’re probably looking at around 400 yards. Although I doubt many of our readers will be hitting it that far!

The Slope Compensation mode, which has become commonplace among lasers in the last few years, provides adjusted yardages depending on elevation changes to stop you flying the green or coming up way short on undulating courses. This feature can also be switched off so that it is legal for competition use.

There’s also Priority First Goal technology which quickly and easily detects distances to objects in the forefront such as a bunker, and this is confirmed by a vibration so that you can be confident of your yardage when you step up to hit the shot.

18 holes at the fantastic Prestbury Golf Club was the perfect way to put this laser through its paces.

With plenty of blind shots, sloped fairways and hazards dotted everywhere, a laser is just what you need to make sure your course management is correct in order to avoid the danger. Here’s how I got on…

The rangefinder comes in three different colourways – all-black, orange and mint. I received the orange model and though it may not be the colour that I would’ve initially chosen, by the end of the test I quite liked it. With a price-point at £199 this is also a product which may attract junior golfers or newcomers to the game, and so the bold colourways could go down well with these people looking to stray away from traditional stuffy golf styling!

The design is simple but it looks pretty fun and the sturdy case it comes with is very smart too. From looks alone, if you saw this attached to somebody else’s bag you’d never know that it’s an ‘affordable’ rangefinder.

Considering that I play most of my golf casually with friends or whilst conducting tests like this, I almost always use a form of ‘slope mode’ whilst I play and to be honest, I really would miss not being able to use it. It’s one of those little features which appears pretty straightforward but actually can be very beneficial out on the course.

How many times do you hit a shot which is straight down the line of the flag, only to be disappointed when it comes up 10 yards short on the edge of the green?!

With the Slope Compensation mode on Volvik’s V1 this should be less frequent as you get quick and simple calculations on the screen. Once you’ve locked onto your target you get the standard yardage, and then a second later the ‘true’ playing distance pops up below it.

Not only is this useful during the round, it’s also a good thing to try and learn from too. It’ll help when you play in competitions, where you’re not allowed to use it, if you’ve remembered what the difference usually is on a certain tee shot or approach to a green.

The Priority First Goal appeared to work pretty well too. Whilst the initial description seemed pretty vague, once I got out on the course I found that the V1 did a good job of picking up objects including bunkers, trees and the flag with a nice little buzz to indicate that you’d found your target.

Throughout the test I was actually impressed that the rangefinder generally did a good job of finding the objects in the foreground too, rather than just getting a hedge behind the green which can often be the case and does get a little annoying. You want to be confident that you’ve got the right yardage and I definitely trusted the V1 to be providing an accurate reading.

In terms of ease of use, this was about as good as it gets. Its compact size means that it can easily be slipped into your pocket between measurements without it feeling bulky.

At 125 grams, it’s not quite as lightweight or as small as the GolfBuddy aim L10V Rangefinder which I tested earlier this year, but is much more compact than a Bushnell Pro XE for example. If you use a trolley or buggy then a larger model probably wouldn’t bother you as much, but I usually carry my bag so I don’t really want any excess weight or bulk if I can avoid it.

There’s just two main buttons to get the V1 up and running. The power on button is also used to measure your yardage. Simply ensure your target is in the crosshairs on the viewfinder, press the red button and the number should appear on the screen.

The ‘M’ button stands for mode and this is used to toggle the Slope feature on and off, as well as choosing whether you want the Pin Finder and Vibrate functions in operation too.

One issue I did find was that the screen was not always that easy to read, especially when there’s low light or when shooting directly towards the sun. Whilst this is a common issue among laser like this, perhaps changing the colour of the text may make it slightly easier to make out.

Little features like a proper shell carry case with a zip, bungee cord fastener and carabiner clip give this a reasonably premium feel. I also found that the rubber panels on the top and bottom of the device were comfortable and great for grip too – no worries about this slipping out of your hand onto the floor in the rain.

In terms of operation, it was similar to the GolfBuddy aim L10 V which we really liked – but also came in an impressive £100 cheaper.

It didn’t quite have the speed and premium feel of the Bushnell Pro XE, but it is half the price, and I don’t think the Bushnell is twice as good!

If you want a simple, compact, and affordable rangefinder then this is as good as you’ll get.

If this had a Bushnell logo on the side and they were marketing it as their budget option, golfers would be queuing up to get their hands on one.

Decent looks, good features, premium quality, easy to use – this is the ideal first laser for someone getting into the game as well as a great present idea due to the reasonable price tag.

Definitely. As I mentioned before I think the Slope feature is verging on a must-have for me when it comes to rangefinders. This is one the most simple and compact out there, has the slope feature, and is a great price.

If I was looking for a new laser it would definitely be on my Christmas list, and should be on yours too.