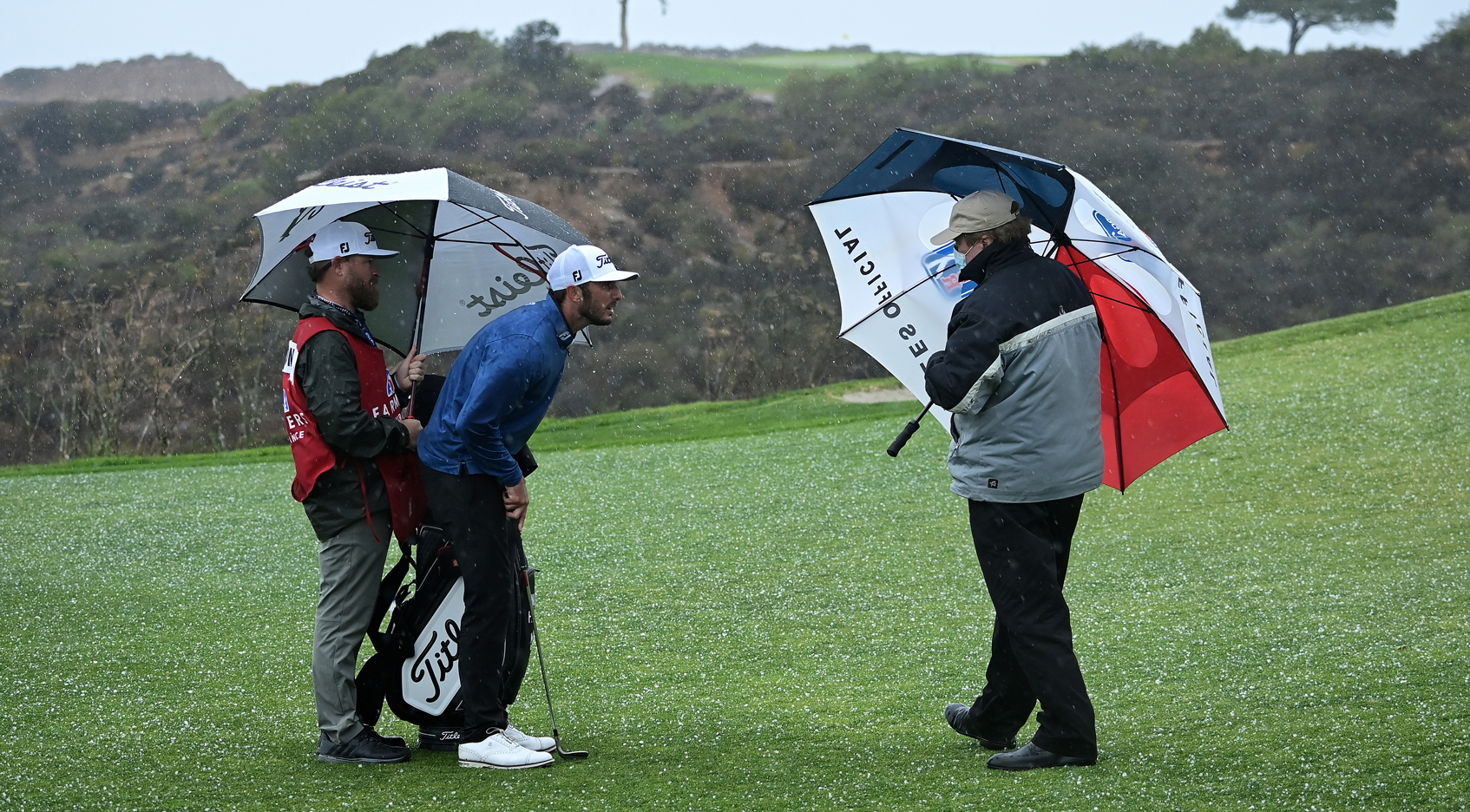 SAN DIEGO – Rain, hail and shine. And add wind too. Torrey Pines showcased it all in Friday’s second round of the Farmers Insurance Open.

When Lanto Griffin buried a 15-foot eagle putt to take the outright lead late in his round, the sun was trying to break through some scattered cloud around the cliffs of the iconic coastal venue.

Twenty minutes later he was trying to pick pieces of hail off the par-3 8th green that were interfering with his line and as such could be forgiven for a three-putt that saw him drop a shot.

Schizophrenic weather conditions certainly played their part as Viktor Hovland – a Norwegian who is used to the cold – forged his way to the 36-hole lead in “sunny” Southern California.

Initial forecasts had set a bleak tone for Friday’s second round, but heavy overnight rain actually let up at sunrise. Play began as scheduled with bright sunshine and picturesque views of the Pacific Ocean with hang gliders soaring overhead.

But while there was some sun, there was no warmth, as temperatures settled in the low 50s. And as play continued the winds started to lift and squalls found their way onto the course, particularly the coastal adjacent holes.

“The last couple weeks I’ve been in Oklahoma and it’s been really cold, so I’ve had probably three, four layers on practicing and I think that’s helped me for this week,” the young Hovland said with his now trademark wide grin after he capped off a brilliant 7-under 65 on the tougher South Course.

“It got really cold and obviously raining and hail, so being Norwegian, I think that also helps.”

Coupled with his 2-under 70 from Thursday on the North Course, Hovland sits out front at 9-under par. But there are a bevy of big names ready for a weekend chase after they also survived the wacky weather. Griffin is one of those at 8-under (66-70).

Australian Adam Scott – at home amongst the eucalyptus trees but certainly not in the chilly temps – ripped his 9-iron hard into the breeze from 136 yards on the par-4 2nd hole. It only went 125 yards and spun back off the green such was the power of the mini storm he encountered during that portion of his 3-under 69 on the South that also had him at 8-under.

“The wind wasn’t violent, but the temperature going down just makes that wind so heavy and the ball goes so short. It’s really hard to adjust perfectly to that on the fly,” Scott said as he looks to go one better than his only other Farmers Insurance Open appearance – a runner up in 2019. He found himself humming the Australian classic song – Four Seasons in One Day – by Crowded House at times.

“You’ve already played nine holes, then the temperature drops and all of a sudden trying to gauge that a 9‑iron’s only going to go 125 is a hard call to make. You’re just doing your best and trying not to make a big error, but it’s hard to all of a sudden see that the ball’s going 30 yards shorter than normal.”

When Jordan Spieth tried to line up his putt on the 17th hole caddie Michael Greller huddled over him with an umbrella to deflect the hail, and seemingly get as close to another body as possible for some warmth.

After making eagle on the par-5 6th early in his round Spieth was in good shape to buck the trend of poor results he’s suffered of late. But as things got tougher, he started to leak shots. When he returned after a near one hour suspension of play, he faced needing to birdie the par-5 18th to make the weekend. But par was all he could muster.

His Texan buddy Ryan Palmer had no such trouble. For the fourth year running Palmer set himself up through 36 holes. He led at this stage in 2018 and 2020, was T3 in 2019 and T2 this week. Now he needs to arrest the trend that has seen him fade on weekends at the venue.

“It was beautiful this morning, I couldn’t believe it when we got out here,” Palmer said. “The first five, six holes we had to go out and try to get something going … then I realized you could feel the winds coming up, you could see the rain out in the distance, and I knew it was going to get tougher and tougher, so I just kind of told myself, let’s just stay steady and shoot a couple under par and we’ll be in a good position.”

Palmer’s mate Jon Rahm – with whom he combined to win the Zurich Classic of New Orleans in 2019 – joined him at 8-under after also getting the benefit of playing the easier North Course Friday. He wasn’t a fan of getting hit by sideways stinging rain at times.

“Those fairways are narrow enough as it is. When you start adding the side wind, it’s just not fun. I can’t really stress how hard it can get,” Rahm said after a 67. “North is easier. South today is brutal, I mean absolutely brutal. Every shot counts out there. Even being on the fairway some shots are not easy and with this wind and rain coming in and out, for those who played the North today, we should feel really fortunate.”

Fortune, they say, favors the brave. Robby Shelton was brave. He played without extra layers. A jacket-free 8-under 64 on the North featured nine birdies and puts the two-time Korn Ferry Tour winning 25-year-old just two shots back.

“I just don’t swing well in a jacket. I tried to stay a little freer today even though I was a little cold, but I was fine.”

Lucky for him the sun is set to return for a weekend shootout.