PONTE VEDRA BEACH, Fla. – The move back to March for The Players brings some new and interesting things to watch for from home. Here’s a rundown of course changes, strategic moments and what to keep an eye on at the Pete Dye-designed TPC Sawgrass Stadium Course.

1. Lush green colors. The move from May makes all the difference with southern grasses and means the championship will be played on overseeded ryegrass rather than on indigenous Bermuda grass – the prevailing playing surface when the event was played from 2007-2018.  The emerald green course looks lusher than the previous Bermuda grass and entails more consistent density throughout the course.

The rough cut at 2 ½ inches isn’t overly punitive, but the combination of wet weather and the need to keep the ryegrass watered means the course will be lusher, softer and more forgiving than before. The course will play much longer, though will also be more receptive. That means more drives will stay in the fairway and more approach shots will stay on greens.

2. Cooler, windier weather. The shift in season, from mid-spring to late winter, also brings cooler temperatures and more volatile wind conditions. That means the ball won’t travel as far in the air, and players will be dealing with tougher weather. That’s especially the case as the forecast calls for the winds swinging from the north/northeast the first two days to westerly and southern winds on the weekend. With three par-5s (Nos. 2, 11 and 16) playing in a southerly orientation, that means more birdie opportunities early and more trouble at the end, with the 17th and 18th holes playing straight into the breeze.

3. Drivable par-4 12th hole. At 302 yards, this slight dogleg left should be within reach off the tee for many in the field. Since the current version of the hole debuted in 2017, players have been reluctant to go for the green because a steep slope left of the perched putting surface fed balls directly into a lateral pond. Tired of watching nearly every player lay up short left, course officials this year introduced a saving buffer alongside the water in the form of a thin strip of heavy rough. It’s enough of a collar to keep balls that run along the ground from tumbling into the hazard. Drives that land on the side slope will still kick in, but the small margin of support introduced this year will give more players the confidence to play boldly off the tee with a driver.

4. Mind games. A characteristic of the golf course is the way Dye’s design wreaks havoc with the most fragile piece of equipment in any PGA Tour player’s golf bag – his brain.

Two examples: On the 558-yard, par-5 11th hole, the shortest path to the green involves play down the left side, alongside and across a huge side bunker on the inside left. It’s a hard angle to discern off the tee, one made more difficult because a gentle slope to the left in the fairway steers the ground roll toward the sand.

At the famous 137-yard, par-3 17th hole, Dye extended the right side of the green beyond a front pot bunker so players are viewing that section of the putting surface. It makes the water even more obvious as a threat, never more so than on Sunday, when the traditional hole location (way back right) means a player seeking a close iron shot has to start the ball to the right over the water. Add the wind and the shot becomes far more vexing than is normally the case when hitting a short iron to a 4,100 square foot green.

All of this makes for a more diverse, more interesting golf course than was the case when the event was held in May for the past dozen years. 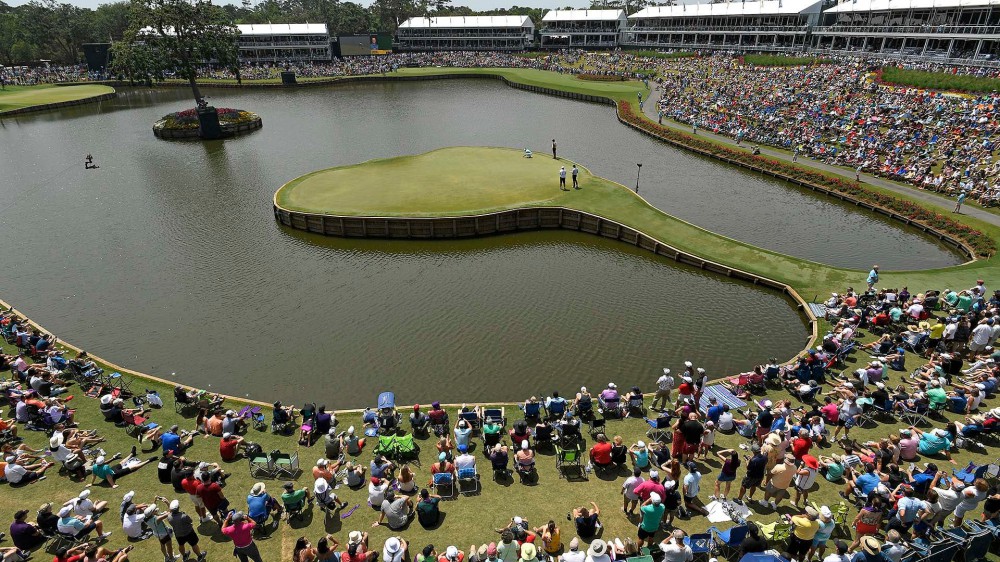