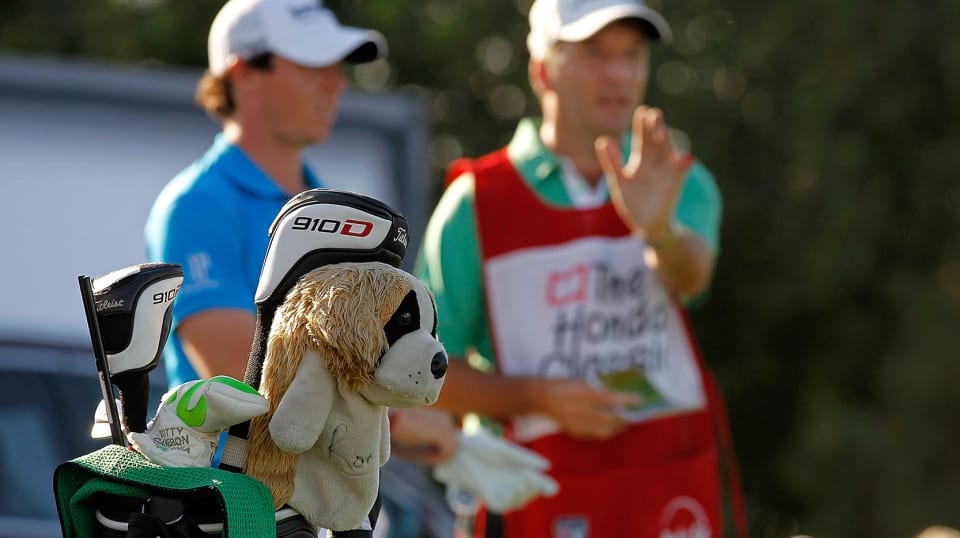 Speaking on the threat of Woods on the final day, McIlroy said after his round:

“I wasn’t really paying much attention until he made that eagle on 18. I heard the huge roar and it definitely wasn’t a birdie roar. That’s when I knew that he probably got to 10 (under).”

With his lead down to just one, McIlroy made a crucial birdie on the 13th when he spun his lob wedge from 92 yards back to 6 feet before holing the slippery putt to restore his lead to two.

“That putt was very important.” McIlroy would say following his round.

On the perilous 14th hole, McIlroy found trouble when he missed the green to the right, leaving himself in the gnarly rough. But he was once again able to extricate himself out of a tricky spot, deftly using his 60-degree wedge to chip to 4 feet for par which he swiftly dispatched into the back of the cup.

Having made safe pars on Nos. 15 and 16, the Ulsterman made his way to the par-3 17th hole, where he found the greenside bunker.

With a splash of the sand, McIlroy left himself another 4-footer for par and showed no nerves at all as he poured in the putt which gave him a two-stroke advantage heading to the par-5 18th.

A final par delivered a two-stroke victory for McIlroy, who afterwards credited his short game for holding off a surging Woods on the last day.

“First and foremost, it’s great to win this tournament, it’s got a long history. It was tough today especially seeing Tiger make a charge. I knew par golf would probably be good enough and that’s what I was trying to do. My short game felt great all week and definitely saved me a few times today.”

The Honda Classic was the third PGA TOUR victory of McIlroy’s career, who has gone on to win 18 times on TOUR. Since rising to the top of the sport that week in 2012, McIlroy has spent a total of 106 weeks holding the No. 1 ranking, the fourth-most in history behind Tiger Woods, Greg Norman and Dustin Johnson.

From an equipment standpoint, McIlroy didn’t ink his equipment an apparel deal with Nike until 2013. In 2012, he was a full-bag Titleist man—as was the case for his career up to that point.

There are similarities to his current TaylorMade set-up, including the dual fairway wood setup, and similar shaft weights and flexes, but there are also some interesting differences.

Now, McIlroy plays a set-matched TaylorMade P7MB pitching wedge, whereas in 2012, he used a “proper wedge”—a 46-degree Vokey. Interestingly, McIlroy has played a high MOI mallet for the better part of the past few seasons, but he recently switched to a TaylorMade Juno putter, which is similar in shape to the Scotty Cameron Newport GSS prototype he won with in 2012.

What was in McIlroy’s bag?