INCHEON, South Korea – The American team is enduring as a battered bunch.

Michelle Wie and Jessica Korda look as if they’re being held together by tape.

They both have wrist or hand injuries, and now Cristie Kerr has come down with an illness.

Still, the Americans kept themselves in the thick of the UL International Crown’s Pool B play splitting their fourball matches. Their two points is one less than front running Thailand, who they will meet on Friday.

While Thompson and Kerr battled to defeat Sweden’s Pernilla Lindberg and Madelene Sagstrom, 2 up, Wie and Korda came up short in a spirited comeback bid.

“They got off to a really hot start,” Korda said. “If Anna wasn’t making a birdie, Caroline was.”

Nordqvist and Hedwall birdied four of the first five holes to race 4 up, but Wie and Korda mounted a rally to square the match with Wie’s 18-foot birdie at the 13th.

Nordqvist answered Wie with a birdie at the 14th. She drove the short par 4 and two putted from 20 feet. The Swedes never let the Americans back in.

It was Wie’s first start in two months, since withdrawing from the first round of the Ricoh Women’s British Open with a right-hand injury.

“It felt pretty good,” Wie said. “There were a couple lies out there that weren’t ideal.”

Korda has her own wrist issues. She’s taped up, too. She has been playing through some pain since hurting her wrists on the hard surfaces of the Ricoh Women’s British Open. 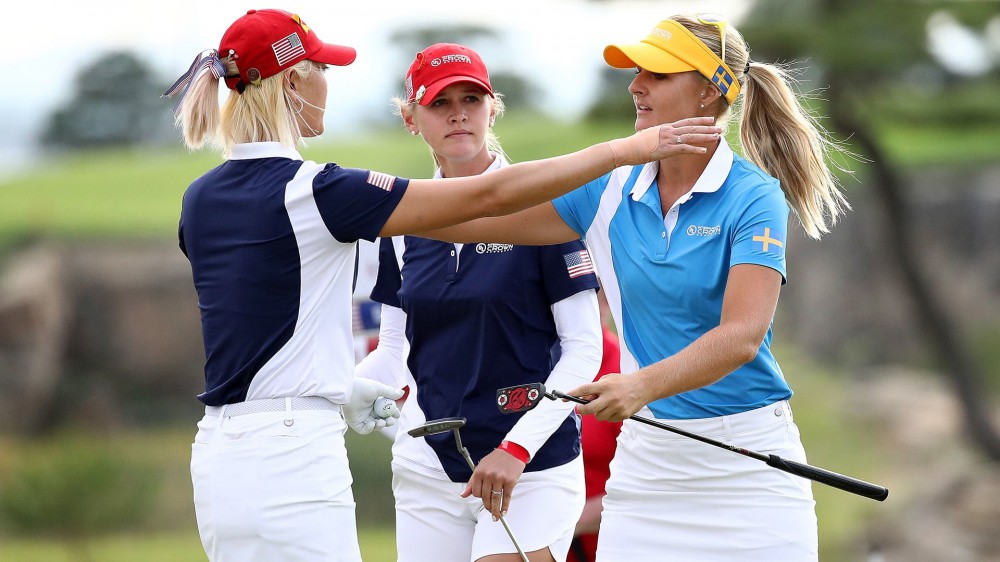