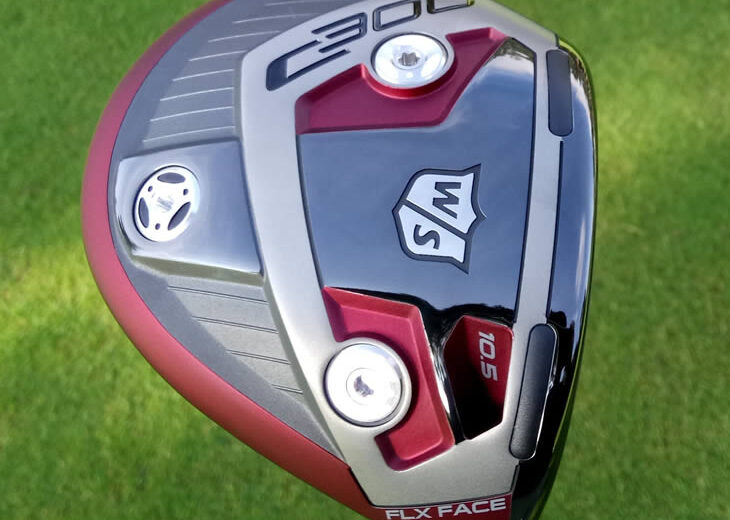 This in itself seems a bit unusual for the brand as most people may associate Wilson Staff more recently with game improvement, mid handicap clubs, but they are the brand with the most iron wins at majors so maybe it should not be a surprise.

Possibly this feeling comes from the Wilson Staff C200 irons that were definitely more game improvement last time around.

Based on their success Wilson has expanded their C range to the woods this year and developed the Power Holes design that made the C200 irons so distinctive.

The two Power Holes on the crown and sole of the driver are filled with TE031 Urethane and the idea is to allow the face to flex more towards the heel and toe of the club where they are located. No prizes for guessing the TWT (Three Word Tech) for this – yes it’s FLX Face Technology.

You could say that the two Power Holes are there to frame the ball at address, but that’s pushing it and it does have hints of the Snake Eyes or the Bridgestone JGR driver about it.

Wilson say that this makes the face deflection greater in the heel and toe than in the centre and combined with a thinner face towards the edges, should keep the ball speed up.

If you ignore the holes, the C300 driver looks quite classy with a dark matt red finish contrasting subtly with the black face. It’s quite a rounded pear shape with a slight toe bias which should give it a neutral set up.

It is quite an ‘upright’ face for a the driver and the tall toe gives the impression of quite a sharp face, even here with the 10.5° head.

There is plenty of adjustability too with an adjustable hosel that enables you to adjust it down 1° or up 2° plus all half degree points in between with the exception of +0.5° for some reason.

Sometimes the hosel doesn’t change launch much, but the C300 does which is good as loft is one of the key factors in performance. Unfortunately it did not help here as the carry was still the same and the higher spin made it a little less accurate at my 104mph swing.

Moving up to 12.5° seems a step too far as the face looked very closed and this is not unusual when you go to the extremes of an adjustable hosel as most clubs just seems to lose it for some reason, possibly because the head is slightly out of balance as the CG and MOI positions have been fiddled with. Therefore I would stick to the middle and low loft ranges all the time.

What you can also do to improve the launch is move the three weights around in the sole in what is grandly called Multi-Fit Adjustability 3.0. This translates as two white 6g weights and one black 2g weight that you position in three different points.

Starting with both 6g weights at the front at 10.5° gave some pretty low spin numbers, so I moved one of the 6g weights from the toe to the back to pull the CG back and give the head a little draw bias.

This did reduce the launch angle and the balance of the club must have suited me better as I got more ball speed and was more accurate even if I was a few yards longer.

To be honest, even at my above average swing speed I struggled to get the C300 driver going because it didn’t spin enough in the mid-range lofts.

The 45.5 inch Fujikura Speeder Pro 58 shaft is good quality, but the club felt a touch on the heavy side to swing even if the shaft is 58g.

Their other driver is this category is the Wilson Staff Triton and comparing the two at my optimum settings had the Triton generating the longer drives by around 4 yards carry, although the C300 was more consistent.

I would probably still go with the Triton though, because it felt lighter to swing and the interchangeable soleplates and wider weight positions seemed to have a greater effect on the flight.

And that is despite the looks and the sound of the Triton, although the C300 also sounds a bit crashy and has hit a few branches on the way down too.

I am trying to be positive about the Wilson Staff C300 as you feel it should do better than it does. Maybe it is for very high spin or high swing speed players and anyone else should only really consider starting with the 12° head and seeing if that produces better results as the spin is low.

That aside it does sound and feel good, but apart from that it is hard to justify it over its sibling and at this price it will have its work cut out against the rest of the market.