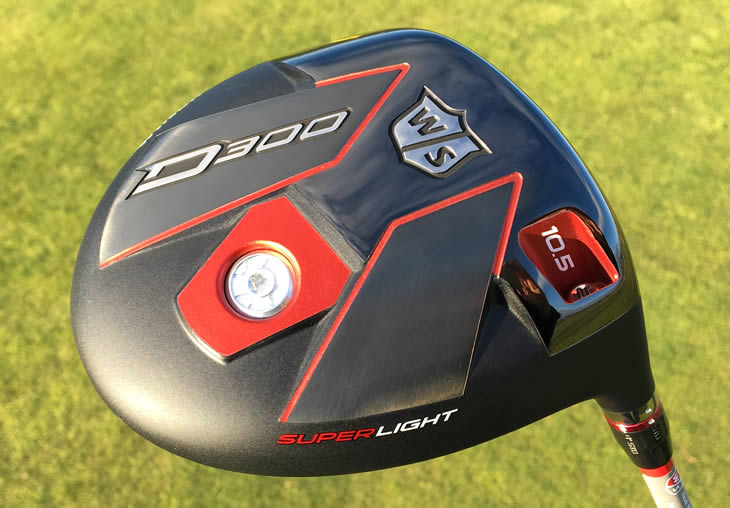 Wilson Staff D300 Driver – Once again Wilson are going heavy on the Right Light message for the D300 driver that means it is not light for the sake of it, but light in balance so that it does not affect performance. 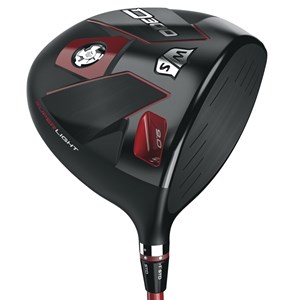 As drivers got very light a few years ago the weight was a big issue. Now most drivers are sub 300g so this is almost taken for granted, especially as graphite shafts are getting more stable as they get lighter.

As it is the Wilson Staff D300 is actually 5g heavier than the previous D200 driver at 273g but we all put on a little as we get on in life so we can let it off that small increase.

We are now back to the all-black finish of the D100 driver, which is bad news for all those who like a contrasting face colour for alignment at address.

However as the D300 loft is adjustable it will also mask any change in face angle when you change loft through the relatively small range of +/- 1° in a standard or draw setting.

It’s quite unusual for the range to be this small, but I actually like the approach as sometimes adjustable hosels with +/- 2° or more can feel a little too unbalanced at the extremes as the head is turned so far away from the neutral position.

It has a ‘Green Means Go Fast Fit’ line which when you see it as you slide out the shaft means that you can start to turn the head to adjust the loft without having to remove it completely, which makes life easier.

Unfortunately this hosel is not backwards compatible with previous Wilson drivers so if you have a favourite shaft you may have to get someone to switch the hosel connector for you.

Most of the rest of the shape of the head is similar to before. At address the D300 maybe looks a little more toe heavy at the back, but I don’t think there is much in it.

Of course the real difference is the Micro Vortex Generators on the crown which are there to disrupt the airflow over the head so that it stays attached for longer to reduce friction and increase club head speed.

This is a very different approach to other models that have the disruptor closer to the front of the leading edge and/or use a steeply descending crown to create the same effect.

Other models were showing a 1mph speed gain at 100mph and when I took both models on SkyTrak to check this out I did not see that much of a difference, but that was with different shafts in each due to the lack of hosel compatibility so it is not categorical.

However I can report that the D300 is longer than the D200 when used in the same 10.5° standard setting, which again is shaft dependent. Still, the lower spin and higher ball speed from the D300 face added an extra 4 yards carry which is significant.

The stock shaft now is the Matrix Speed Rulz A-Type 44 in a Dennis The Menace red and black livery that seems to have a little more lower down kick than the previous UST Elements Chrome shaft, which was probably more my thing.

Other than that there is a changeable weight in the sole, but one is not supplied so it is more for custom fitting and the slightly different styling produces a sound that is a little higher pitched than the D200, but still OK.

Like most manufacturers these days they are putting the sock sleeve suppliers out of business by going for a boxing glove style head cover.

All in all the Wilson Staff D300 offers a good level of forgiveness with decent performance for those who have a mid to slow swing speed.

Normally about now I would then go on to say that it is great value for money because Wilson has pitched it around £200 like the D200 and therefore you should try it if you are on a budget and want a quality driver.

The RRP is £80 more than the D200, which is a big jump, Brexit or no Brexit and puts it into direct competition with other aerodynamically enhanced drivers like the Callaway XR 16. Life could be tough for the Wilson Staff D300 if it is not up to speed when put head to head with models like these.