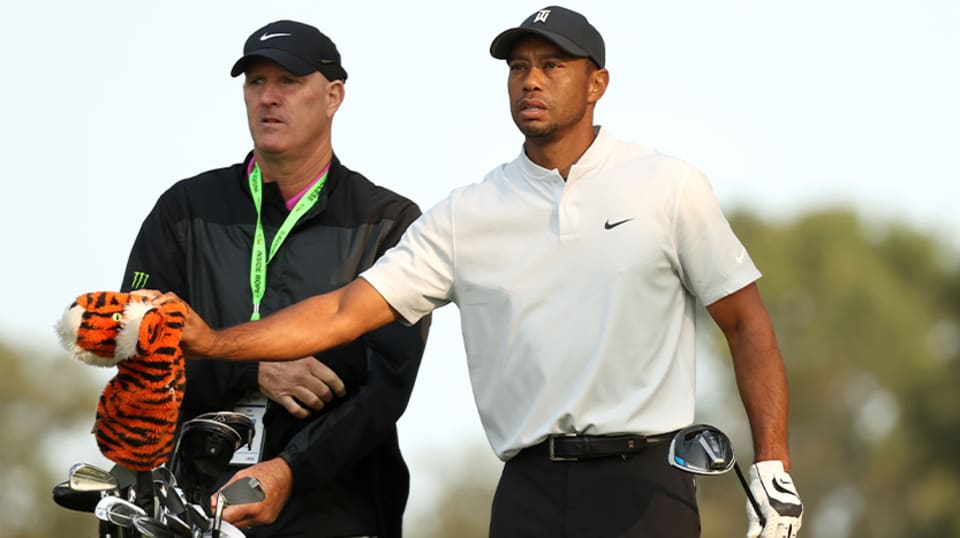 It really has become a true family affair at the PNC Championship for Tiger Woods and his caddie Joe LaCava.

With Woods set to play the event for the first time with his 11-year-old son Charlie, his regular bagman will also get to spend time on course with his progeny as Joe LaCava Jr. is set to carry the sticks for the younger Woods.

LaCava Jr. – a 22 year old senior at James Madison – has been called up to help out this week at the Ritz-Carlton Golf Club in Orlando.

“About a month ago Tiger approached me and said, ‘I’m thinking of playing the PNC Championship with Charlie.’ I was so jacked up. I was like, ‘Are you kidding me?’ because I thought it was probably a year or two away,” LaCava Sr. explained to Golf Digest.

“He was so excited. Charlie caught the golf bug this year. He’s been playing a ton of golf, practicing, working at it, and was psyched to play. Tiger was kind enough to ask me to ask Joe to caddie for Charlie so we could have a father-son caddie duo and father-son player duo. So we’re going to have a good weekend.”

While Joe Jr. hasn’t had a litany of experience as a caddie like his accomplished father, he is a decent golfer in his own right. The pair won the 2019 Connecticut Father-Son Net Tournament and enjoy getting out on the links together.

Joe Jr. is obviously excited by the prospect of having the best seat in the house for Charlie Woods television debut when it comes to competitive golf. Not to mention getting to see Tiger up close and personal in his element.

Charlie Woods has turned heads recently with solid results in junior golf tournaments in Florida but this is his first time in the spotlight. Tiger Woods makes his first appearance since finishing T-38 in his Masters title defense last month and will likely be the last we see of the 82-time PGA TOUR winner until the Farmers Insurance Open at Torrey Pines set to be held from Jan. 28-31.

“I’ve done a little caddying here and there for my buddies, but nothing really like this. I’m excited for it,” Joe Jr. said. “He (Dad) told me before he told my mom. I was super excited. I told all my buddies at school and they were definitely excited for me.”

The PNC Championship – formally known as the Father-Son tournament – brings together 20 major winning golfers and a family member. Other teams joining the Woods duo this year include former FedExCup winners Justin Thomas (with his father Mike), Vijay Singh (with son Qass) and Jim Furyk (with son Tanner). Plus the likes of Annika Sorenstam (with her father Tom), Bubba Watson (with his father in law Wayne Ball), John Daly (with his son Little John) and Gary Player (with his grandson James) are also in a stacked field.

You can check out how to watch the event here.