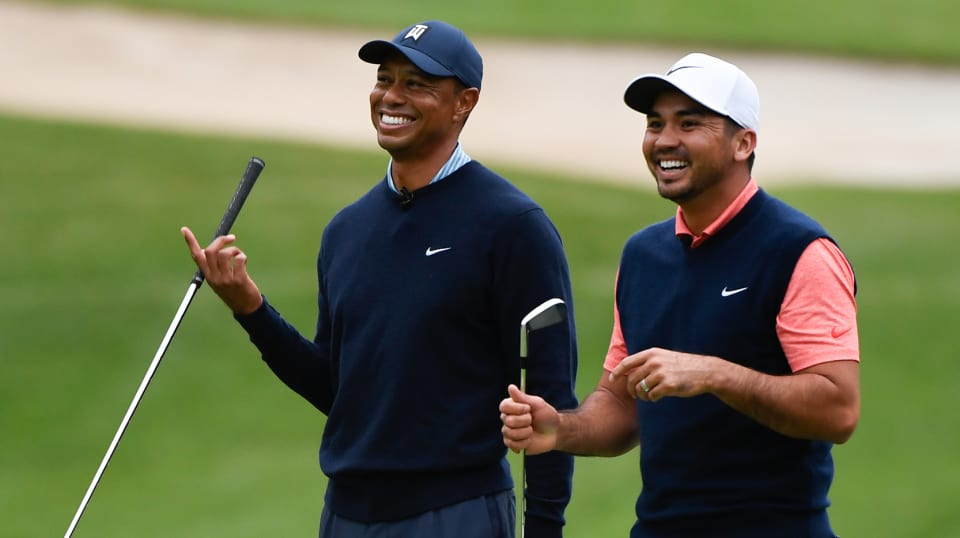 OLYMPIA FIELDS, Ill. – Jason Day might have to give some of his FedExCup bonus to Tiger Woods if he can manufacture a way to the TOUR Championship.

As both prepare for the BMW Championship at Olympia Fields this week needing top-four finishes to continue their seasons, Day revealed he has turned to Woods for advice on swing adjustments to help his longevity in the game.

Day and his long term mentor Colin Swatton recently parted ways and the Australian has been continuing on without a coach. But he hasn’t stopped asking for help. After battling chronic back issues throughout his career, Day has been trying to dial back his swing and has sought out 82-time TOUR winning Woods on the issue.

Woods, who has had four back surgeries including a fusion, has been forthcoming.

“Jason and I have had a great relationship for a very long time, since he’s been on TOUR and we’ve talked about a number of things, and obviously one of the topics we do tend to talk about because we both have bad backs now and mine is a little bit more progressed than his, is trying to deal with it, trying to manage it, and the evolution of the swing,” Woods confirmed.

“We can’t do what we used to do, and how do you evolve that and still be effective? But also (we talk) recovery from day-to-day. Recovery techniques have changed over the years and lifting protocols have changed.

“You can only swing the club how the body allows you to do, and I know that firsthand from all my nine previous procedures that I’ve had done to my body. It’s just one of those things that as we age we wear things out.”

Day has won 12 times on the TOUR but not since 2018. Over the last month or so he hit a positive stretch with four straight top-10s before missing the cut at THE NORTHERN TRUST. That leaves him 50th in the FedExCup and in need of a big week. Woods sits 57th, meaning they likely need to push towards the top four this week to advance to East Lake.

“Tiger has the best swing out there in regard to especially the iron swing. It’s amazing. He’s gone through some back issues, and I think he’s doing a lot of good things to try and alleviate his pain,” Day said.

“Obviously I’m still playing against Tiger, but he’s very open to me about the golf swing because of the specific questions that I’ve tried to ask him … I’ve asked questions and he’s willing to answer them, and I’m trying to make changes right now in my swing. I want to just slowly improve my swing to not only help the playing feel but also help my back along, too.”

Part of those changes is dialing back a little from when he was his most successful in 2015 and 2016 – a period where he went to world No. 1 and won seven times in 17 starts including a PGA Championship, two FedExCup Playoffs events, a World Golf Championships and THE PLAYERS Championship.

In 2015, Day averaged 120 mph club head speed; these days he’s around 117 mph. He’s also working on more finesse with his game having predominantly gone hard at all swings in the past.

“I definitely don’t swing it as hard as I had in the past. I still can. I can get the club speed up to 120 and the ball speed can get up to 180 easy if I want to, but I just don’t try and do that anymore because, A, I don’t think it’s great on my back going that hard, especially with the way I’m swinging it right now, and B, I’m putting more of a premium on trying to hit the fairways,” he said.

“I’ve been working a lot more on feel shots, quarter, half shot, three-quarter shots. I don’t hit a lot of full swing shots really typically anymore with my irons because I feel like I lose a little bit of control there and then that can obviously put a little bit of added pressure on my back.”

Woods and Day will need plenty of good feel shots if they are to progress to the TOUR Championship next week.

“This is a big week for me. I’m looking forward to getting out there and playing and competing.

This golf course is set up more like a U.S. Open than it is a regular TOUR event, but this is the Playoffs. It’s supposed to be hard,” Woods said.

“Last week I think might have been a little outlier because of the weather. The greens were soft and receptive, and the majority of the field went low and then DJ went absurdly low. That won’t be the case this week. Pars will be at a premium, putting the ball in the fairway and trying to keep the ball in the correct spots.

“The greens are quick, hard and firm for now. The weather is supposed to be really hot the next three days and maybe breaking Friday night. But until then this is going to be a very difficult golf course.”