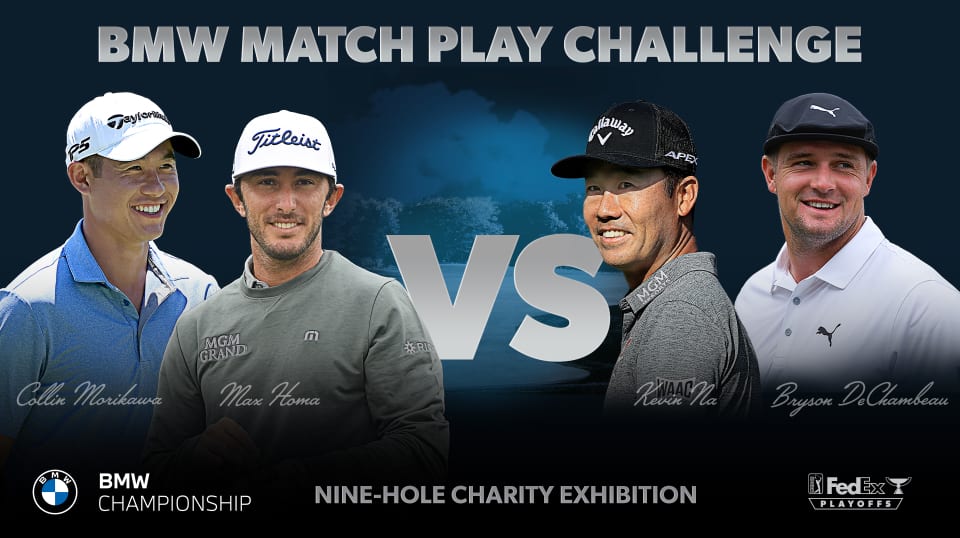 The match will take place on Wednesday, Aug. 26, on the back nine of Olympia Fields Country Club’s North Course. Rising star and 2020 PGA Championship winner Collin Morikawa will team up with fellow California alum Max Homa to take on the eighth ranked player in the world, Bryson DeChambeau, and four-time PGA TOUR winner Kevin Na in a six-point Scotch Match.

Coverage of the exhibition match will air from 2-4 p.m. (CDT) as a special presentation of PGA TOUR LIVE and will be simulcast on Golf Channel, GOLFTV (internationally) and other PGA TOUR media platforms, including PGA TOUR social channels.

During the match, the two-man teams will compete to earn points that result in donations to the Evans Scholars Foundation. Six points will be available on each hole, and skills challenges on holes 11 and 15 will enable the teams to score bonus points.

“With so many families impacted by the COVID-19 crisis, we’re seeing an even greater need to help young men and women afford the high costs of pursuing a college education,” said Vince Pellegrino, WGA senior vice president of tournaments. “This event will give us a great opportunity to raise awareness and funds for the Evans Scholars Foundation, so we can award more college scholarships to deserving youth caddies.”

The BMW Championship will establish a full tuition and housing scholarship, valued at $125,000, in the name of the winning team, while an additional contribution of $1,000 for each point scored by the winning team will also be made.

Fans can join the fundraising efforts and support the Evans Scholars Foundation’s mission of sending caddies to college by visiting www.bmwchampionship.com. Olympia Fields members will match all online donations during tournament week.

Joining the PGA TOUR players during the match will be Steve Sands, the lead interviewer for NBC’s golf coverage, and Evans Scholars Erin Cronin and Oscar Garcia, who will serve as standard bearers for the competition.

The Evans Scholars Foundation, which sends caddies to college on full tuition and housing scholarships, is the sole beneficiary of the BMW Championship. Since 2007, the BMW Championship has raised $35 million for the Evan Scholars Foundation to help send more than 3,000 students from across the nation to college. This fall, 1,045 students will be enrolled at 19 universities nationwide as Evans Scholars.

The 2020 BMW Championship is the penultimate event of the PGA TOUR FedExCup Playoffs and features the top 70 PGA TOUR players vying to earn one of 30 spots in the season-ending TOUR Championship. Olympia Fields Country Club will host the BMW Championship from Aug. 27-30, with all four rounds of the event to be broadcast live on NBC and the Golf Channel.

To learn more about the 2020 BMW Championship, please visit www.bmwchampionship.com.