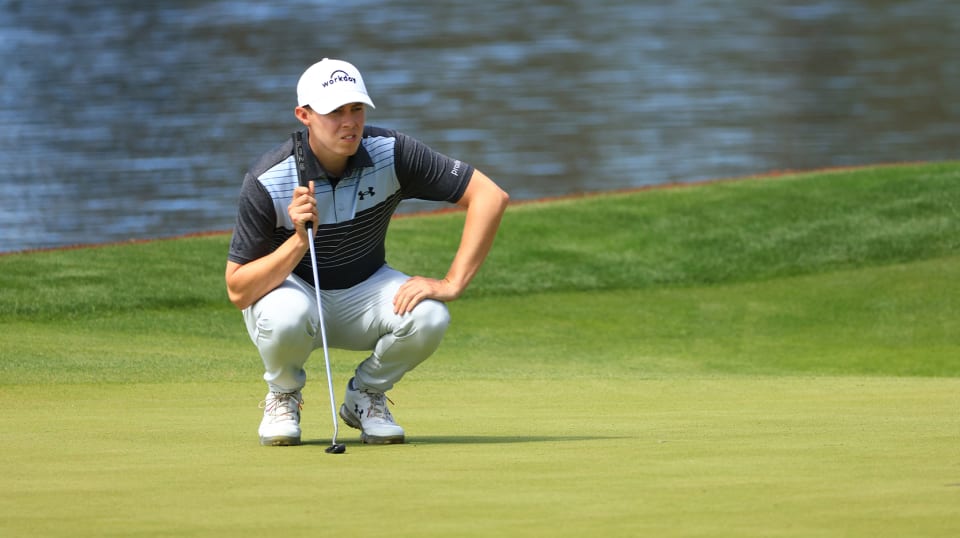 PONTE VEDRA BEACH, Fla. – Order has been restored to THE PLAYERS Championship.

By which of course we mean absolute and utter disorder.

Just as there’s nothing but a hot week that connects the winners here – short-knockers like Fred Funk (2005), long-ballers like Davis Love III (1992, 2003) – only a hot first two days connects those on the first page of the leaderboard this year.

Wait. Check that. Not all the leaders have even been so hot. Bryson DeChambeau (69, 6 under, three back), who is coming off a win last week, has found just 12 of 28 fairways, near last (T136) in driving accuracy. “I’ve been pretty lucky, for the most part,” he said.

Momentum! That’s the key. Leader Lee Westwood (66, 9 under) was coming off a runner-up to DeChambeau at the Arnold Palmer Invitational presented by Mastercard, and has simply kept it going at TPC Sawgrass. Players absolutely, positively must come in on a roll if they want to thrive at the glorious wrecking ball that is the Stadium Course.

Oops. Never mind. Denny McCarthy, who aced the 165-yard third hole on the way to a second-round 69 to reach 6 under, came into this PLAYERS having missed six of his last eight cuts.

Xander Schauffele (72, 4 over total) and Viktor Hovland (74, 2 over), who had the longest made cuts streaks at 23 and 22, respectively, will miss the cut once the second round is complete Saturday morning.

Your feeble brain is losing momentum because it can find no rhyme or reason, no order. Golf is all about order. There are 14 clubs in a bag, 18 holes on the course, 154 players in the field. Add it up and …

Resumé! That’s the ticket. If you’re going to contend to win the big one, the crown jewel of the PGA TOUR, you’d better have paid your dues by racking up a few other victories.

Nope. McCarthy, Matthew Fitzpatrick (68, 8 under, one back), and Doug Ghim (67, 6 under) are vying to become the first to make THE PLAYERS their first win since Tim Clark in 2010.

You know it can’t be done, making sense of a PLAYERS leaderboard.

Age! There’s no substitute for seasoning. Just look at Westwood, who will be 48 next month.

Um, well, but … Ghim, the only player other than Westwood to go bogey-free Friday, is just 24. Fitzpatrick is 26, McCarthy 28.

You look again at the leaders, desperate for some sort of organizing principle. And there it is. Chris Kirk, who holed out for eagle from 147 yards at the first hole on the way to a 65 to reach 7 under, two back, won The King & Bear Classic at World Golf Village – about a half hour from here – in a rehab start on the Korn Ferry Tour last summer.

McCarthy, who is seventh in Strokes Gained: Putting this week, won the 2018 Korn Ferry Tour Championship at Atlantic Beach C.C., which is only 25 minutes in the opposite direction.

Geography. That’s predictive, right? Players who have won here, or near here, are more likely to do well. Because look at Sergio Garcia, the 2008 PLAYERS champion, who flew out of the gate with an opening 65. He made his third eagle so far this week at the par-5 11 hole on the way to a second-round 72 on Friday and will be well in contention this weekend. Yes!

No. Winning THE PLAYERS once isn’t predictive of doing it again. Rory McIlroy, this week’s defending champion, of sorts, since he hoisted the gold trophy in 2019, doubled the 10th hole for the second straight day, shot 75 (10 over total) and will be home in Jupiter this weekend. Henrik Stenson, the ’09 champ, was thrown for an opening 85 before rebounding, sort of, with a 74.

Then there’s Phil Mickelson, who won here in 2007 but had missed six of his last seven cuts at the Stadium. He’d recently fallen out of the top 100 in the world for the first time since President Clinton’s first term, and at 50 looked ever closer to going full tilt on PGA TOUR Champions.

And so, naturally, Mickelson is inside the cut line after shooting a second-round 72 (1 under total). This, despite losing his tee shot in a bush at the short, par-4 12th hole (triple-bogey), and leaving a shot in the sand at the par-5 9th hole (up and in for par), his last hole.

Length! Yeah, that’s what matters. DeChambeau is No. 1 in driving distance this season, so clearly brawn is coming to the fore. Except that little lefty Brian Harman, who is No. 133, is tied with him after signing for a 71.

Nope, there is no template. Not this year, not any year. Westwood, incidentally, would be the first Englishman to raise the trophy here. So would Fitzpatrick. Whatever happens, the 2021 edition of this epic test of will and skill will be one of a kind, just as all the others were before it.

That’s what makes it THE PLAYERS.