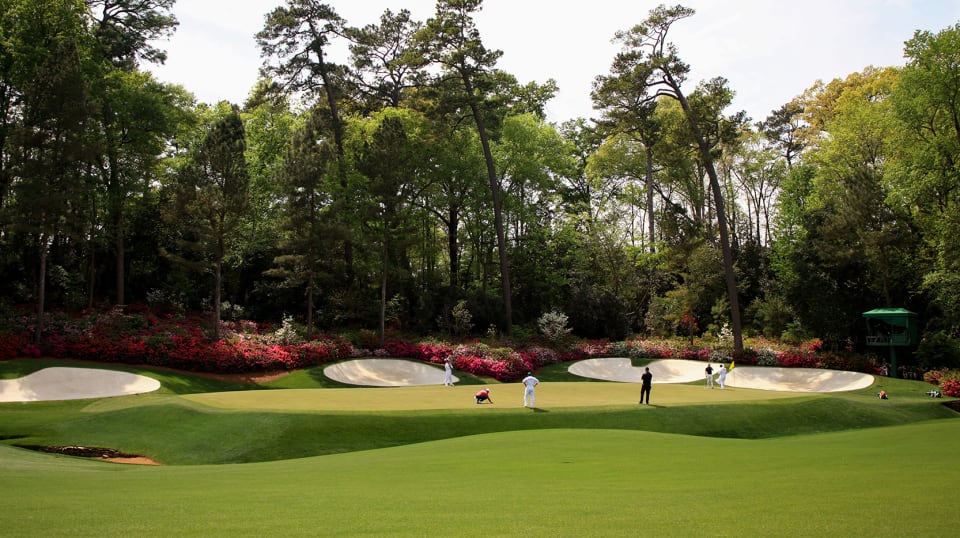 After Dustin Johnson shot a record-setting 20-under 268 last year, we could be looking at the first Masters since 2017 that’s won with score that’s single digits under par. That was the year Rose lost in a playoff to Sergio Garcia.

“I feel sorry for the guys who played their first Masters in November,” said Kevin Kisner.“They’re walking out there today wondering what the hell is going on.”

Even though players knew what was coming Thursday, they struggled to score. On Monday, the conditions were already comparable to what we’re accustomed to seeing on a Sunday, when courses traditionally play their toughest. Simpson was standing in the 14th fairway Thursday with a 9-iron in hand and he didn’t envision a way that he could hit the green. “Sure enough, it went over the green,” he said. Even short irons are bounding across these baked-out putting surfaces.

An inconsistent breeze – which made shot selection a guessing game – added to the challenge.

“It can go from blowing 15 (mph) to 0 pretty quick out here,” said Brooks Koepka.

Jon Rahm arrived at Augusta National on Wednesday after the birth of his first child. New parents often speak glowingly about the perspective they’ve gained. Everything else seems less important than the little child you’re now responsible for. It’s often a perfect recipe for good golf because the 6-foot putts suddenly feel less stressful.

Augusta National wasn’t interested in providing a warm welcome, however.

“There was not one moment where … I felt relaxed out there,” Rahm said after shooting 72.

We saw chip shots roll across the 15th green and into the water. Some putts didn’t stay on the putting surface.  The patrons were back for the first time in two years but roars were rare. Players were on the defensive. Some of the Kansas City Chiefs were in attendance Thursday but this first round was more like facing the Steel Curtain.

Hideki Matsuyama, who shot 70, said, “I’ve never seen the greens so firm and fast.” This is his 10th Masters.

Kisner teed off before 9:30 a.m. He described the start of his round as a “nice, casual stroll around Augusta.” Sounds nice. By the time he got to the second nine, it was more like “a roller-coaster.” His scorecard showed it. Kisner made eight pars and one birdie on the first nine. His final nine holes featured two birdies, an eagle, a triple-bogey and two bogeys. He shot 1-over 37 on that side with just three pars.

There is some hope for a respite. This week’s warm temperatures have contributed to the conditions, but Augusta National also let the course get this firm because of rain that is forecast to come in the next three days. There is no guarantee of precipitation, though. There’s a 40% chance of rain Friday and Sunday and a 60% chance Saturday. But even a little rain won’t be enough to substantially slow this fast track.

Said two-time Masters champion Bernhard Langer, “This is the way it should be.”