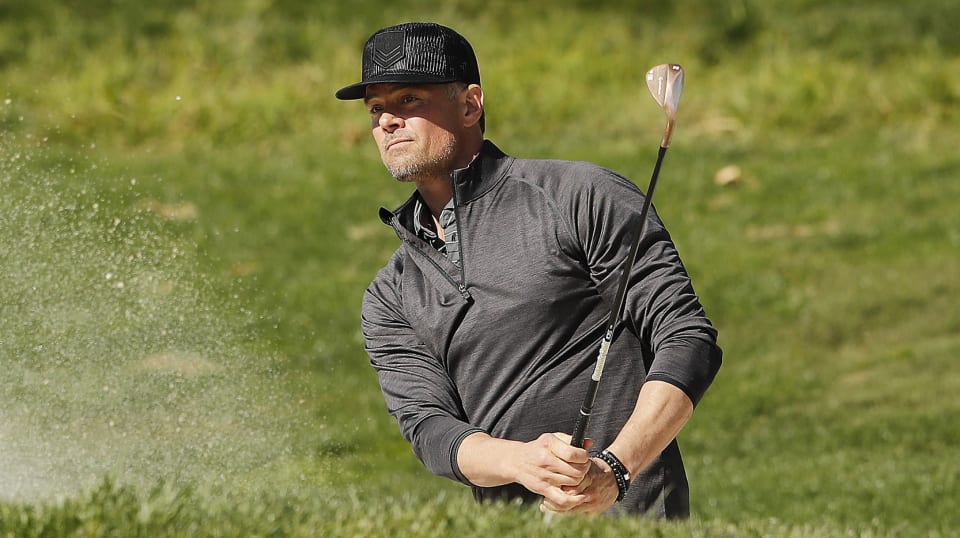 BLAINE, Minn. – You may remember him as Col. William Lennox in “The Transformers” franchise. Or, your memory may go all the way back to his breakthrough role on “All My Children” in 1999.

Josh Duhamel has worked steadily in Hollywood for more than two decades, booking starring roles in movies and on television. But the 47-year-old actor is a Midwesterner at heart, and his happy place is his 53-acre ranch in Minnesota.

Duhamel, who grew up in Minot, North Dakota, was back home, of sorts, on an unseasonably cool Wednesday morning at the 3M Open. The avid golfer, who is a 3M brand ambassador, was there along with Minnesota Vikings tight end Kyle Rudolph, to help unveil the tournament’s “Power of Community” mural.

After the ceremony, Duhamel, whose family comedy “Think Like a Dog,” was released last month, took a few minutes to talk golf with PGATOUR.COM. He also stars in “Jupiter’s Legacy,” a series about superheroes and their kids, that is slated to be released on Netflix in 2021.

PGATOUR.COM: When did you start playing golf?

JOSH DUHAMEL: “Since I was a kid; I started back in North Dakota. I should’ve been a lefty, but my dad wouldn’t buy me clubs. So, I had to learn how to play right. Played hockey left and batted left-handed, but I had to learn to play (golf) right-handed. But it’s been a part of my childhood. The golf season back in North Dakota is about three weeks. So, I didn’t have the same amount of time we would in California, Florida or anywhere else. But it’s been a love of mine forever.

“To be able to be invited, to come up to something like this and sort of spread the word about what 3M is doing for golf on the science side of it  and also how they’re leveraging this to help the community, especially in a time like this, I think is  amazing. So, I’m really happy to get to be a part of it.”

PGATOUR.COM: You were quite an athlete growing up. You played quarterback at Minot State. Did you take to golf immediately or was it an acquired taste?

DUHAMEL: “I remember as a kid, I think when you learned something like this at a young age, you don’t necessarily develop bad habits. You just get up there and swing. So, for me it was just about hitting the ball, hitting the ball, hitting the ball. The more I think about it, the worse I get. So, I have to really just go back to my childhood. For me, it’s just about joy. I don’t really care about my score anymore. I just go out there and enjoy being outdoors and just take it. You couldn’t ask me what I got for score on the last hole. I’m just out there basically daydreaming all day. And that’s what I love about the game.”

PGATOUR.COM: You’ve played at the AT&T Pebble Beach Pro-Am several times. What do you like about that event?

DUHAMEL: “I don’t think I’ve ever taken for granted that invite. You get that invite in the mail and it’s always like Christmas. It’s like, oh my God, I got invited back. And so, I’ve had so many great memories. I took a second in it one year. I took third another other year with Tony Finau, who I just saw walking down the fairway here. I’ve had some of the most embarrassing moments in my life, out there in front of everyone, but I’ve also had some of the most glorious moments of my life — making shots I never thought I could make, really under pressure in spots. So, for me, as an amateur it’s fun to be out there and just to get a taste of what it’d be like to be a pro golfer.”

PGATOUR.COM: What is your favorite golf memory?

DUHAMEL: “Golf for me is about, it’s meditative in a lot of ways. It’s been a way for me to connect with friends, with family, my sister, my mom, my dad loved golfing. It’s always been something that is just fun to go out and do. And, you know, I especially loved going out around sunset. That’s my favorite thing to do – have a beer, play nine or 18 holes, and just go out there and just, it’s been a really sort of connective tissue for both friends and family for me.”

PGATOUR.COM: Did you get to play much during the pandemic?

DUHAMEL: “A little bit. I spent most of my time at my cabin, actually. I have a cabin out in the woods here in Minnesota on this beautiful little lake. And so, I’ve just been using the time to get out of L.A. and go out and chop wood and clear brush and paint the deck and just do it just all. I built a little beach on my shore front. So, stuff like that and also getting to bring my son out there. So, for him to be able to come out and experience that kind of stuff, that kind of the way I grew up. You know, living in Los Angeles, I think that’s important for him.”

PGATOUR.COM: How did you get involved with 3M?

DUHAMEL: “They reached out to be a part of the tournament. I mean, this was, this would have been early in a year or late last year and we have a little production company that I said, well, you know, why don’t we help you guys activate some of these things like this? So, we’re shooting a lot of this stuff. We’re going to shoot the 3M Open Compass Challenge [Wednesday]. Just some of the stuff around the tournament to sort of show what this place is like, what they’re doing for the community, get a chance to maybe talk to some of the golfers, and just get a feel for the tournament. Unfortunately, it’s not going to be like it would be had virus not been around. Because it would’ve been a big thing. But still there’s so much to see. And I think it gives us a chance to show, aside from the fanfare of it all, to show what a tournament like this can do for a community.”