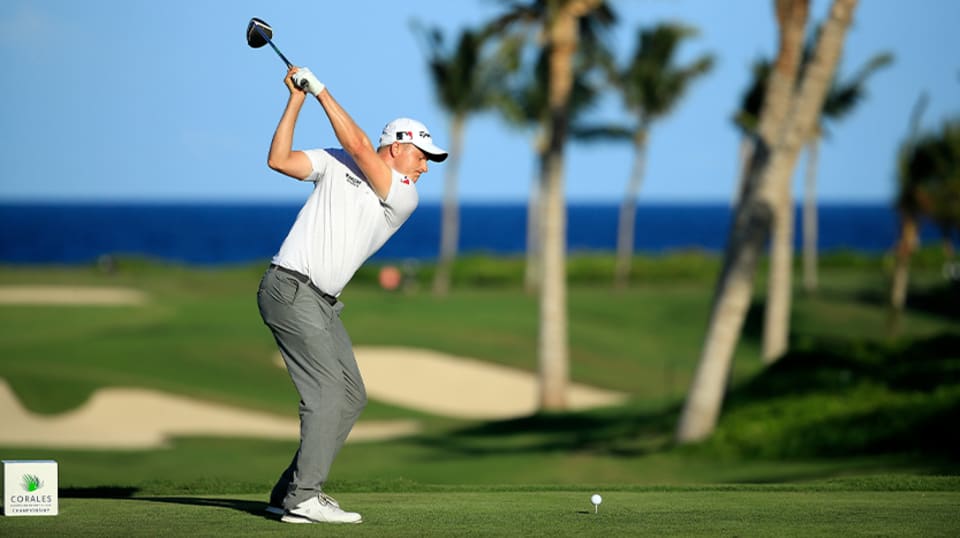 After just missing out on playing in the TOUR Championship last season, Adam Long is already motivated early in the 2020-21 campaign to get to East Lake.

Long fired an 8-under-par 64 Saturday at the Corales Puntacana Resort & Club Championship and leads by two heading into Sunday’s final round. He’s looking for his second PGA TOUR victory after winning The American Express in 2019 as a rookie.

Although Long captured his maiden TOUR title in 2019, he missed 16 cuts and finished 69th on the FedExCup standings that season.

Last season he was much more steady. He missed only seven cuts and notched two runner-up results (at the Mayakoba Golf Classic and the 3M Open) but he ended up 31st on the FedExCup standings.

Long just missed a spot at East Lake after Mackenzie Hughes (his playing partner Saturday at Corales) converted a par save on the 72nd hole at the BMW Championship to earn one of the final spots up for grabs at the TOUR Championship.

“That was tough, honestly,” said Long of being the-guy-on-the-bubble a few weeks ago. “I was inside the number down the stretch those last handful of events and just didn’t get it done. I didn’t play well enough to do it.

“Obviously there were a lot of scenarios that could have happened that would have helped me get in, but I didn’t take care of my own business.”

Long said being on the cusp of earning a spot at East Lake made him realize how important the events on the fall portion of the TOUR schedule are in the long run.

“I already kind of knew that, but these tournaments matter in September and October. At a couple of points (during the season) I was only (outside the top-30 in the FedExCup standings) by a couple of points,” he said.

“I want to get there. I know that I’ve proven that I can and I know that I want to. I was pretty close last year obviously, so it would be a dream. That’s a big goal of mine this year.”

Long has leaned on his putting to get him to the top of the leaderboard through three rounds in the Dominican Republic. On Saturday at Corales he had nine one-putts on his last 10 holes.

“It was nice when those days are like that where you’re just kind of feeling the putter and you’re just making putts,” said Long. “It was nice. I wasn’t thinking about a whole lot of things, I was just trying to make everything.”

Long’s 64 is tied for the low round of the week so far. He made four birdies on both the front and back nines Saturday, including rattling off three-in-a-row on No’s 12-14.

“I didn’t have much going today and I was watching Adam play awesome, so it was like getting run over by a semi,” said Hughes of Long’s Saturday stretch. Hughes chipped in twice on the back nine en route to making three birdies in a row and will be in the penultimate pairing Sunday.

Long, who finished 13th on the 2018 Korn Ferry Tour Regular Season money list to earn a TOUR card, is one of 12 players in the Dominican Republic who was also at the U.S. Open a week ago.

He finished T13 there, his highest such result in a major championship.

It’s a big contrast from Winged Foot this week, he said, but he’s taken the adjustments in stride.

“That was just such a mental grind; it was just trying to hit a fairway,” said Long of the U.S. Open setup. “This is more about making birdies, so it’s been a bit of an adjustment getting used to different greens and all that.

“But I’ve been (to Corales) before and I’ve always liked coming here, so I’m here.”

Now he’s trying to get back to another place he’s been before – the PGA TOUR winner’s circle – in hopes of getting somewhere he’s not yet been: TOUR Championship.